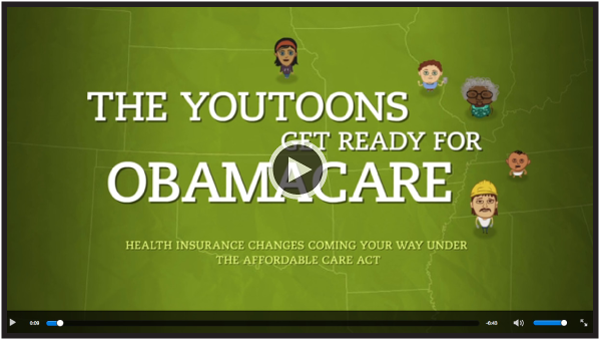 With major parts of the Affordable Care Act (ACA) going into effect in 2014, the Kaiser Family Foundation released a new animated video to help people understand the health care system changes on the horizon. “The YouToons Get Ready for Obamacare” explains the basic changes in the way Americans will get health coverage and what it will cost starting in 2014, whether it’s through their employer, Medicaid, Medicare, or buying insurance on their own with the help of federal tax credits.

Written and produced by the Foundation and narrated by former ABC News anchor Charlie Gibson, a member of the Foundation’s Board of Trustees, the animation was developed to inform and educate Americans about what will – and what will not – change under the ACA. The April 2013 Kaiser Health Tracking Poll found that 42 percent of Americans were unaware that the ACA is still the law of the land, and about half of the public said they did not have enough information about the health reform law to understand how it would impact their own family. The video serves as a how-to guide to help viewers understand what benefits they qualify for and what they can do to prepare for open enrollment starting October 1, 2013. A Spanish-language version of the video will be released in the future.

“The reality is that nearly every American will be touched by the Affordable Care Act in ways small and large, and many will face important decisions this fall,” said Kaiser Family Foundation President Drew Altman. “This cartoon is meant to demystify a complex law and explain what it means for you, whether you support or oppose Obamacare.”

“The YouToons Get Ready For Obamacare” is just one of many resources on the Foundation’s website to help the American public better understand health care reform. Other resources include a health insurance subsidy calculator, an interactive ACA implementation timeline, frequently asked questions, and a ten-question quiz about the law. The Foundation will be producing new consumer-friendly informational materials to explain the ACA as implementation of the law proceeds. Additionally, the Foundation’s news service, Kaiser Health News, will work with partner news organizations to cover implementation and explain the law.

Watch the new animation and share the video with family and friends. Organizations are also welcome to embed the video on their websites or blogs.