As government officials, community organizations and advocates gear up the consumer information and assistance efforts that will surround this fall’s open enrollment for the health insurance exchanges created under the Affordable Care Act (ACA), much of the public remains confused about the status of the health law, according to the April Kaiser Health Tracking Poll. Four in ten Americans (42 percent) are unaware that the ACA is still the law of the land, including 12 percent who believe the law has been repealed by Congress, 7 percent who believe it has been overturned by the Supreme Court and 23 percent who don’t know whether or not the ACA remains law. And about half the public says they do not have enough information about the health reform law to understand how it will impact their own family, a share that rises among the uninsured and low-income households. When it comes to where they are getting information about the law, Americans most commonly cite friends and family, “newspapers, radio news or other online news sources”, and cable news. About one in ten report getting information from a health insurer, their doctor, an employer, or a non-profit organization. Similar shares say they have gotten information from “federal agencies such as the Department of Health and Human Services” or “state agencies such as your state Medicaid office”.

As the federal government, state governments and other stakeholders gear up for public information campaigns tied to the October start of open enrollment in the ACA’s health insurance exchanges, Americans report that thus far they have been relying most heavily on their own personal networks and the news media for information about a law that continues to be only dimly understood by many. The most commonly cited sources of information in Kaiser’s April Health Tracking Poll are friends and family (named by 40 percent), “newspapers, radio or other online news” (36 percent), and cable news (30 percent).

Thus far, about one in ten Americans report getting any information from a health insurance company, their doctor, an employer, or a non-profit, and few name any of these as their most important source of information. About the same share (9 percent) report having gotten information from “federal agencies such as the Department of Health and Human Services,” with little difference across demographic groups. Eight percent say they have gotten some ACA information from “state agencies such as your state Medicaid office or health department,” a share which doubles among African Americans (17 percent). The poll provides a rough baseline before more intensive public information and consumer assistance begins. 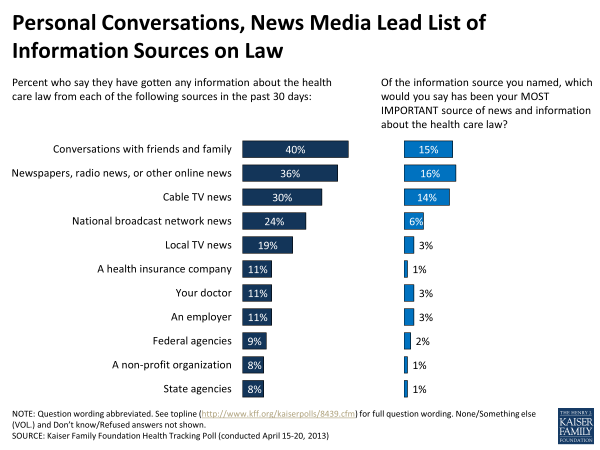 Despite the fact that the uninsured and lower income are less likely to have learned about the ACA from friends or the news media when compared to higher income, insured Americans, personal conversations along with the news media still remain the most commonly reported sources of information among these groups.

Asked whether they had heard mostly good things, mostly bad things or a mix of the two from their primary information source, most Americans said they had gleaned a bit of both. To the extent that the information did tilt one way or the other, more said they had heard negative things about the law than positive, whether their main source of information was cable news, other news sources, or their friends and family.What about people who don’t approve of the Affordable Care Act: are they getting their information about the law from the same sources as the law’s supporters? This month’s survey finds those with unfavorable views of the law for the most part are getting their information from the same sources in the same shares as those with favorable views, though they are somewhat more likely to report getting information from friends and family (50 percent compared to 40 percent) and from cable news (37 percent compared to 29 percent). They are also nearly three times as likely to report getting information from an employer: 17 percent of ACA opponents say they have gotten ACA information from an employer, compared to 6 percent of supporters.

At this early stage, before the launch of most public campaigns, about one in four Americans already say they’ve seen or heard an ad having to do with the health care law, though more of these are being perceived as having a point of view on the law than are seen to be strictly informational in nature. Among those who said they had seen an ad, slightly more reported seeing a negative ad (19 percent of the public overall) than a positive one (12 percent of the public). About one in ten Americans report seeing an ad that provided information about how to get coverage under the health care law.

Meanwhile, the April tracking survey provides continuing confirmation of the amount of confusion still surrounding the status of the Affordable Care Act, with four in ten Americans unaware that the ACA is still the law of the land and is being implemented.2 This share is higher among certain populations the law was specifically designed to help; for example, six in ten of those in households making less than $30,000 a year are unable to say the law is still in force, as are half of younger Americans.

Not surprisingly, then, about half the public (49 percent) says they do not have enough information about the health reform law to understand how it will impact their own family, a proportion which rises to 56 percent among those non-elderly living in low-income households, and 58 percent among the uninsured. Also notable: Hispanics are more likely than whites or blacks to report they do not yet have enough information about the law to understand how the ACA will affect their families (65 percent of Hispanics say so, compared to 48 percent of blacks and 45 percent of whites).

More Favor Making Changes To Law Than Defunding It

Overall, the public remains as divided as ever when it comes to their overall evaluations of the health law. This month, 35 percent report a favorable view, 40 percent an unfavorable view, and a full 24 percent report they have no opinion on the law, continuing a recent trend of particularly high shares not offering an opinion. Partisans remain quite divided, with a majority of Democrats in favor (57 percent) and most Republicans opposed (67 percent). 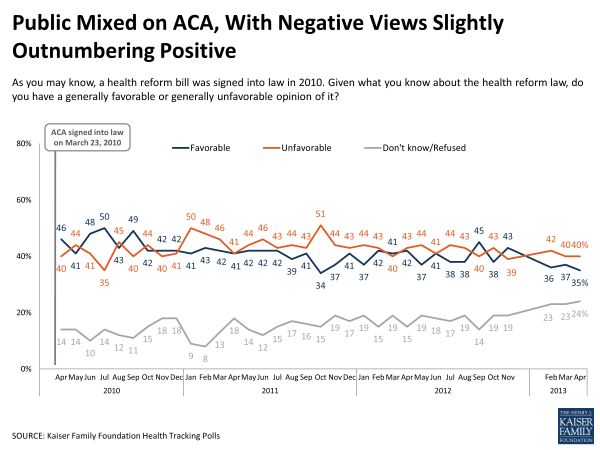 In terms of the law’s political future, just over half of Americans (53 percent) continue to say that they approve of efforts by opponents to change or stop the law “so it has less impact on taxpayers, employers, and health care providers”, a view which theoretically encompasses a range of positions from hard-core repeal supporters to those who believe the law only needs minor tweaks. One in three (including more than half of Democrats) believe that the law’s opponents should accept that it is the law of the land and stop trying to block its implementation, down somewhat from January (33 percent now compared to 40 percent at the start of the year).

Still, a majority of Americans continue to oppose the idea of stopping the law by defunding it in Congress. Overall, 58 percent say they disapprove of cutting off funding as a way to stop some or all of the law from being put into place, 31 percent approve. While Republicans are significantly more likely than Democrats or independents to give their blessings to this tactic (51 percent do), 37 percent disapprove of defunding the law. 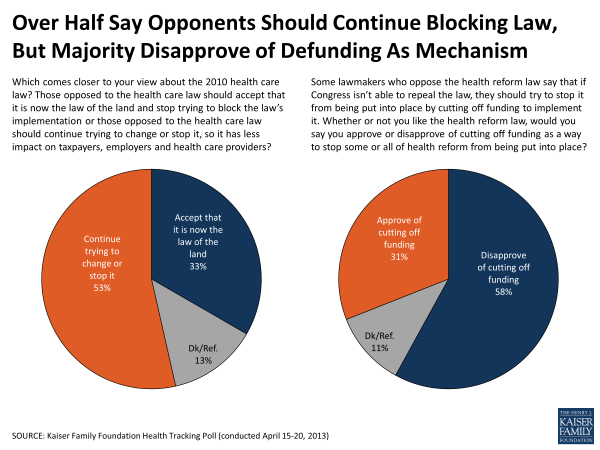 With state by state deliberations on the future of the ACA’s Medicaid expansion ongoing, a somewhat larger share of Americans favor having their state expand Medicaid than favor keeping their state’s program as it is today (50 percent versus 41 percent). These percentages have been roughly stable since last summer, and even providing both sides with a counterargument currently does little to change people’s minds, as the chart in Figure 7 shows. 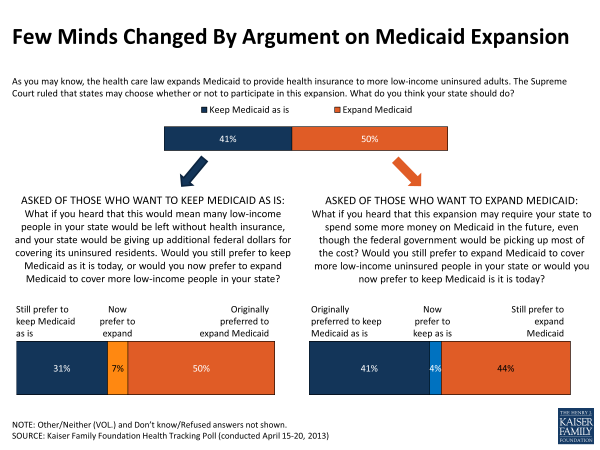 Americans, like their leaders, are divided on this issue by their partisan affiliation: seven in ten Democrats would like to see their state expand its Medicaid program under the ACA, while roughly the same share of Republicans would like to keep their state’s program as is, and independents are divided. Another way to look at it: among those who like the law, most (75 percent) want to expand their state’s Medicaid program. Among those who don’t like the law, most (67 percent) want to keep Medicaid’s status quo in their state.

As experts try to keep up with the complicated decision-making going on in some states over the future of their Medicaid program, three in four Americans say they don’t know enough to say what their state’s leadership has decided on the issue.