With the approaching launch of the second open enrollment period for the Affordable Care Act’s (ACA) health insurance exchanges and at a time when open enrollment is also happening for many job-based plans, the Kaiser Family Foundation conducted a nationally representative survey of 1,292 U.S. adults to shed light on Americans’ understanding of basic health insurance terms and concepts, and to identify gaps in awareness that could lead to difficulties for some individuals as they choose new plans or use their health plans.  If you want to test your own knowledge of health insurance terms and concepts before reading on, you can take the 10-question quiz online.

When asked a series of questions about health insurance terms and concepts, including some that require calculating out-of-pocket costs, over half of the public (52 percent) scored an impressive grade of at least 7 out of 10 right answers, but only 4 percent answered all 10 questions correctly.  On the other side of the spectrum, nearly three in ten (28 percent) gave correct answers to 4 or fewer questions, with 8 percent giving no correct answers at all. 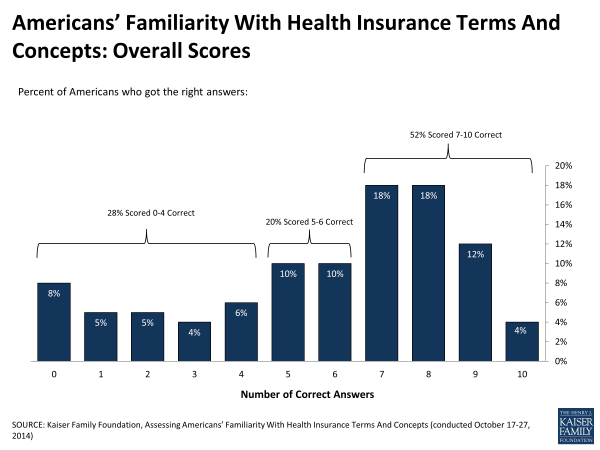 Of the 10 questions asked, 6 proved relatively easy for the public to answer, with at least two-thirds answering each correctly.  About eight in ten (79 percent) responded correctly that a health insurance premium must be paid every month, as opposed to only in months when health care services are used.  Large majorities were also able to correctly identify the definitions of insurance terms like premium (76 percent), provider network (76 percent), annual deductible (72 percent), and annual out-of-pocket limit (67 percent). Over two-thirds (68 percent) also know that if a health plan refuses to pay for a medically recommended service, an insured person has the right to appeal the plan’s decision. 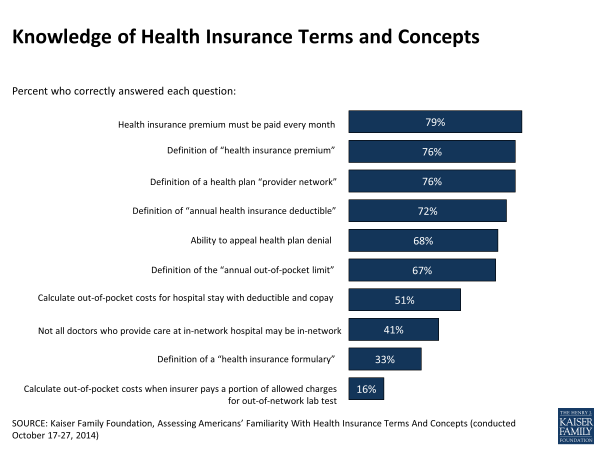 Four other questions proved more difficult for people to answer.  Two of these questions asked respondents to calculate the amount they would have to pay out of their own pocket in different care-use scenarios. Although these questions may seem to be testing math skills rather than health literacy, math skills are an important component in understanding the complicated maze of health insurance payments and billing. Just over half (51 percent) were correctly able to calculate how much they would have to pay for a 4-day hospital stay with a $1000 deductible and $250-per-day copay. Far fewer – only 16 percent – could correctly calculate how much they would have to pay for an out-of-network lab test when the insurer pays 60% of allowed charges.

Many Americans are also confused about the term “health insurance formulary,” with only a third (33 percent) identifying the correct definition (a list of prescription drugs covered by a health plan). Another 14 percent selected an incorrect definition of formulary, and over half (53 percent) said they didn’t know.

Where Are The Biggest Gaps In Awareness?

Some groups are more likely than others to demonstrate a better understanding of health insurance terms and concepts, while certain groups may be less familiar with health insurance.  Those who scored lower on this health insurance literacy quiz include people with lower levels of education, younger Americans, and the uninsured.  There was not a significant difference between the average scores of men and women.

Education has a strong correlation with health insurance literacy, with those who never attended college significantly less likely than those with college degrees to answer health insurance questions correctly.  For instance, nearly all college graduates (93 percent) identified the correct definition of a health plan’s provider network, compared to 60 percent of those with high school education or less. Average overall scores range from 4.5 correct items for those who never attended college, to 6.1 among those with some college education, to 7.2 for college graduates.

The survey also sheds light on the information needs of younger Americans, who demonstrate a lower level of understanding of health insurance concepts than older Americans.  For example, about four in ten (39 percent) of those ages 18-29 were able to correctly calculate the out-of-pocket cost for a hospital stay with a given copay and deductible, compared with over half of adults over age 30. A similar gap exists in understanding the nature of a health insurance premium.  While 63 percent of younger adults correctly indicate that premiums must be paid every month – not only when health care services are used – this is at least 15 percentage points lower than among older age groups. On average, adults under age 30 answered 4.7 questions correctly, compared with scores of 5.7 for those ages 30-49, and 6.4 for those ages 50 and over.

Perhaps most importantly, given that open enrollment is around the corner, this survey uncovered a significant information gap among the uninsured, with substantial shares expressing a lack of familiarity with health insurance terms and concepts. Uninsured Americans under age 65 (who also tend to have fewer years of education) have lower average quiz scores than those with insurance (average 4.4 correct versus 6.2), and are more likely to answer zero questions correctly (13 percent versus 4 percent).  For example, fewer of those ages 18-64 without health insurance correctly identified the definition of a health insurance premium (57 percent) compared to those with health insurance (83 percent).  While some uninsured people provided incorrect answers, across the 10 questions asked, about a quarter or more of the uninsured selected “don’t know” rather than picking an answer.

Most U.S. adults appear to have a pretty firm grasp on basic health insurance terms and how insurance works in general.  Understanding is lower in some areas, however, including calculating out-of-pocket costs and knowing that an insured person might get care from an out-of-network doctor at an in-network hospital.