Will GOP Candidates’ Positions on Obamacare Matter in Crowded Field?

This was published as a Wall Street Journal Think Tank column on August 25, 2015. 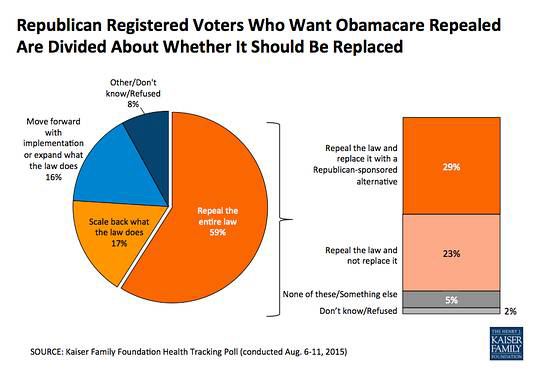 Kaiser Family Foundation polling of Republican registered voters in August 2015 finds divided views on whether the Affordable Care Act should be repealed and/or replaced.

Taking on the Affordable Care Act is de rigeur for Republican candidates, but Republican voters are not of one mind about Obamacare–and the different positions candidates take may not have much effect on their primary prospects.

Republican presidential candidates Scott Walker, Bobby Jindal, and Marco Rubio have put forth plans to replace the ACA. But the proposals are not detailed enough to analyze their likely impact. (Sen. Rubio’s approach, for example, was laid out in an op-ed.) We can, however, analyze the political strategy here.

With every Republican candidate feeling compelled to establish his or her anti-ACA bona fides, distinguishing between their positions will be challenging  for voters. Some will call for repeal and not much more. Others will outline a general direction and only a few steps they would take to “reform” health care. Some may offer more comprehensive ACA replacement plans. Ohio Gov. John Kasich has broken with the pack somewhat by taking a stance that is anti-ACA but pro-Medicaid expansion on pragmatic and moral grounds.

Campaign rhetoric may give the impression that the ACA is a threshold issue for Republican voters, but polling indicates that it is just one of many issues GOP voters care about. In the Kaiser Family Foundation’s August tracking poll, 69% of Republican registered voters said they would consider a candidate’s views on the ACA as one of many factors determining their vote; just 12% said they would “only vote for a candidate who shares their views on the ACA.” Eighteen percent said this issue would not be a factor in their vote. The findings suggest that Republican candidates are not likely to win many primary votes based solely on their ACA positions. But it is still likely that all will make some effort to neutralize any advantage other candidates might get on the issue.

Separately, a challenge for those candidates offering replacement plans is that Republican voters are somewhat divided on what they would like Congress to do next about the ACA. As the chart above shows, 59% of GOP registered voters favor repeal; within this share, 29% support replacing the repealed ACA with a Republican alternative, and 23% say the ACA should be repealed but not replaced. A separate 17 % said they would like to see the ACA scaled back, 8% want it expanded, and 8% would like it implemented as-is. There is no groundswell of support–at least not yet–among the Republican base for replacement plans. That could be because there is no consensus replacement idea around which to coalesce, or because voters are tiring of the debate, or for other reasons. Meanwhile, ACA implementation is progressing, and the law is somewhat more popular than it was during its troubled rollout in 2013. These make it a tougher target than in times past.

As President Barack Obama learned, a plan can quickly become a target. Candidates with replacement plans will face questions in the media and criticism from Democrats if they don’t have a proposal, if their plan covers fewer people than the ACA does, and/or if their plan provides weaker insurance protections. They may also face criticism from conservatives and opponents. Gov. Jindal said of Gov. Walker’s plan: “It is frankly shocking that a Republican candidate for President would author a cradle to grave plan like this.” Sen. Orrin Hatch (R., Utah) noted in 2012 that “Conservatives cannot allow themselves to be browbeaten by failing to provide the same coverage numbers as Obamacare. . . . To be clear, it is a disgrace that so many American families go without health insurance coverage. But we cannot succumb to the pressure to argue on the left’s terms.”

Candidates may fine-tune their ACA strategies to appeal to slices of the Republican electorate. Overall, however, it’s not clear that any position will distinguish one candidate from the others in a crowded field.