This was published as a Wall Street Journal Think Tank column on August 19, 2015. 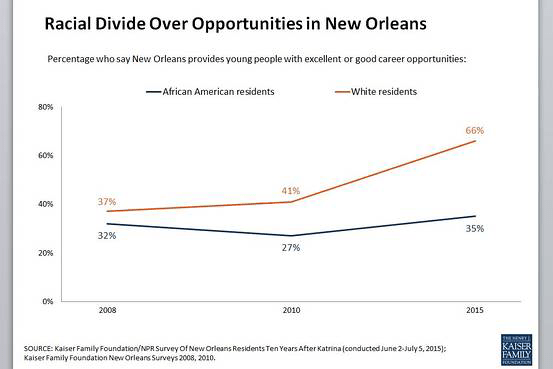 Blacks and whites in New Orleans have very different views of the opportunities available to young people and whether the city is a good place for children to grow up, and the racial divide in how residents view these basic measures is widening. These and other findings of a comprehensive study of New Orleans a decade after Hurricane Katrina highlight the progress that can be made in urban America and the issues underlying our debates about race.

Last week the Kaiser Family Foundation released its fourth comprehensive survey of New Orleans residents since Katrina hit and the levees failed 10 years ago. This fourth survey was conducted in partnership with NPR, which has been reporting the results. Kaiser also conducted a survey of evacuees in the Houston shelters with the Washington Post in 2005.

There is a remarkable sense of progress in New Orleans, with a majority of residents saying the city has mostly recovered from Katrina. Seventy-three percent of residents say the city is moving in the right direction and 78% are optimistic about its future. When asked about a broad range of challenges to recovery, residents gave New Orleans the highest marks for repairing the levees, attracting new businesses, and making health and transportation services more available. Fifty-nine percent of New Orleans residents said a lot or some progress has been made improving schools, while 38% said not too much or no progress has been made. Crime was the issue for which residents say there has been the least improvement, with 64% saying not too much or no progress has been made. Mistrust of the police by African American residents–a national issue after racial incidents in Ferguson, Mo.; Baltimore; and other places–emerged as a raw nerve in the survey. 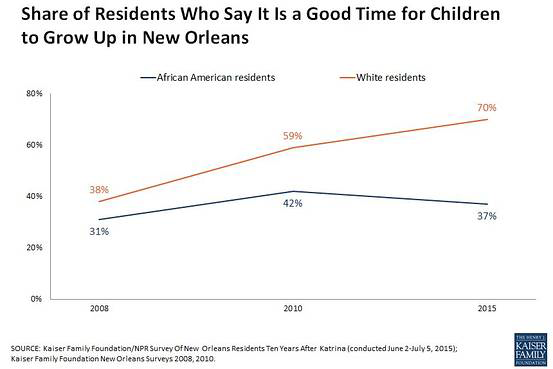 Looking across the results of surveys conducted in 2006, 2008, 2010, and 2015, a trend is striking: the widening gulf between blacks and whites when it comes to residents’ sense of opportunities for younger people in the city, something our surveys began tracking in 2008. As the chart at the top shows, 66% of whites think New Orleans offers good career opportunities for young people, while only 35% of blacks say that. The gap between blacks and whites on this issue has widened dramatically, from a five-point difference in 2008 to a 31-point gap this year. The other chart shows an almost identical split between whites and blacks since 2008 on another question we asked: whether it is a good time for children to grow up in New Orleans. The divide in New Orleans stems more from differing perceptions of opportunity than from race relations. Neither blacks nor whites reported seeing a change in race relations in the city; 56% of blacks say race relations are the same in New Orleans as they were before Katrina. Fifty-eight percent of white residents say the same thing.

New Orleans is iconic, partly because of its music and culture and now, unfortunately, the legacy of Katrina as well. The remarkable progress in New Orleans over the past decade shows how a city can respond to a catastrophe and what can be accomplished with financial resources and political will. But as debates about race and policing continue around the country, the experience of New Orleans also reminds us of the deeper economic and social problems in U.S. urban areas.