This was published as a Wall Street Journal Think Tank column on February 19, 2015. 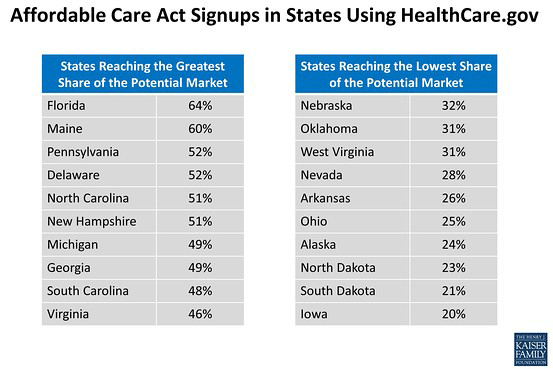 The Obama administration announced this week that 8.6 million people had signed up for coverage in the 37 states using HealthCare.gov and estimated that an additional 2.8 million had signed up in states operating their own exchanges during the Affordable Care Act open-enrollment season that closed Sunday. The vast majority of those who signed up are expected to pay their premiums and enroll in insurance plans.

Beneath these numbers lies significant variation in the enrollment experiences in the states using HealthCare.gov. The aggregate national enrollment figures get a lot of attention in Washington and in the media amid the ongoing debate about the health-care law–but the state numbers can be more revealing.

As the chart above shows, in six states more than half of the potential market signed up, but in seven states less than 30% did. Florida led the way, with 64% of the potential market and 1.6 million people signed up. Iowa was at the bottom of the list, with 20% and 45,000 people signed up. Enrollment also varied a lot within states, with some counties reporting large gains late in the open-enrollment period.

Some of the lessons from high and low state sign-ups will take time to discern. Differences in outreach were a big factor, but the makeup of the uninsured populations in these states may have played a role. State-specific issues also had an impact. For example, the governor of Nevada embraced the ACA, but Nevada’s state-run Web site stumbled and the Silver State switched over to using HealthCare.gov. Substantial enrollment occurred despite the anti-ACA attitudes and actions of governors or legislatures in some states. Many of the states where the highest shares of the potential market signed up would be considered anti-ACA states. Texas did not fall into the top or bottom 10 states, but 1.2 million people enrolled there, raw numbers that put the Lone Star State behind only Florida among states using the federal exchange. California, which operates its own exchange, reported this week that 1.4 million people had signed up for coverage.

Overall, the enrollment data underscore a central aspect of the ACA: It is debated nationally as a monolith, viewed as good or bad depending on partisan perspectives; but in practice, there are 50 different ACAs that vary across virtually every dimension the law touches, including enrollment.

The data also underscore the potential impact of King v. Burwell, the case pending before the Supreme Court that questions whether premium subsidies can be provided to people buying coverage in the federal exchanges. About 87% of those who sign up and enroll in insurance plans in states that use HealthCare.gov receive premium subsidies; without them, most of those people would not be able to afford coverage. If the court rules for the plaintiffs and states don’t act, people would lose their subsidies after whatever grace period the court chooses to impose.