This was published as a Wall Street Journal Think Tank column on February 17, 2015. 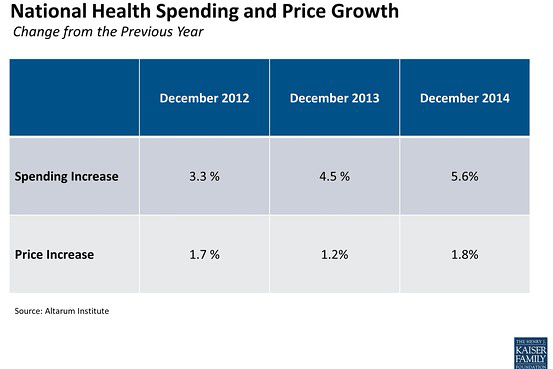 As people hear that health spending is beginning to grow more quickly again, many may recall reports they may have read recently about the shockingly high cost of some medical procedure, or how much a hospital CEO is being paid, or what they pay for their own prescription drugs. The prices Americans pay for health services are a big problem, but the culprit behind the renewed growth we are seeing in spending is not the rising price of health services.

There is an excellent series of reports from the nonprofit Altarum Institute analyzing this. Altarum’s Center for Sustainable Health Spending is a leading source of economic analysis on health spending and costs. As the chart above–based on preliminary estimates from Altarum–shows, health spending grew 5.6% in December over the preceding year; it was up 4.5% in December 2013 compared with December 2012; and the 2012 figures were up 3.3% from the previous December. But health-care prices in December 2014 were just 1.8% above those in December 2013. Hospital prices grew just 0.9% in 2014. Drug prices have been rising more rapidly: 6.4% between December 2013 and December 2014. That can be a problem for consumers, but drugs represent 10% of national health spending so it doesn’t contribute a lot to overall spending increases.

There are many reasons to focus on high prices in health care even if they are not currently a big driver of growth in national health spending. High health-care prices can be a real burden to consumers and a barrier to care in an era when deductibles and cost-sharing are growing and when people are paying more out of pocket for their health care. And because people without health coverage don’t have insurers and employers negotiating with providers on their behalf, they are most likely to have to pay the highest health-care prices.

But purely from a numbers perspective, growth in prices does not seem to be the main reason for growth in health spending, which is trending back up as the economy improves and as more people get insured under the Affordable Care Act. There is no guarantee that price increases in health will remain modest. As long as they do, however, we need to get a better handle on the amount of services and the kinds of health services provided, even more than price growth, if we are to moderate the increases we are beginning to see again in national health spending.