This was published as a Wall Street Journal Think Tank column on August 3, 2015. 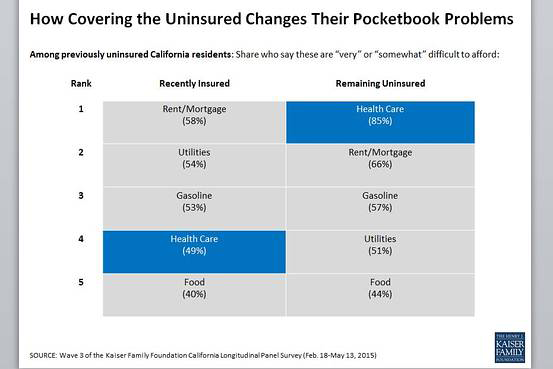 Discussions of expanding health coverage and improving economic security for working Americans don’t overlap much–but they are connected. As the chart above shows, when lower- and moderate-income people gain health coverage, the burden of paying health-care bills is eased and they are able to focus on other pocketbook issues.

That’s one conclusion from a recently released panel survey of Californians uninsured before the Affordable Care Act took effect. The Kaiser Family Foundation survey, which aimed to gauge the impact that health coverage has on enrollees’ lives, found that 85% of those who remain without coverage in California say it is “very” or “somewhat” difficult to afford health care. Difficulty paying for health care far exceeded trouble paying the rent or mortgage (66%), as well as paying for gas (57%), utilities (51%), or food (44%). But paying health-care bills disappears from the top spot on the list of problems for people who got health insurance since the Affordable Care Act took effect in California. Fifty-eight percent said their top problem was paying the rent or mortgage; paying for health care moved to fourth (49%) on these people’s hierarchy of pocketbook problems.

As trouble paying health-care bills declined, people’s ability to meet their health needs increased: 51% of those who now have coverage said that when they were uninsured their health needs were being met. Once they got coverage, 86% said so.

Our national debate about the value of covering the uninsured is mostly waged in the health arena. It focuses on how much coverage does or does not improve access to health services and the impact coverage has on health outcomes (something determined by many factors beyond health insurance). Meanwhile, there is another, mostly separate debate about providing greater income security to working people and the middle class–and addressing income inequality. This takes place mostly outside the health-care arena and is waged, mostly, by a different set of experts and advocates. The chart above shows how the two are connected: When people have coverage, they can pay their health-care bills and focus their family budgets on other needs.