This was published as a Wall Street Journal Think Tank column on Jul7 27, 2015. 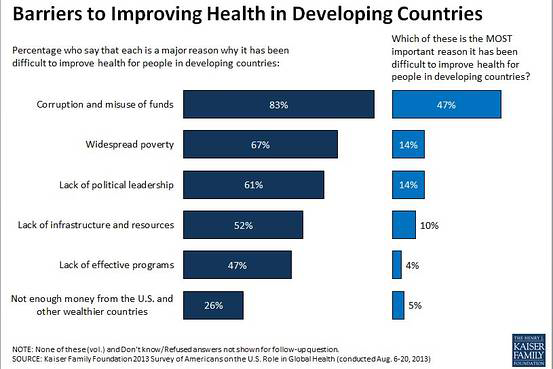 Many Americans are skeptical about foreign aid because they believe a large share of U.S. assistance is lost to corruption. When it comes to global health, as the chart above shows, 83% of Americans say corruption and misuse of funds is a barrier to improving health in developing nations, and 43% say it is the most important barrier. Corruption is a problem. World Bank President Jim Kim has called it “public enemy number one.”

So it was of no small consequence when UNAIDS announced this month that the global goal adopted in 2011 of getting 15 million people on HIV antiretroviral treatment by the end of 2015 had been met nine months early.

Don’t be surprised if you haven’t heard much about this; there was coverage elsewhere of the pledge but little, if any, national media coverage in the U.S. That could reflect general inattention to global health by U.S. media or a news judgment that meeting goals set by international bodies is not news when the overall picture on global HIV remains mixed. About half of those who are infected worldwide don’t know it, and funding for HIV has leveled off since the Great Recession, which makes sustaining progress more difficult.

But this goal being met means that millions of lives have been saved, and much of the funding for this work was provided by the U.S. government and, ultimately, taxpayers. The goal was met, in part, because the cost of treatment in developing countries has fallen dramatically, another success. One particularly noteworthy turnaround: South Africa, which early on was a notorious laggard in addressing HIV, now has the largest treatment program in the world.

Meeting this goal and doing so early does not prove that there is no corruption in global health efforts. Far from it. But public attitudes toward corruption and aid suggest that successes like this one don’t get enough attention.