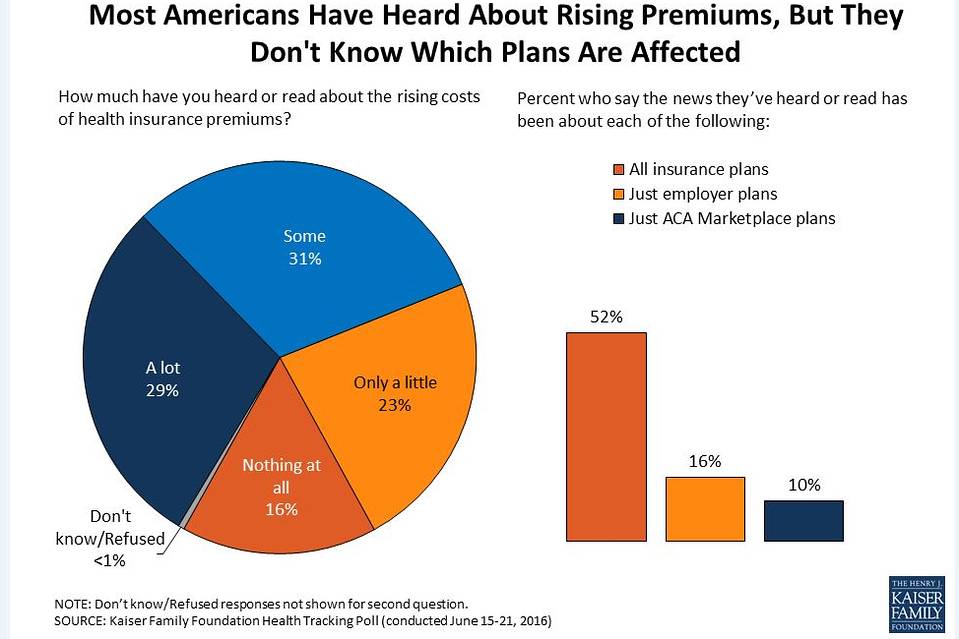 “Limited empirical validation” is a fancy social science term for using an anecdote to make a broader point that is not actually supported by the evidence. That’s what Donald Trump did recently at a campaign event when he touted a proposed 60% increase in Blue Cross premiums in the Affordable Care Act marketplace in Texas. This was accurate. Mr. Trump also predicted further huge increases, timed for after the election, that he suggested would lead to the downfall of the ACA.

News reports across the country are mentioning outsize proposed premium increases from some plans in some marketplaces.

Many news reports have been careful to say that these outsize increases are not typical, nor the whole story. But there is a wider misperception about Obamacare premium increases: Many Americans insured through their employers wrongly believe that these large premium increases apply to them though only a much smaller group is affected.

As the chart above shows, more than 80% of Americans have heard or read news reports about premium increases that have focused on proposed increases in the ACA marketplaces. Sixty-eight percent think those increases apply to all insurance plans or to employer plans, through which 154 million Americans get coverage. In fact, they apply only to the ACA marketplace plans, through which about 11 million people are enrolled. Just 10% of the public understands that the increases they were hearing about apply only to marketplace plans.

Every year health premiums go up by some amount. When people see stories about rising ACA marketplace premiums, they may read or hear only the headline, or identify the problem and think it applies to their premium or employer premiums too. The chart above also shows that while a lot of people have followed the story, only 29% say that they had heard “a lot” about it.

Critics of the ACA have had some success blaming it for general problems in the health-care system. People may read news stories on premium increases as validating criticisms they have heard about the ACA.

People may also not know when an outlier is an outlier. They may read about proposed 20%, 30%, or  40% increases in premiums for a marketplace plan in their state and not know whether the average increase across all plans is lower, whether it will affect their plan, or that they can shop for a much cheaper plan. A Kaiser Family Foundation analysis of commonly selected benchmark “Silver Plans” in 14 major cities found that the proposed average increase was 10%. That double-digit annual increase is about twice the size of increases in the group market, but it is far less than the 60% in Texas that Donald Trump recently mentioned. And, notably, most people in the marketplaces do not pay the premium increases; 85% receive government-funded premium subsidies. The government–meaning the taxpayer–pays.

It would help counter public misperceptions if news reports explained that the proposed increases apply to only some of the 11 million people in the ACA marketplaces–and not everyone in the marketplaces or the 14 times as many people insured through their employer, people whose premiums are rising at historically moderate levels. The more than 100 million people covered by Medicare and Medicaid are also unaffected in all this.

The news media’s core job is to find and cover the news. Still, whether the issue is health care, Islam, or climate change, news reports fill knowledge gaps and correct misperceptions. There isn’t anyone or anything else in our system fulfilling such a role right now.