This was published as a Wall Street Journal Think Tank column on June 30, 2016. 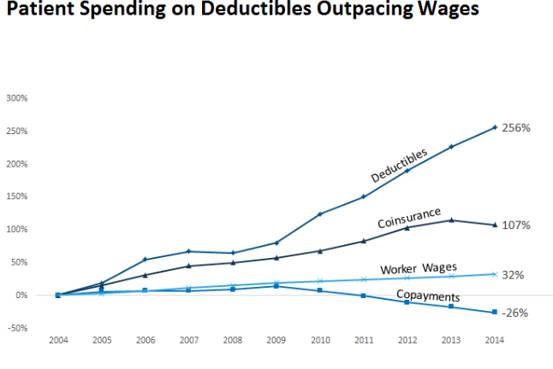 With 91% of the population now covered by some form of health insurance, and the coverage rate higher in some states, the next big debate in health policy could be about the adequacy of coverage. That particularly means rising payments for deductibles and their impact on family budgets and access to care. This is about not just Obamacare but also the many more people who get insurance through an employer.

Rising payments for deductibles cause people to use less health care and have played a role in the moderation we have seen in recent years in the growth of health spending. That rate of growth has begun to tick up but remains moderate by historical standards. Ever larger deductibles may dampen growth in spending but can also be a significant burden for many family budgets and a barrier to care for the chronically ill.

They can also change the relationship between patients and health-care providers by focusing interactions more on the price of health services, though patients often have trouble comparison shopping for health care, even when pricing tools are available.

Rising payments for deductibles could also affect longtime patterns in the politics of health care. The health-care industry has generally favored Republicans and their health proposals. But Democratic proposals to improve benefits or limit cost-sharing could mean more business for health-care providers, while Republican legislation to increase deductibles or other forms of cost-sharing could mean less demand for their services and more unpaid medical bills. This may be one reason the industry has generally not aligned with Republican efforts to repeal the Affordable Care Act. In the coming years the industry may pick its spots on specific legislative issues based on its interests, with a less consistent partisan alignment.

It’s not clear whether deductibles will continue to rise as they have over the past decade. Rising cost-sharing is not employers’ preferred strategy  for containing health costs, but it’s the one they resort to when they need to quickly reduce their annual premium increase. If the economy weakens again employers will feel greater pressure to reduce their health-benefits costs, and the trend toward higher deductibles will be more likely to continue. The question of how much cost-sharing is too much, and what to do about it, could be the next big debate in health care–once the political world moves on from its focus on the ACA.