Just-released estimates of national health spending in 2010 by the Centers for Medicare and Medicaid Services (CMS) show that 45% of our health care spending is financed by the federal and state governments, primarily through the Medicare and Medicaid programs. This share has grown temporarily in recent years because of the economic downturn, as private insurance has declined and Medicaid has grown. It has also increased due to our demographic destiny: the growing cohort of baby boomers who are retiring and shifting from employer-sponsored health insurance to Medicare.

As Kaiser Family Foundation President and CEO Drew Altman has written, this is hardly evidence of an “imminent danger of a government takeover” of the health system. In fact, if one slices the pie in a slightly different way – looking at how health benefits are managed, rather than how they are financed – it becomes clear that in some ways quite the opposite is true: we are increasingly relying on the private insurance industry to provide health coverage. And, even when coverage is publicly-managed, health care services are primarily purchased from private providers.

So, out of the 255.3 million people with health coverage in 2010, at least 73% were in private insurance arrangements. This share is likely to grow starting in 2014, when major elements of the Affordable Care Act (ACA) kick in. Many of those currently uninsured will buy private insurance through new state-based exchanges, and others will be covered through expanded eligibility in Medicaid, likely more often than not in a managed care plan. (The Congressional Budget Office projects that Medicare Advantage enrollment will decline as a result of the ACA, but that effect is small relative to the newly-insured.) 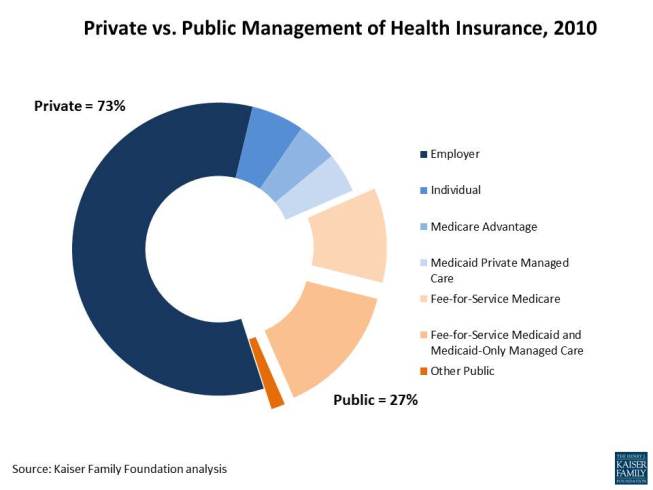 There’s no doubt that the expansion of private insurance for managed care in public programs in recent years has been important for the insurance industry. A recent Bloomberg Government study examined the financial performance of the nation’s private insurers, concluding that the “biggest contributor” to recent revenue and enrollment growth “has been a substantial expansion in the companies’ Medicare Advantage and Medicaid managed-care businesses.” Across the health system, we pay a price for this reliance on private insurance in terms of higher administrative costs. The McKinsey Global Institute estimates that the U.S. spends nearly five times as much as the average for all OECD countries on administrative costs on a per capita basis.

The question is, will our bet on private insurance help to control costs over time? Recently, private insurance premiums – like the rest of the health care system – have been growing quite slowly. In 2010 premiums increased by 2.4%, according to the CMS estimates. This is largely the result of slow growth in the use of services, likely driven by the recession and increases in patient cost-sharing. Whether, and by how much, utilization will pick back up when the economy recovers is an open question. If premiums once again start to accelerate, insurers may come under growing pressure to demonstrate their value to the system.