The Trump Administration has finalized regulations that significantly broaden employers’ ability to be exempt from the Affordable Care Act’s (ACA) contraceptive coverage requirement. The regulations open the door for any employer or college/ university with a student health plan with objections to contraceptive coverage based on religious beliefs to qualify for an exemption. Any employer, except publicly traded corporations, with moral objections to contraception also qualify for an exemption. Their female employees, dependents, and students will no longer be entitled to coverage for the full range of FDA approved contraceptives at no cost.

These final regulations are very similar to the October 2017 Interim Final Regulations that were issued without an opportunity for public notice and comment, as required under the Administrative Procedure Act. Four nonprofit advocacy groups and 8 states filed lawsuits challenging those regulations. In the cases led by California and Pennsylvania, the federal courts issued preliminary injunctions in December 2017, blocking the enforcement of these regulations pending the outcome of the litigation. These decisions have been appealed to the 3rd and 9th Circuit Courts of Appeal.1 The status of these lawsuits is unclear now that the final regulations have been published. In any event, it is likely that there will be new legal challenges to the final regulations.

How do the new regulations change contraceptive coverage requirements for employers?

Since they were announced in 2011, the contraceptive coverage rules have evolved through litigation and new regulations. Most employers were required to include the coverage in their plans. Houses of worship could choose to be exempt from the requirement if they had religious objections. This exception meant that women workers and female dependents of exempt employers did not have guaranteed coverage for either some or all FDA approved contraceptive methods if their employer had an objection. Religiously- affiliated nonprofits and closely held for-profit corporations were not eligible for an exemption, but could choose an accommodation. This option was offered to religiously-affiliated nonprofit employers and then extended to closely held for-profits after the Supreme Court ruling in Burwell v. Hobby Lobby. The accommodation allowed these employers to opt out of providing and paying for contraceptive coverage in their plans by either notifying their insurer, third party administrator (TPA), or the federal government of their objection. The insurers were then responsible for covering the costs of contraception, which assured that their workers and dependents had contraceptive coverage while relieving the employers of the requirement to pay for it.

As of 2015, 10% of nonprofits with 5,000 or more employees had elected for an accommodation without challenging the requirement. This approach, however, has not been acceptable to all nonprofits with religious objections.2 In May 2016, the Supreme Court remanded Zubik v. Burwell, sending seven cases brought by religious nonprofits objecting to the contraceptive coverage accommodation back to the respective district Courts of Appeal. The Supreme Court instructed the parties to work together to “arrive at an approach going forward that accommodates petitioners’ religious exercise while at the same time ensuring that women covered by petitioners’ health plans receive full and equal health coverage, including contraceptive coverage.”3

On November 15, 2018, the Trump Administration issued final regulations that greatly expand eligibility for the exemption to all nonprofit and closely-held for-profit employers with objections to contraceptive coverage based on religious beliefs or moral convictions, including private institutions of higher education that issue student health plans (Figure 1). In addition, publicly traded for-profit companies with objections based on religious beliefs also qualify for an exemption. There is no guaranteed right of contraceptive coverage for their female employees and dependents or students. Table 1 presents the changes to the contraceptive coverage rule from the Obama Administration in the Final regulations issued by the Trump Administration. 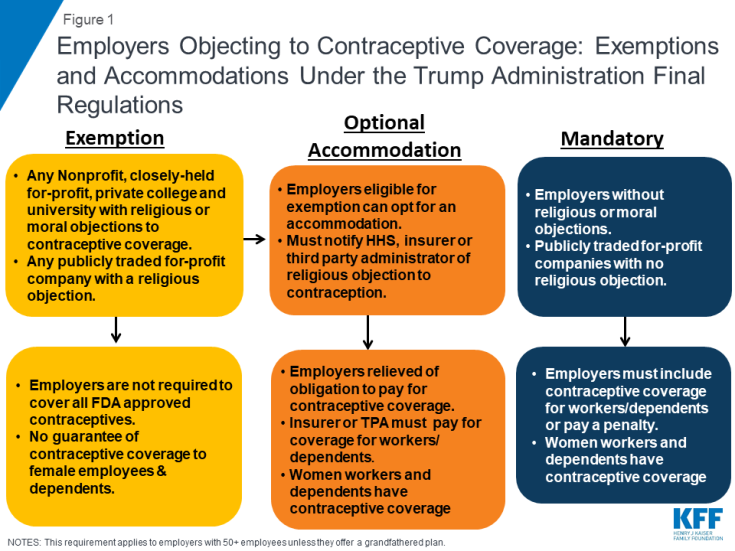 The accommodation will be available to any employer now eligible for the exemption as well as employers that previously qualified for the accommodation. The federal agencies issuing the regulations posit that these new rules will have limited impact on the number of women losing contraceptive coverage. However, how many employers who were not eligible for either the exemption or accommodation under the old regulations will now seek an exemption is unknown, as is the number of employers previously utilizing the accommodation who will now opt for an exemption (resulting in the loss of contraceptive coverage for their employees and dependents). HHS estimates that the cost of losing contraception is $584 per woman per year.

The Trump Administration has stated that they do not believe it is feasible to resolve the religious objection of employers while still ensuring that the affected women receive full and equal health coverage that includes contraceptive coverage. Instead, the Administration suggests women could receive contraceptive services through Title X clinics or other governmental programs.

While many women who would lose contraceptive coverage because of employers’ religious and moral objections would not qualify for services under the current Title X regulations, on June 1, 2018, the Trump Administration issued Proposed Regulations for the Title X federal family program that would broaden the definition of the group of individuals who qualify for assistance under the program. The proposed regulation would broaden the definition of “low-income” (currently defined as income below 100% of the federal poverty level) to also include women who receive employer-sponsored insurance offered by an employer who does not cover contraceptives in their plan due to religious or moral objections. The revised definition of “low-income” would expand eligibility to this new group of women who do not meet the income guidelines but do not have contraceptive coverage to make them eligible receive services at Title X family planning clinics at no charge.

Contraceptive use among women is widespread, with over 99% of sexually-active women using at least one method at some point during their lifetime.4 Contraceptives make up an estimated 30-44% of out-of-pocket health care spending for women.5 Since the implementation of the ACA, out-of-pocket spending on oral contraceptive drugs has decreased dramatically (Figure 2).6 One study estimates that roughly $1.4 billion dollars per year in out-of-pocket savings on the pill resulted from the ACA’s contraceptive mandate.7 By 2013, most women had no out-of-pocket costs for their contraception, as median expenses for most contraceptive methods, including the IUD and the pill, dropped to zero.8 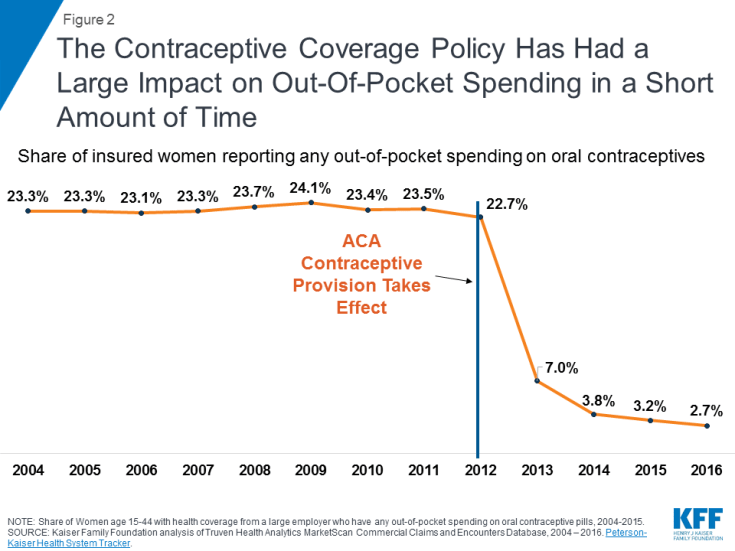 Figure 2: The Contraceptive Coverage Policy Has Had a Large Impact on Out-Of-Pocket Spending in a Short Amount of Time

This provision has also influenced the decisions women make in their choice of method. After implementation of the ACA contraceptive coverage requirement, women were more likely to choose any method of prescription contraceptive, with a shift towards more effective long-term methods.9 High upfront costs of long-acting methods, such as the IUD and implant, had been a barrier to women who might otherwise prefer these more effective methods. When faced with no cost-sharing, women choose these methods more often,10 with significant implications for the rate of unintended pregnancy and associated costs of childbirth.11

Finally, decreases in cost-sharing were associated with better adherence and more consistent use of the pill. This was especially true among users of generic pills. One study showed that even copayments as low as $6 were associated with higher levels of discontinuation and non-adherence,12 increasing the risk of unintended pregnancy.

The federal standards under Affordable Care Act created a minimum set of preventive benefits that applied to most health plans regulated by the federal government (self-funded plans, federal employee plans) and states (individual, small and large group plans), including contraceptive coverage for women with no cost-sharing. States have also historically regulated insurance, and many have had mandated minimum benefits for decades. State laws, however, have more limited reach in that they only apply to state regulated fully insured plans and do not have jurisdiction over self-funded plans, where 61% of covered workers are insured.13 In self-funded plans, the employer assumes the risk of providing covered services and usually contracts with a third party administrator (TPA) to manage the claims payment process. These plans are overseen by the Federal Department of Labor under the Employer Retirement Income Security Act (ERISA) and are only subject to federally established regulations.14 The ACA sets a minimum standard of coverage for preventive services for all plans. However, state laws regulating insurance, including contraceptive coverage, can require fully insured plans to provide coverage beyond the federal standards.

Ten states and DC have strengthened and expanded the federal contraceptive coverage requirement (CA, IL, ME, MD, MA, NV, NY, OR, VT, WA). Another 19 states have contraceptive equity laws that require plans to cover contraceptives if they also provide coverage for prescription drugs, but they do not necessarily require coverage of all FDA-approved contraceptives or ban cost-sharing (Figure 3). 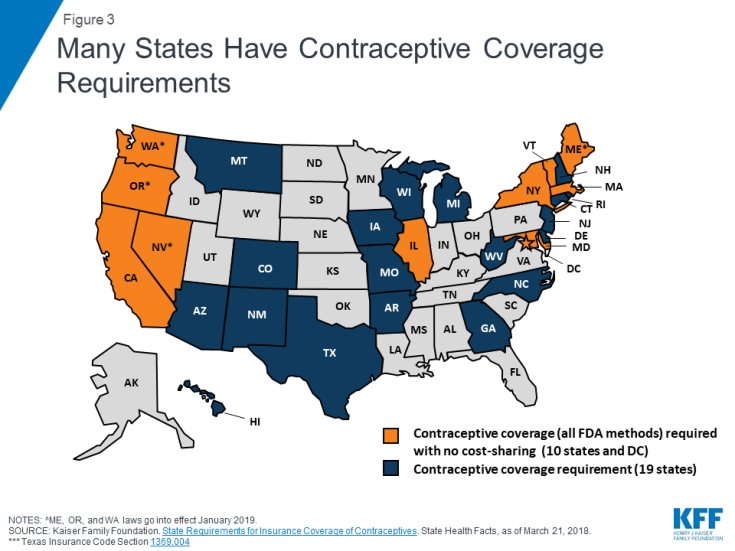 Many of the 29 states that have passed contraceptive coverage laws (both equity and no-cost coverage) have a provision for exemptions, but the laws vary from state to state and only apply to fully insured plans. This means that there may be a conflict between the state and federal requirements when it comes to religious exemptions. In some states with a contraceptive coverage requirement, some employers who are eligible for an exemption under federal law will not qualify for an exemption under state law (Table 2). Employers in those states will have to have to meet the standards established by their state even though they may qualify for an exemption based on the new federal regulations.

The Trump Administration’s new regulations substantially expand the exemption to nonprofit and for-profit employers, as well as to private colleges or universities with religious or moral objections to contraceptive coverage. It is unknown how many of these employers and colleges will maintain coverage through the accommodation as before and how many will now opt for the exemption leaving their students, employees and dependents without no-cost coverage for the full range of contraceptive methods. As a result of the new regulation, choices about coverage and cost-sharing will be made by employers and private colleges and universities that issue student plans. For many women, their employers will determine whether they have no-cost coverage to the full range of FDA approved methods. Their choice of contraceptive methods may again be limited by cost, placing some of the most effective yet costly methods out of financial reach.