Six in 10 Oppose ‘Cadillac Plan Tax’ on High-Cost Health Plans Set to Take Effect in 2018, But Cost Savings Argument Can Change Some Opinions

As the Centers for Medicare & Medicaid Services prepares to finalize a plan to pay physicians for discussing end-of-life treatment options with Medicare patients, the latest Kaiser Health Tracking Poll finds an overwhelming majority supports such coverage.

The poll finds 89 percent of the public says that doctors should discuss end of life care issues with their patients, though relatively few (17%) say that they have had such discussions with their doctor.  Senior citizens (27%) and those who report having a debilitating disability or chronic condition (31%) are somewhat more likely to say they have had such discussions. A third of the public (33%) also say they have participated in a conversation with a doctor about a relative’s wishes about their care at the end of life.

A large majority of the public (81%), including a similar share of seniors, say that Medicare should pay physicians to discuss such issues with their patients.  The Administration announced plans for such payments earlier this year and is expected to implement them with final regulations soon. A similar share (83%) supports private insurers paying for such discussions (83%).

The survey finds people are most willing to talk about end-of-life care with their spouse or partner: 83 percent say they would be very comfortable doing so.  Fewer say the same about doctors and other health care providers (57%), a share similar to those who would be very comfortable talking to other groups, including their children (55%); close friends (51%); their parents (51%); or a minister, priest or other religious or spiritual advisor (50%). 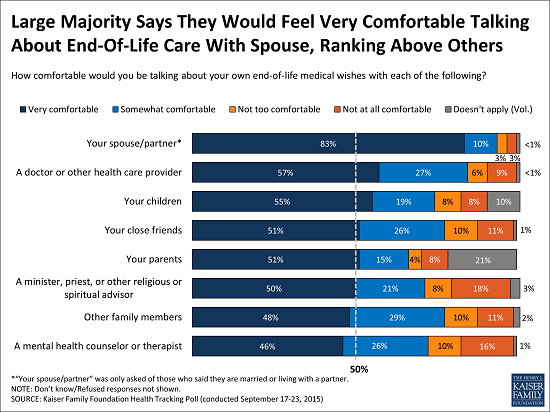 The poll also probes the public’s views on the so-called ‘Cadillac Plan Tax’ on high-cost health plans, which some in Congress across parties have proposed to eliminate. Not surprisingly given the U.S. public’s general wariness of taxes, a majority (60%) opposes the Cadillac tax, which would affect higher cost employer-sponsored health plans beginning in 2018. Republicans and independents are more likely to oppose the tax than Democrats, who may hold more favorable views of the tax due to its role in helping fund other parts of the Affordable Care Act, which Democrats widely favor.

The public’s views on the tax are somewhat fluid, and arguments for or against it can persuade some to shift their views, particularly when framed around the tax’s potential effect on health care costs.

When those who initially oppose the tax are told that it could help lower health care costs, 27 percent change their minds to say that they favor it, pushing overall support for the tax to 55 percent. Similarly, when those who initially favor the tax are told it would likely cause workers to pay more out of pocket for health care services, 15 percent switch to say they would oppose it, pushing overall opposition to the tax to 75 percent. 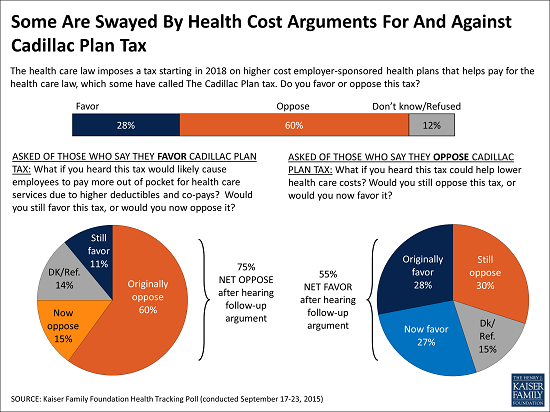 The poll was designed and analyzed by public opinion researchers at the Kaiser Family Foundation and was conducted from Sept. 17 to 23, 2015 among a nationally representative random digit dial telephone sample of 1,202 adults. Interviews were conducted in English and Spanish by landline (481) and cell phone (721). The margin of sampling error is plus or minus 3 percentage points for the full sample. For results based on subgroups, the margin of sampling error may be higher.