As the Affordable Care Act (ACA) marks its fifth anniversary, this month’s poll finds the gap between favorable and unfavorable opinions of the law has narrowed to the closest margin in over two years. A majority continue to say their family has not been personally impacted by the law, but for those who report an impact, roughly equal shares report being helped as report being hurt – also a closer margin than previously measured.

Although the Supreme Court heard oral arguments for the King v. Burwell case in early March, this month’s Kaiser Health Tracking Poll finds that the majority of the public continues to say they have heard only a little or nothing at all about the case. When presented with the hypothetical scenario that the Supreme Court rules in favor of the plaintiffs, many believe the decision would have a negative impact on the country as a whole, the uninsured, people receiving financial help from the government to buy insurance, and their own state. In response to such a decision, nearly two-thirds, including those in potentially impacted states, 1 say that Congress should pass a law so that people in all states can be eligible for health insurance subsidies – an opinion which holds true even when presented with arguments for or against Congressional action. In addition, 7 in 10 of those in the potentially affected states say states should act to create their own marketplace so that people could continue to access financial help.

The survey also includes a look at Americans’ experiences reporting their insurance status on their taxes for the first time, and finds that nearly half are unaware that the requirement to report health insurance status on their taxes takes effect this year. In addition, over 4 in 10 of the uninsured say they would remain without coverage even if they found out they had to pay a fine for not having coverage last year. 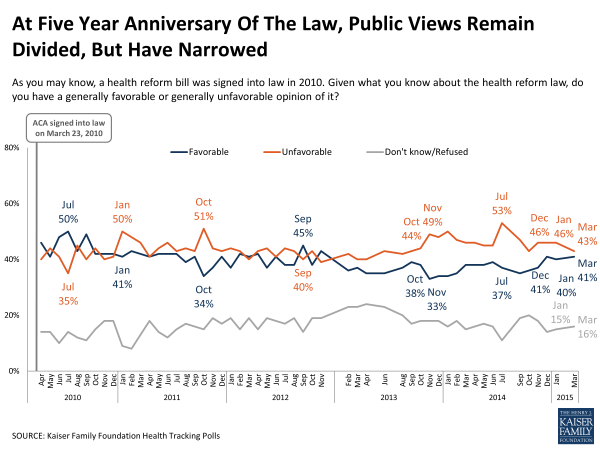 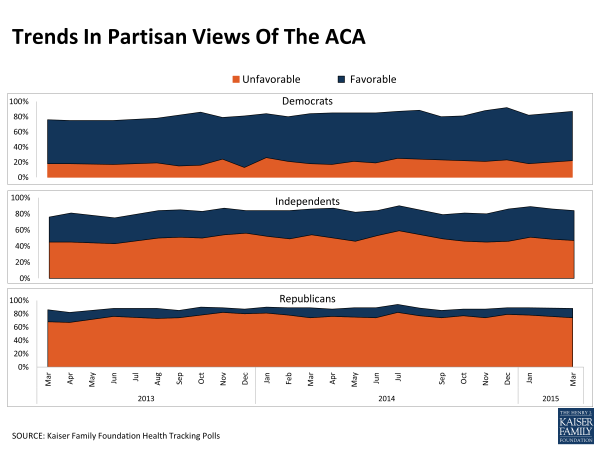 When those who view the law favorably are asked to say in their own words why they like the law, the most commonly mentioned reason is that it will expand access to health care and health insurance (61 percent), that it will make health care more affordable (10 percent), and that Americans and the country will be better off in general (7 percent). When those with an unfavorable view are asked the reasoning behind their opinion, the most common mention is financial considerations, including concerns that health insurance and health care costs are increasing and that the law costs too much (26 percent), opposition to the individual mandate (18 percent), and concerns about government overreach (10 percent). 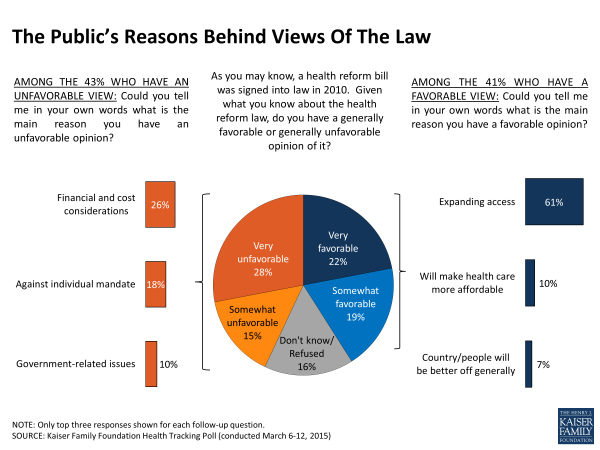 Personal Impact Of The Law

Consistent with previous Kaiser polls, the majority of the public (57 percent) says that the health care law has had no direct impact on their family. Although, this month, almost equal shares report that the law has helped them (19 percent) than report it has hurt them (22 percent). Republicans are more likely to say they have been hurt by the law (40 percent) than helped by it (8 percent), while Democrats are more likely to say the opposite, 27 percent who say they have been helped by the law compared to 8 percent say they’ve been hurt by it. 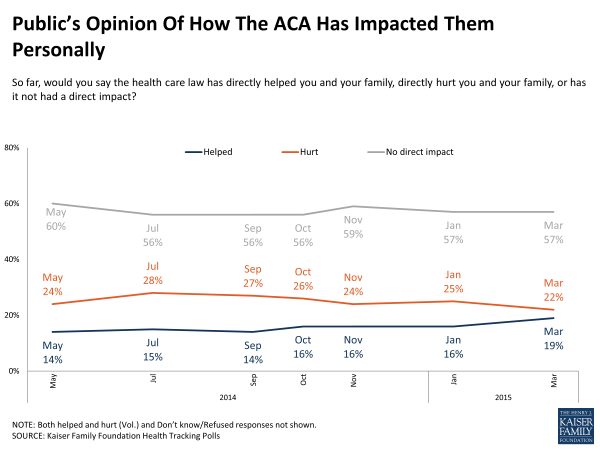 Those who report being helped by the law say that it allowed someone in their family to get or keep health coverage (9 percent), that it made it easier to get the health care they need (5 percent), or that it lowered their health care or insurance costs (4 percent).

The main reason named by those who report being hurt by the law is that it increased their health care or health insurance costs (14 percent). Smaller shares say that it made it more difficult to get the health care they need (4 percent) or caused someone in their family to lose their insurance (2 percent).

The first week of March, the Supreme Court heard oral arguments in the King v. Burwell case about whether the health care law says that financial assistance to low and moderate income people is available in states that chose to use the federal health insurance marketplace rather than develop their own state-run marketplace. Even after these hearings, the case is not on the public’s radar. Just over half (53 percent) say they have heard nothing about the case and 25 percent say they have heard only a little, while about 2 in 10 (22 percent) say they have heard at least something about the case, a share that is somewhat higher than the 14 percent who said the same in January. 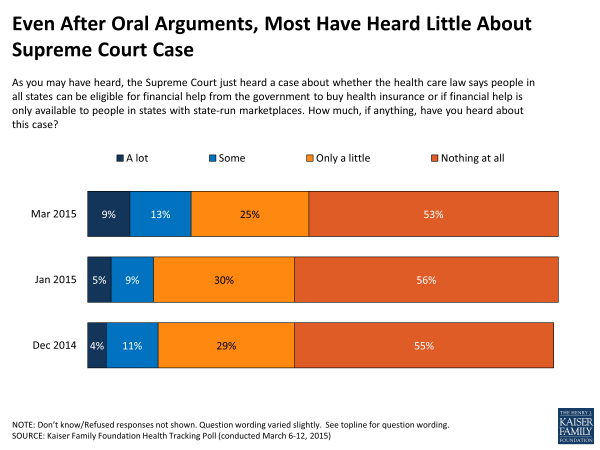 While most report not hearing much about the case, their impression is that if the Court sides with the challengers and limits subsidies to only those in states running their own marketplaces, the overall impact would be negative. A majority of the public, including majorities of Democrats, Republicans, and independents, says that if the Supreme Court rules in favor of the plaintiffs, the result would have a negative impact on the country (62 percent) and the uninsured (57 percent). In addition, across party lines, about half say the impact on people receiving financial help from the government to buy insurance would be negative. 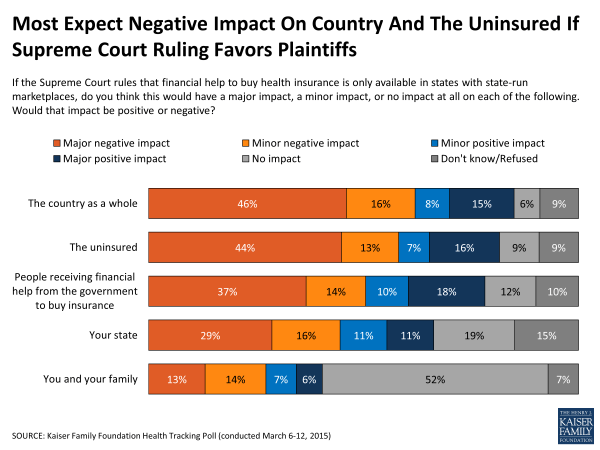 Just under half (45 percent) say a ruling in favor of the plaintiffs would have a negative impact on their state, including 46 percent of those in potentially affected states. Views among those in states using the federal marketplace are similar across parties with nearly half of Democrats (46 percent), Republicans (46 percent), and independents (47 percent) saying the impact would be negative. 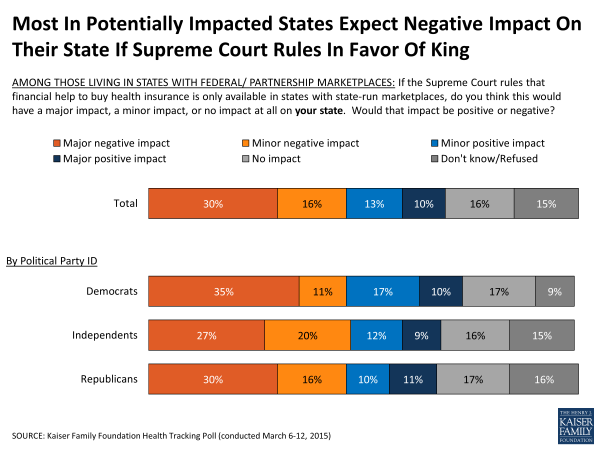 If the Supreme Court rules that financial help to buy health insurance is only available to low and moderate income people in states with state-run marketplaces, nearly two-thirds (65 percent) say that Congress should pass a law so that people in all states can be eligible for health insurance subsidies. Majorities of Democrats (81 percent) and independents (67 percent) favor Congressional action, while Republicans prefer Congress not act on the issue (56 percent, while 39 percent favor action). These findings are similar for those in potentially affected states. 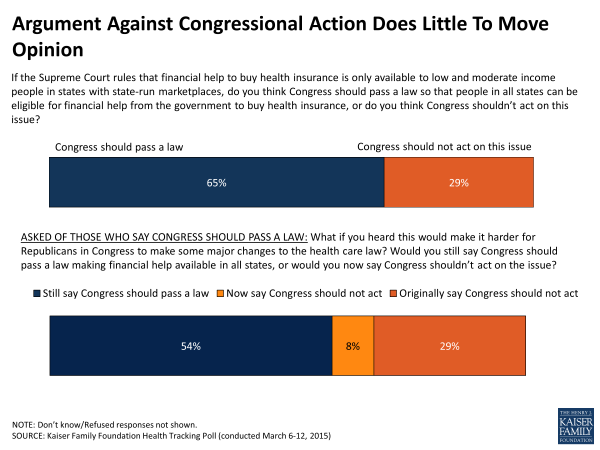 On the other side, when those who said they didn’t think Congress should act on the issue heard “that if financial help is only available in states with state-run marketplaces, more than 7 million people in states that don’t run their own marketplace would lose their financial help to pay for health insurance” 12 percent changed their view to say that Congress should act.

Similarly, after hearing “if financial help is only available in states with state-run marketplaces, the cost of health insurance premiums would go up substantially for everyone buying their own insurance in states that don’t run their own marketplace” an additional 11 percent now say Congress should act. 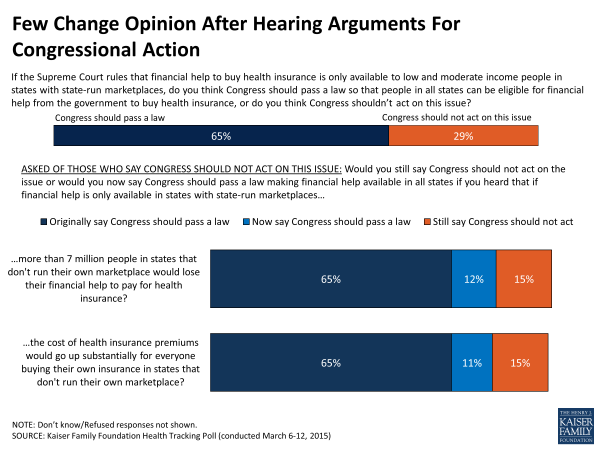 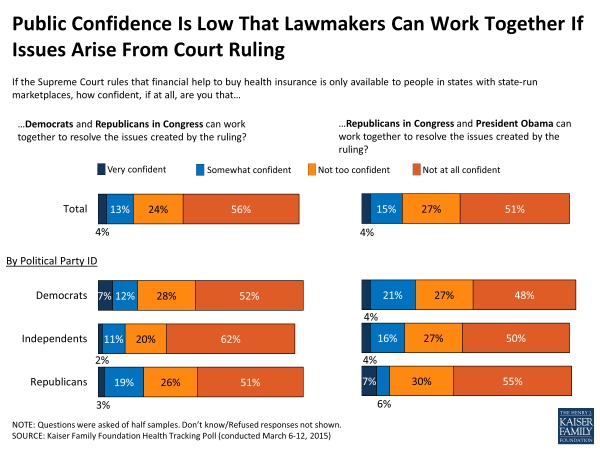 Those in states using the federal marketplace largely feel that if the Supreme Court ruling limits access to subsidies in states using the federal marketplace, states should act to create their own marketplaces so that people could continue to access financial help. Majorities of Democrats, Republicans and independents in the potentially affected states agree that states should act if needed, including about 6 in 10 Republicans (58 percent). 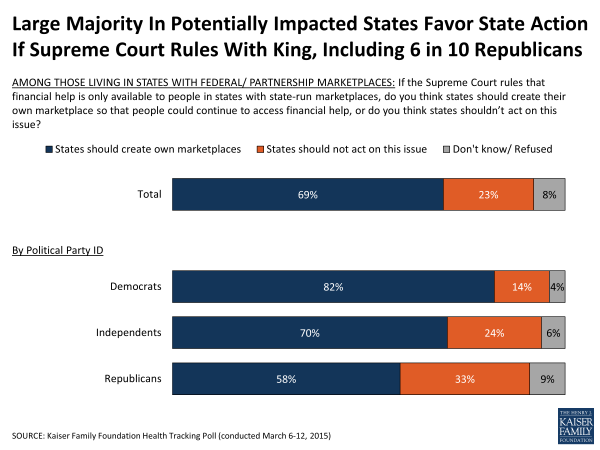 Tax Season and The ACA

This April marks the first tax season when Americans are required to report their health insurance status on their tax return. Over half of the public (53 percent) are aware that the requirement takes effect this year, for filing 2014 taxes, and a similar share (55 percent) know that when someone gets financial help from the government to pay their health insurance premium, it is possible that they would end up owing money to the government if their income or family size changes during the year. Three in 10 incorrectly say that the requirement does not take effect this year, either saying next year (20 percent), last year (11 percent) or some other year (1 percent), and 16 percent say they do not know. Nearly a quarter (23 percent) incorrectly say that it is not possible that someone would end up owing money if their income or family size change, and about 2 in 10 (22 percent) say they do not know. On these questions, the uninsured respond similarly to the public at large. For example, 57 percent of the uninsured are aware that this is the first year insurance status must be reported on taxes, and 28 percent of the uninsured say the reporting requirement starts a different year and 16 percent say they don’t know. 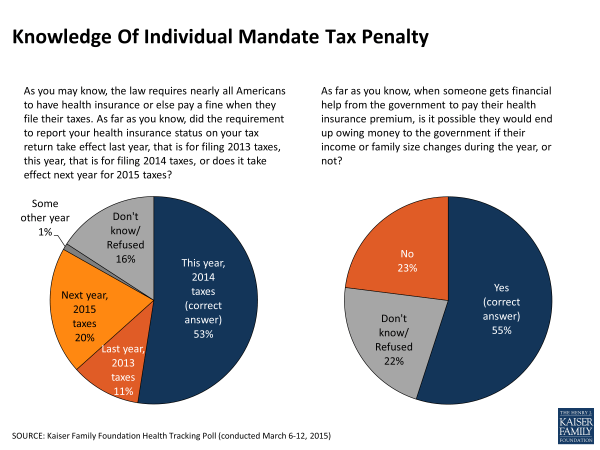 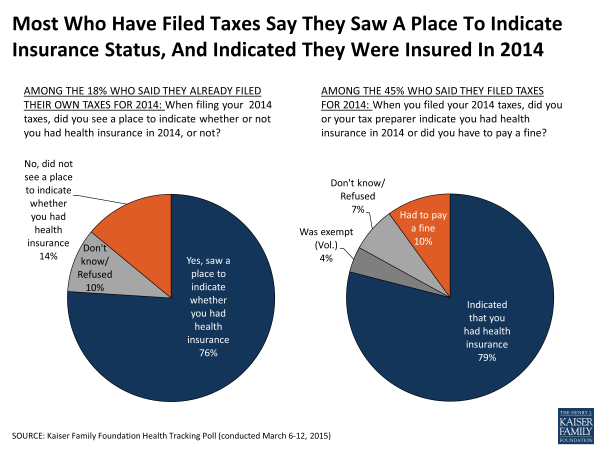 Leading up to this tax season the Department of Health and Human Services and some states running their own exchanges announced that they would reopen the marketplaces for the uninsured who find out they have to pay a fine while filing their 2014 taxes.  This special enrollment opportunity would allow them to purchase insurance for 2015 even though the normal open enrollment deadline has already passed and enable them to avoid paying the penalty next year. When asked their opinion on such a policy, nearly 6 in 10 (58 percent) say that uninsured people should be given a special opportunity to enroll in health insurance to avoid paying the fine again the following year, while 3 in 10 (29 percent) believe providing such a special opportunity is unfair to those who signed up for coverage when they were supposed to during the regular enrollment period.

Although overall opinions of the law are more closely divided than they have been in the last couple of years, the public’s thoughts on what Congress should do next remain unchanged. About a quarter want Congress to expand what the law does (23 percent) or move forward with implementing it as is (23 percent), while 1 in 10 (10 percent) want Congress to scale back what the law does and 3 in 10 (30 percent) want them to repeal the law entirely. The public’s views on what Congress should do with the health care law vary greatly by party. 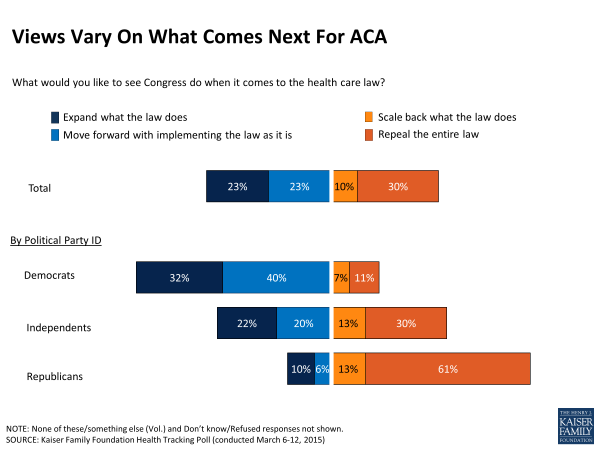 Five years after the ACA’s passage and over one full year since the implementation of most of the law’s major provisions, the public is largely aware of many key elements of the law, but significant gaps in knowledge remain. Eighty-one percent say they know about the individual mandate, the law’s requirement that nearly all Americans have health insurance or else pay a fine. Somewhat smaller, although still large shares are aware that the law creates health insurance exchanges or marketplaces (66 percent), that it provides subsidies to low and moderate income Americans who don’t get insurance through their jobs (65 percent), and that it gives states the option of expanding Medicaid (60 percent). Still, other than the individual mandate, about a third are unaware that these provisions are part of the health care law.

Compared to when the law was first a passed in the spring of 2010, similar shares are currently aware that states can expand Medicaid under the law or that it creates marketplaces where people can shop for insurance. Awareness of financial assistance available under the law is somewhat lower now than it was after passage (65 percent in March 2015, compared to 75 percent in April 2010). Knowledge of the individual mandate, on the other hand, has increased in the past five years from 71 percent in April 2010 to 81 percent in March 2015). 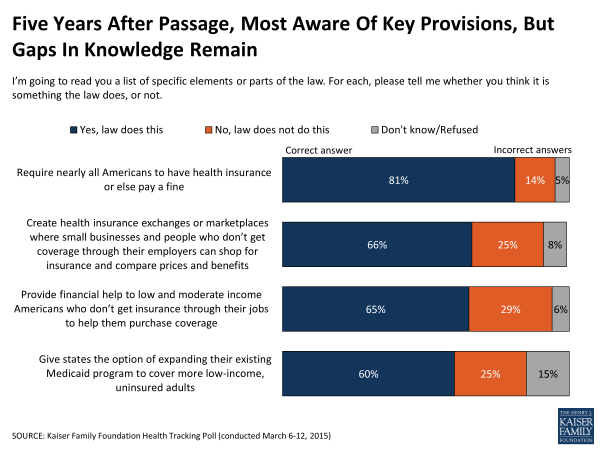 After the 2nd open enrollment period under the health care law comes to a close, nearly half of the uninsured (46 percent) say they don’t feel they have enough information to understand how the health care law will impact them or their family. About 6 in 10 of the uninsured (62 percent) say they have been without coverage for at least two years. Many uninsured (59 percent) expect to have to pay a fine for not having coverage in 2014. 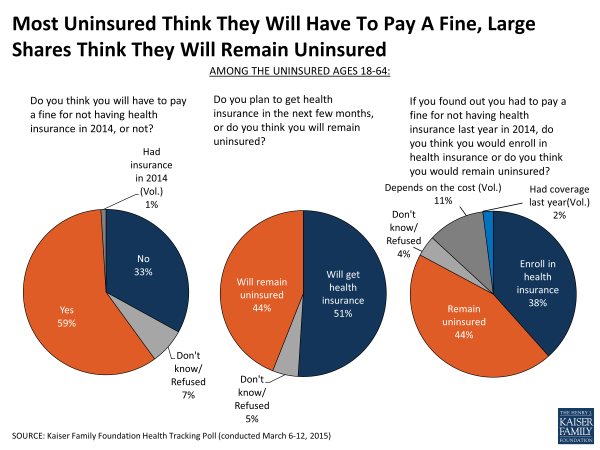