Pulling It Together: Critical Path To Health Reform: Stage One 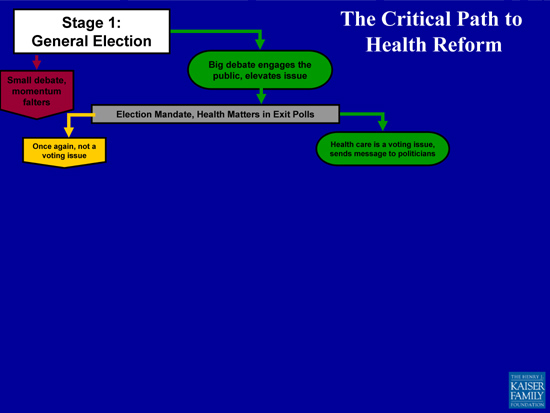 Will there be a big debate about health reform in the general election? If there is it will elevate the issue further, engage the public, and create momentum and a mandate for action by a new President and Congress. If, however, the debate about health is tepid or health is eclipsed by other issues such as the economy and Iraq, momentum could falter. One measure of the level of debate will be whether or not health registers in the exit polls as a factor in people’s voting decisions, a signal elected officials follow. Health did not register as a voting issue in 2004 or 2006. In the 1992 presidential election — leading up to our last big health reform debate — health care ranked third in the exit poll, behind the economy/jobs and the federal deficit. An equivalent result this time would be sufficient to keep the issue in play, and it seems entirely possible come November that health could end up as one of the top issues, particularly for some key voting groups. It could also emerge as a dimension of the public’s broader economic concerns, if pollsters ask the questions required to tease this out. But it’s also possible that the general election will focus more on the perceived leadership qualities of the two candidates than issues, and on other issues more than health. It is not at all certain that there will be a big, hot debate about health in the general election that will propel the issue forward.