Pulling It Together: Critical Path To Health Reform

In this new section of our Web site, I pull together ideas and data from across the Foundation’s work to try to paint a bigger picture that hopefully helps to illuminate critical health policy issues. This is not a blog or a personal position statement. This second installment of the new Pulling It Together series lays out the steps that could lead to the first major national health reform debate since the early nineties. Other topics coming soon include a look at the states and health reform, and the difference between Democratic, Republican, and Independent voters on health. 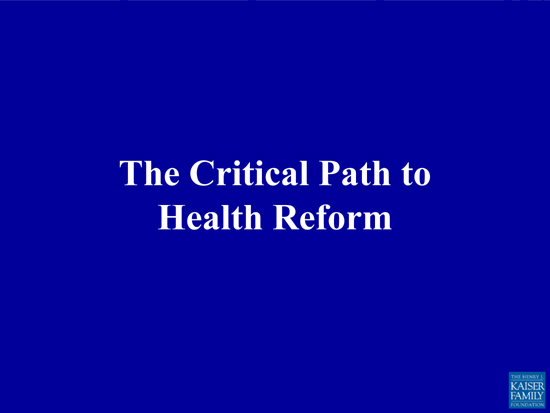 My aim here is to provide a simple visual aid — called “The Critical Path to Health Reform” — for thinking about how momentum can build or still be knocked off track as the country moves toward a potential debate about health reform legislation in the new Congress in 2009. The series of charts and accompanying text illustrate the three primary stages and “make or break” decision points that could mark the path to a major health reform initiative.