The U.S. Government and the World Health Organization

What is the World Health Organization (WHO)?

The WHO, founded in 1948, is a specialized agency of the United Nations (see Table 1). As outlined in its constitution, WHO has a broad mandate to “act as the directing and coordinating authority on international health work” within the United Nations system. It is made of 194 member states.

Its overarching mission is “attainment by all peoples of the highest possible level of health.”1 It supports its mission through activities such as:

The organization also serves as a convener and host for international meetings and discussions on health issues. While WHO is generally not a direct funder of health services and programs in countries, it does provide supplies and other support during emergencies and carries out programs funded by donors.

WHO’s overarching objective for its work during the 2019-2023 period has been “ensuring healthy lives and promoting well-being for all at all ages.” In pursuit of this objective, it has been focusing on three strategic priorities (the “triple-billion targets”):3

The agency has played a key role in a number of global health achievements, such as the Alma-Ata Declaration on primary health care (1978), the eradication of smallpox (formally recognized in 1980), the Framework Convention on Tobacco Control (adopted in 2003), and the 2005 revision of the International Health Regulations (IHR), an international agreement that outlines roles and responsibilities in preparing for and responding to international health emergencies.

WHO has a headquarters office located in Geneva, Switzerland, six semi-autonomous regional offices that oversee activities in each region, and a network of country offices and representatives around the world. It is led by a Director-General (“DG”), currently Dr. Tedros Adhanom Ghebreyesus, who was elected to a five-year term beginning July 2017 and has indicated that strengthening WHO as an organization, including addressing management and personnel matters, will be a major focus of his term.4

The World Health Assembly (WHA), comprised of representatives from WHO’s 194 member states, is the supreme decision-making body for the agency and is convened annually. It is responsible for selecting the DG, setting priorities, and approving WHO’s budget and activities. Every six years the WHA negotiates and approves a work plan for WHO (the most recent plan, known as the general programme of work, covers 2019-2023),5 and every two years it approves a biennial budget for the work plan (the current budget is for 2020-2021). The annual WHA meeting in May also serves as a key forum for nations to debate important health policy issues.

WHO’s Executive Board, comprised of 34 members technically qualified in the field of health, facilitates the implementation of the agency’s work plan and provides proposals and recommendations to the Director-General and the WHA.6 The 34 members are drawn from six regions:7

WHO relies on contributions from member states and private organizations for funding to implement its budget and work plan. The biennial WHO budget for 2020-2021 has been set at $4.84 billion. However, actual revenue and expenditures over that period may deviate from the budgeted amount, such as when additional expenditures occur in response to health emergencies.

WHO has two primary sources of revenue: 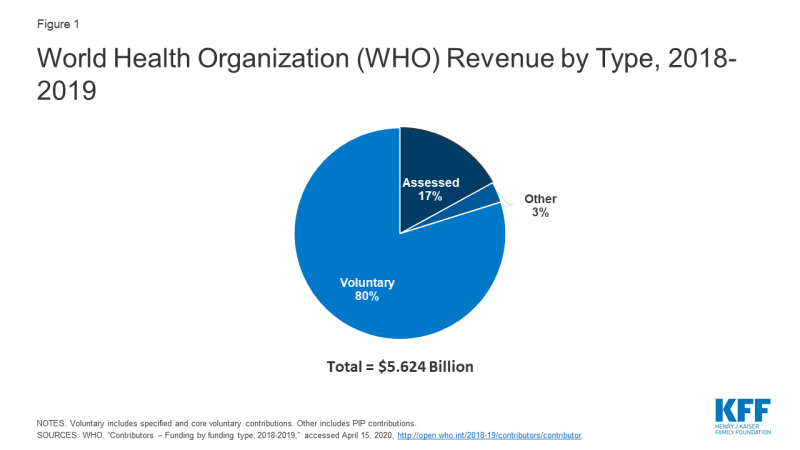 WHO’s activities, as identified in its programme budget for 2020-2021, are organized and funded around its three strategic priorities and a few other key programs, such as polio eradication (see Table 2).13

WHO faces a number of institutional challenges, including:15

These and other challenges were particularly evident after the perceived failures of the agency during the response to Ebola in West Africa in 2014-2015, and many called for significant reform of the agency as a result.16 The agency adopted a number of reforms after 2015 such as reorganizing its approach to outbreaks and health emergencies by creating a Health Emergencies Programme,17 and standing up new special emergency financing mechanisms such as the Contingency Fund for Emergencies.18 The reforms seem to have improved WHO capabilities since 2014, for example with an improved response to recent Ebola outbreaks in Democratic Republic of Congo.19 The organization faces an even greater challenge now, in coordinating a global response to COVID-19, declared to be a PHEIC on January 30, 2020, and a global pandemic on March 11, 2020.

U.S. Engagement with WHO

The U.S. government has long engaged with WHO in many ways including through financial support, participation in governance, and other activities (see below). During the course of the COVID-19 pandemic, however, U.S. engagement was minimal under the Trump administration as it moved to distance the U.S. from WHO: 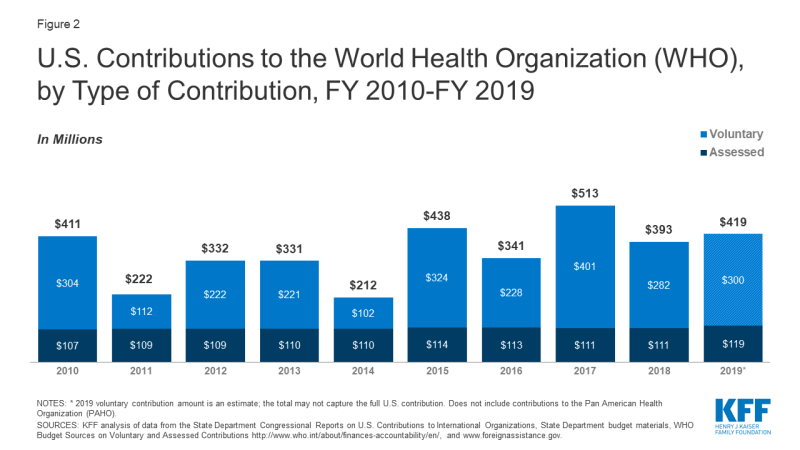 WHO reports that U.S. assessed and voluntary contributions together represented approximately 16% of WHO’s total revenue in the 2018-2019 biennium25 and approximately 20% of WHO’s programme budget in 2018-2019.26

The U.S. participates in WHO governance, including as a current Executive Board member. The U.S. has historically been an active and engaged member of the World Health Assembly, sending a large delegation usually led by a representative from the Department of Health and Human Services with multiple other U.S. agencies and departments also participating.

The U.S. provides technical support to WHO through a variety of activities and partnerships. This includes U.S. government experts and resources supporting WHO research and reference laboratory work, and participation of U.S. experts on advisory panels and advisory groups convened by WHO. In addition, a number of U.S. government representatives have at times been seconded or have served as liaisons at WHO headquarters and WHO regional offices, working day-to-day with staff on technical efforts.27 While the Trump administration said it would scale down its engagement with WHO and recall some detailees, and determine participation in WHO technical and other meetings on a case by case basis, the Biden administration has indicated the U.S. will resume regular engagement with WHO and cease the drawdown of seconded U.S. staff.28

The U.S. has also worked in partnership with WHO before and during responses to outbreaks and other international health emergencies. For example, U.S. government experts have often participated in international teams that WHO organizes to investigate and respond to outbreaks around the world. For example, the U.S. worked with WHO and the broader multilateral response to the Ebola epidemic in West Africa that began in 2014, and U.S. scientists were part of the WHO delegation that visited China in February 2020 to examine its response to COVID-19.29

While the U.S. government had long supported WHO and been its largest donor, the Trump administration reversed course, criticizing the organization, withdrawing financial support, and starting the process to end U.S. membership. The Biden administration has restored U.S. engagement with WHO and affirmed continued U.S. membership but will be faced with challenges in working to strengthen WHO. These will include questions about how best to improve the organization’s effectiveness, particularly regarding its role in preparing for and responding to pandemics, whether the organization should have more authority over country responses during emergencies, the scope of the WHO mission, and the balance between U.S. support for WHO’s core functions and more specialized programming.