This was published as a Wall Street Journal Think Tank column on December 13, 2015. 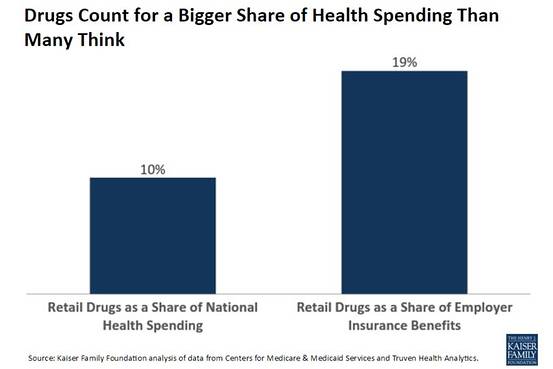 Kaiser Family Foundation analysis of data from the Centers for Medicare and Medicaid Services and Truven Health Analytics showing that drugs account for 10% of U.S. health spending but 19% of employer insurance benefits.

The cost of prescription drugs is the hot health-care issue, but almost every discussion about it includes this caveat: As big a problem as rising drug prices have been for consumers and payers, drug spending represents only 10% of national spending on health. Yet, as the chart above shows, drug spending represents almost double that share of health spending (19%) in employer health insurance plans. That is not too much less than the 23% employers spend on inpatient hospital care.

Why the disparity? First, the $3 trillion in national health spending is a broad catchall that includes hospital care, physician services, drugs, research, administrative costs, public health activities, and long-term care. Second, some of the people served by Medicare and Medicaid, whose spending is counted in the national totals, require lots of services not typically used by those covered by employer health insurance plans.

High drug prices have been in the news because of costly drugs to treat Hepatitis C, among other illnesses, and because elected officials and political candidates have been talking about drug costs. Rising drug prices, expanded coverage of the uninsured under the Affordable Care Act, and an improving economy have also contributed to an uptick in the rate of increase in health spending. But depending on what you count and how you count, drug spending may be an even larger problem than many thought. It clearly is for employers, who foot a large share of the nation’s health-care bills.