This was published as a Wall Street Journal Think Tank column on May 21, 2015. 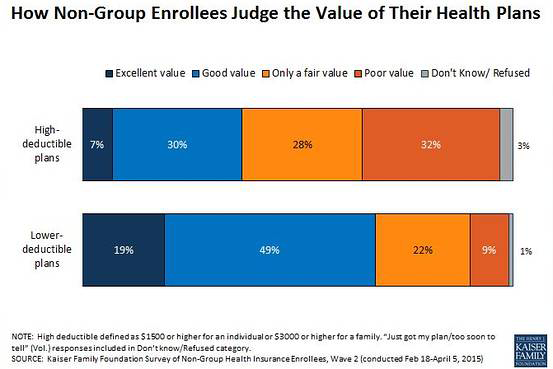 A Kaiser Family Foundation survey published Thursday of people who buy insurance in the non-group market found that while many people may choose higher-deductible plans so they can pay a lower premium, they aren’t all that happy about it. It may just be the only way they can get a premium they feel they can afford.

Insurers and employers may feel that they have no recourse but to keep raising deductibles to constrain premium increases. Many people will feel a high-deductible plan is their best option, either because they presume they won’t need care or because they can’t afford a plan with a higher premium. But the survey found that choosing a plan with a very high deductible can feel like a Faustian bargain if deductibles bite when people do need care. Deductibles, like all forms of cost-sharing, help keep health-care use and costs down, but finding the right balance between appropriate and excessive cost-sharing has become a major challenge for employers, insurers, the government, and consumers.