This was published as a Wall Street Journal Think Tank column on December 28, 2015. 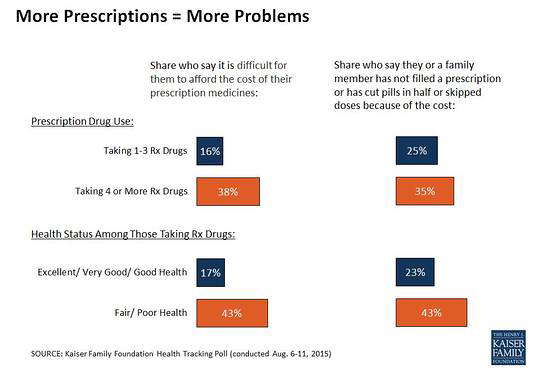 The more drugs people take and the sicker they are, the more likely they are to experience problems paying for prescription medicines–or to forgo them altogether because of cost. It may not be surprising that people who use more drugs have the greatest problems paying for them. It’s also never a good thing when people with the greatest need struggle the most to pay for health care.

The pattern holds for seniors on Medicare as well. Twenty percent of seniors taking prescription medicine report difficulty paying for their drugs. Among seniors taking four or more medications, the share rises to 29%. A relatively small number of people on Medicare also take high-priced specialty-tier drugs that have been in the news. Even when a specialty medication is covered by a Medicare drug plan, patients can pay thousands of dollars out of pocket for just one drug unless they get cost assistance from government or a drug company.

While insurance companies and drug companies tussle over the high cost of drugs and policy makers debate potential actions, the fact that people with the greatest needs bear the brunt of high drug prices adds urgency to the problem.