This was published as a Wall Street Journal Think Tank column on November 24, 2014. 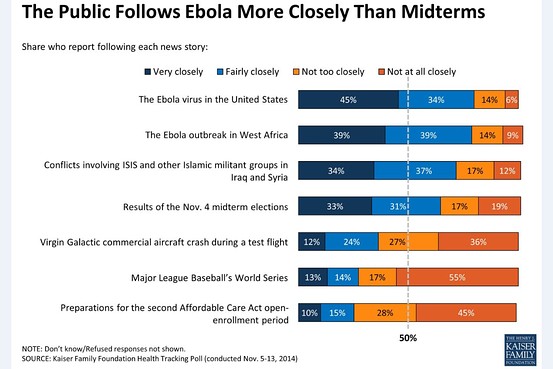 If you have any doubts on how concerned Americans became about the small number of Ebola cases in the U.S., check out this chart. When the Kaiser Family Foundation surveyed the public for our Kaiser Health News Index, we found that the public followed Ebola in the U.S. more closely than any other story over the past month–and much more closely than the midterm elections. Forty-five percent of Americans told us that they followed news reports about Ebola in the U.S. “very closely.” A separate 34% said they did so “fairly closely.” But only 33% of respondents said they followed the results of the midterm elections very closely and 31% fairly closely.

Public attention may have been driven by fear that Ebola would spread in the U.S., the Ebola media frenzy, the gripping human-interest stories, or a combination of all these. Ebola in West Africa was the second most closely followed story, suggesting that Ebola was truly on the public’s radar screen.

f course, it’s possible that the general public was somewhat disinterested in

he midterm elections, which allowed other news stories to rise to the top of the index in November. That would be consistent with the traditional dynamics of midterms, in which smaller slices of the electorate vote, and the conventional wisdom that the public is turned off by both parties and the political system.

So what does it say that Americans followed a public health threat here more closely than our national elections? We didn’t ask which story they thought was more important to the future of the nation. But it’s possible that would have elicited a different answer.