The FY15 Omnibus Appropriations bill,1 which was signed into law by the President on December 16, 2014, includes $5.4 billion in emergency funding to address the Ebola crisis, of which $3.7 billion is specifically designated for international efforts (Table 1 and Figure 1). It also provides approximately $9.2 billion in specified funding for ongoing U.S. global health programs. The Ebola funding was provided by Congress in response to an emergency request made by the President in November and represents a significant increase in total U.S. support for global health, although as an emergency funding measure, it does not count toward existing budget caps on discretionary spending. 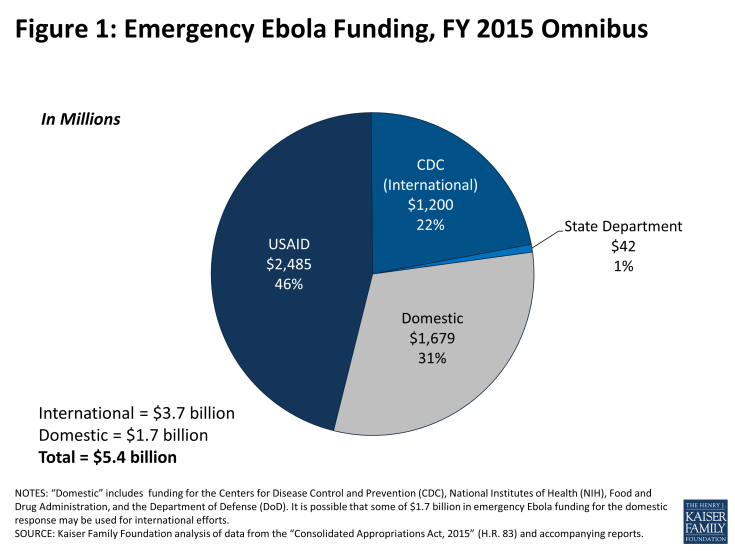 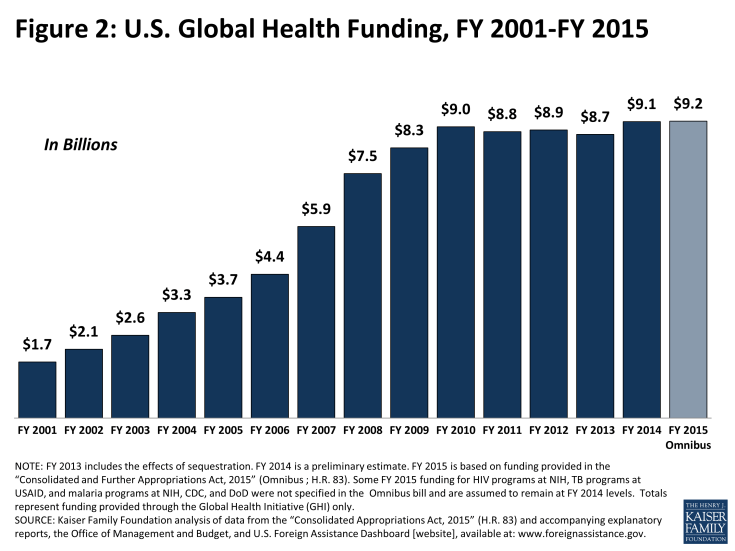 Most of the global health budget ($8.2 billion) specified in the FY15 Omnibus is provided through the Global Health Programs (GHP) account at the U.S. Agency for International Development (USAID) and at the State Department (Table 3). Within the GHP account, most programs remained at or near FY14 levels, with the exception of bilateral funding for HIV, which increased by $300 million, and support for the Global Fund to Fight AIDS, Tuberculosis and Malaria (Global Fund), which decreased by the same amount (see Figure 2). Funding for malaria and maternal and child health (MCH) each increased slightly (by approximately 1%). 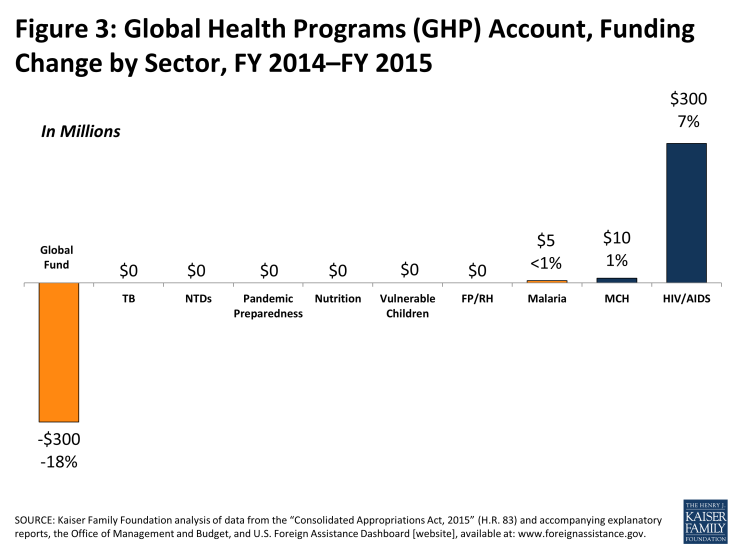 The summary below provides an overview of the emergency Ebola funding as well as funding for ongoing global health programs as specified in the FY15 Omnibus bill (unless otherwise stated, all comparisons are to enacted FY14 levels).

In addition to the $9.2 billion in known funding for ongoing global health programs, Congress provided $5.4 billion in emergency funding for Ebola (see Table 1) in the FY15 Omnibus.4 Of the $5.4 billion, approximately $3.7 billion is designated for international efforts “to prevent, prepare for, and respond to the Ebola virus disease outbreak,” with the majority ($2.5 billion) provided to USAID, followed by the Centers for Disease Control and Prevention (CDC) ($1.2 billion, of which $597 million is designated to support national public health institutes and global health security) and the State Department ($42 million).5

Of the $1.7 billion in domestic funding, the largest share ($733 million) is provided to the Assistant Secretary for Preparedness and Response at the Department of Health and Human Services (HHS), followed by the CDC ($571 million), National Institutes of Health (NIH) ($238 million), Department of Defense (DoD) ($112 million), and the Food and Drug Administration (FDA) ($25 million). This funding supports, among other things, research and development activities at HHS and DOD, as well as a range of activities at the CDC including the establishment of regional treatment centers, medical worker training, and support for quarantine efforts. It is possible that some of the $1.7 billion in domestic funding may be used for international efforts.

Since Congress designated this funding for emergency purposes, it is not counted towards overall budget caps. Additionally, Congress stipulated in the FY15 Omnibus that this funding could be provided over a multi-year period. For instance, Congress specified that the emergency Ebola funding provided to the CDC ($1.8 billion, of which $1.2 billion is for international efforts) would remain available through FY19, while the majority of the $2.5 billion provided to USAID would “remain available until expended.”6

PEPFAR’s bilateral HIV funding through the GHP account totaled $4,650 million ($330 million at USAID and $4,020 million at the State Department), an increase of $300 million (7%) above FY14. Bilateral HIV accounts for the largest share (55%) of any program area within the global health portfolio under the GHP account (See Figure 3). Included within this amount is funding for microbicides research ($45 million) and the U.S. contribution to the Joint United Nations Programme on HIV/AIDS (UNAIDS) ($45 million). The Omnibus bill also provided $128.4 million in HIV funding through the CDC and $8 million for HIV programs at the Department of Defense (DoD); both totals match FY14 levels. Additional funding for HIV research at the National Institutes of Health (NIH) is not yet known (in FY14, it was $376 million). 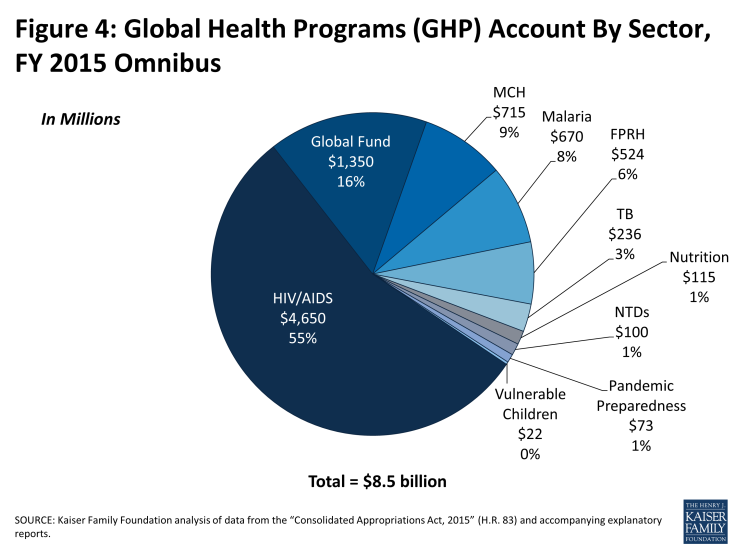 The Omnibus bill included $1,350 million for the U.S. contribution to the Global Fund, a $300 million (18%) decrease from FY14 levels, but an amount that matches the President’s FY15 Budget Request. This fulfills the President’s pledge, made during the Global Fund’s 4th Replenishment Conference held in December 2013, that the U.S. would contribute $1 for every $2 pledged by other donors, and is in line with the Congressionally mandated caps on the amount of funding the U.S. can provide to the Global Fund.7 In the FY15 budget request, the President had included an additional $300 million in potential funding that could be made available to the Global Fund, dependent on additional pledges from other donors, although this was ultimately not included in the final bill.8 The Global Fund accounts for the second largest share (16%) of U.S. funding for global health (in the GHP account).

Funding for tuberculosis (TB) programs through the GHP account totaled $236 million, which matches the FY14 level. Additional tuberculosis funding provided through the Economic Support Fund (ESF) account is not yet known (in FY14, it was $6.5 million).

Malaria funding totaled $669.5 million and was one of only three program areas under the GHP account that increased above FY14 levels ($4.5 million or 1%). Additional malaria funding through the CDC and DoD and for research activities at the NIH is not yet known (in FY14, CDC funding was $11 million, DoD was $17 million, and NIH research funding was $151 million).

Congress stated in the Omnibus bill that total bilateral funding for FP/RH programs should be “not less than $575 million” ($524 million through the GHP account and $51 million through the ESF account) and included an additional $35 million for the U.S. contribution to the United Nations Population Fund (UNFPA), matching the FY14 enacted funding levels ($610 million).9,10 While the Omnibus bill maintains existing policy requirements prohibiting the use of foreign assistance to pay for the performance of abortion as a method of family planning or to motivate or coerce any person to practice abortion, it does not include a reinstatement of the “Global Gag Rule,” which required foreign non-governmental organizations (NGOs) to certify that they would not perform or promote abortion as a method of family planning using funds from any source as a condition for receiving U.S. funding, nor does it prohibit funding for needle exchange programs – provisions that had been included in the House State and Foreign Operations (SFOPs) appropriations bill. The Omnibus bill also reversed a ban on funding for abortion services for Peace Corps volunteers in cases of life, rape, or incest.

The majority of funding for MCH programs is provided through the GHP account, which totaled $715 million in the FY15 Omnibus, a $10 million (1%) increase above FY14 levels. This includes $515 million in funding for bilateral programs, of which $51.5 million is for Polio, and a $200 million contribution to GAVI. Despite the overall increase in MCH funding through the GHP account, after taking into account increased funding for GAVI (see below), funding for bilateral MCH activities actually declined by $15 million from FY14 levels. Some additional MCH funding provided through other accounts at USAID, such as the ESF and Food for Peace (FFP) accounts, is not yet known.

Funding for vulnerable children, which is provided via the Displaced Children and Orphans Fund (DCOF), totaled $14.5 million in the GHP account matching the FY14 level.

Pandemic Preparedness funding through the GHP account totaled $72.5 million, which matches the FY14 level. Additional funding provided through other accounts, such as the ESF account, is not yet known.

The FY15 Omnibus included $45.4 million for Global Disease Detection and Emergency Response and $9.8 million for Global Public Health Capacity Development at the CDC. In the FY15 budget request, these two areas were included under a broader funding category titled Global Public Health Protection along with funding for a newly launched Global Health Security Initiative.12  While Congress did not provide specific funding for the Global Health Security Initiative, a significant portion of the emergency Ebola funding included in the FY15 Omnibus bill is directed to the CDC for similar activities (see Emergency Ebola Funding section below).

The U.S. provides additional global health funding in support of water, sanitation and hygiene (WASH) activities, for international global health research efforts conducted through the Fogarty International Center (FIC) at NIH, and for multilateral organizations, such as  the World Health Organization (WHO) and the Pan American Health Organization (PAHO), that play an important role in addressing global issues. Congress provided $382.5 million for WASH projects, a $17.5 million (5%) increase above the FY14 enacted funding level.13 It is important to note that WASH is considered a cross-cutting issue supported through direct appropriations as well as funding provided through other programs areas (e.g. HIV, MCH, etc.); the $382.5 million in WASH funding provided through the FY15 Omnibus includes both direct appropriations as well as funding from other program areas and, therefore, is not included within the overall global health total.14 The FY15 Omnibus bill included $67.8 million for international global health research activities at FIC ($0.3 million or 0.4% above FY14). U.S. contributions to WHO and PAHO are not yet known.

The Omnibus bill provided funding for areas and agencies that are not directly involved in U.S. global health, but are related and may impact these efforts including: the Millennium Challenge Corporation (MCC); Feed the Future (FtF), which is the U.S. Government’s Global Hunger and Food Security Initiative; broader food assistance through Food for Peace (FFP) and McGovern-Dole International Food for Education and Child Nutrition (McGovern-Dole); and other funding through the State & Foreign Operations Development Assistance (DA) and Economic Support Fund (ESF) accounts. Among these areas and agencies, FtF was the only item that declined ($99 million or 9%) in the Omnibus bill; funding for MCC and McGovern-Dole increased slightly, and funding for the DA account and FFP remained flat (see Table 4). While funding for the ESF account increased ($158 million or 3%) in the FY15 Omnibus, this entire increase can be attributed to increased funding for Overseas Contingency Operations (OCO), which provides funding for programs in Iraq, Afghanistan, and Pakistan; non-OCO funding in the ESF account actually declined.