Health Care and the 2004 Elections: HIV/AIDS

Download a printable .pdf of Health Care and the 2004 Elections: HIV/AIDS.

HIV/AIDS is a critical issue to many who may have questions for candidates concerning their positions on the U.S. response to the epidemic at home and abroad. The U.S. is faced with numerous challenges in addressing the epidemic, including: funding levels for global and domestic HIV/AIDS efforts; differing approaches to prevention, care, treatment, and research; and questions about the role of the U.S. as a leader in the global fight against the epidemic.

In the more than two decades since the beginning of the HIV/AIDS epidemic, over 60 million people worldwide have become infected, including more than 20 million who have already died. 1 The number of people living with HIV/AIDS has grown significantly over time, with an estimated 37.8 million living with HIV/AIDS today (see Figure). Women now comprise almost half of adults living with HIV/AIDS and young people continue to bear the brunt of the epidemic, especially young women. Sub-Saharan Africa has been particularly affected, accounting for two-thirds of all people living with HIV/AIDS. 1 There are also growing concerns about “next wave” countries, those on the verge of major epidemics, particularly Russia, India, and China. Complicating the response worldwide is that most people with HIV/AIDS do not know they are infected. In addition, only eight percent of those in need of antiretroviral therapy are estimated to have access 2 and fewer than one in five are reached by prevention programs. 1 Finally, global funding for HIV/AIDS from governments and other donors falls far short of projected need. 1 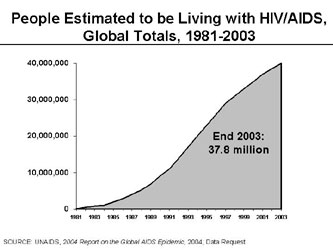 Almost one million people are estimated to be living with HIV/AIDS in the U.S. A significant proportion is not receiving regular HIV care, including medications for HIV, and an estimated one in four people with HIV do not know they are infected.3 Minority communities, young people, women, and men who have sex with men have been particularly hard hit. African Americans, for example, represent a growing proportion of new HIV infections and AIDS diagnoses, accounting for half of AIDS cases diagnosed in 2002. Women also represent an increasing proportion of AIDS diagnoses, accounting for about one quarter of new diagnoses in 2002 (see Figure). The number of new HIV infections each year – about 40,000 – has remained constant for more than a decade, but there are troubling signs that the incidence of HIV may be on the rise. 4,5 In addition, many of the critical programs that provide care, treatment, support, and prevention to people at risk for and living with HIV in the U.S. are facing resource constraints and, because of funding shortages, there are waiting lists for AIDS medications in several states. 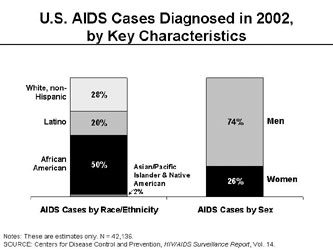 Among the major policy challenges facing U.S. policymakers in addressing the epidemic are:

U.S. Global HIV/AIDS Leadership. In 2003, the Administration announced the President's Emergency Plan for AIDS Relief (PEPFAR), a new 5-year, $15 billion global HIV/AIDS initiative later enacted into law, which includes almost $10 billion in new funding. The bulk of the new funds ($9 billion) is targeted to 15 hard hit “priority” countries; up to $1 billion would be contributed to the Global Fund to Fight AIDS, Tuberculosis, and Malaria (Global Fund), an international partnership of governments and private organizations created to help finance the response to HIV/AIDS, TB, and malaria. The remaining $5 billion will go to continuing U.S. efforts in other countries.6

Global AIDS legislation and Administration policy include requirements for where and how the money gets spent, including targeting a subset of countries, limiting Global Fund contributions, and allocating specific funding percentages to prevention, including abstinence-only prevention, care, and treatment. Many have called for increased funding for global AIDS, and some policymakers support doubling U.S. assistance to $30 billion over five years and allocating a greater share to the Global Fund. Much of this discussion has centered on what should be the U.S. government’s “fair share” in the fight against the global epidemic. There have also been calls to expand beyond the 15 PEPFAR priority countries to include large, next wave countries, where more resources now could help prevent millions of infections. Other concerns have been raised about the need to get money to the front lines as quickly as possible and the importance of coordinating with other governments and donors and those in affected countries themselves.

Affordable Access to Treatment and Role of Generic Drugs. The high cost and complexity of combination antiretroviral therapy is an obstacle to HIV/AIDS treatment, particularly in poor countries but also within the U.S. Fixed-dose combination and co-packaged antiretroviral drugs, including those with generics, are seen as one way to expand access to treatment in highly affected countries because they are often more affordable and are easier for patients because they require fewer pills. The Administration has decided to allow PEPFAR funds to be used to purchase such medications for international use, but only if these drugs receive approval from the U.S. Food and Drug Administration (FDA) through an expedited process , stating that this is the only way to ensure that they are safe and effective. Critics of this approach argue that an existing World Health Organization (WHO) pre-qualification process is sufficient to ensure drug safety and quality, and is already used by other countries.

Immigration and Travel Ban. Longstanding U.S. policy prohibits people with HIV from immigrating to the U.S., as well as traveling to the U.S. (with limited exceptions). Some want the ban to be lifted, arguing that this policy is not based on public health principles but is instead a form of discrimination.

Care, Treatment, and Waiting Lists for Medications. Even in the U.S., not everyone with HIV/AIDS who needs medications can get them, and access to care and treatment varies significantly across the country – what you get depends on where you live. The Ryan White CARE Act, the nation’s largest program designed for people with HIV/AIDS, faces funding constraints in many parts of the country. The AIDS Drug Assistance Program (ADAP) of the Ryan White CARE Act in particular, which funds states to provide HIV medications to those who cannot get them elsewhere, faces continual funding shortages resulting in waiting lists for medications – as of August 2004, 9 state ADAPs had waiting lists, totaling more than 1,500 people. 7 ADAP funding constraints also lead to significant disparities in access to different HIV medications across states. 8 Medicaid and Medicare also play a critical role for people with HIV/AIDS, providing insurance coverage to about half of those receiving care.9 As people live longer with HIV/AIDS these programs will become even more important, raising important issues concerning the rising cost of prescription drugs, current eligibility rules for these programs, and state and federal funding constraints.10,11

Preventing New Infections. Because HIV incidence in the U.S. has remained steady for so long, current policy and program debates center on how to expand access to HIV testing, the role of community-based organizations vs. government in designing HIV prevention interventions, and how to balance prevention efforts between those who are at risk and those who are already HIV-positive. In both global and domestic HIV/AIDS debates, there are differing opinions about approaches to HIV prevention. The Administration, while endorsing an “ABC” approach (“Abstinence, Be faithful and when appropriate, use Condoms”), emphasizes abstinence as the only sure way to prevent sexual transmission of HIV and other sexually transmitted diseases. Others say that a comprehensive approach, one that includes but does not prioritize abstinence over condoms, is needed. U.S. global AIDS legislation requires a certain amount of funding to go to abstinence-only programs. For the U.S., President Bush has called for doubling funding for abstinence-only programs, which affects HIV prevention activities.

Minorities and Other Hard-Hit Populations. Specific challenges face policymakers in addressing the epidemic’s growing impact on minority populations, including how best to support existing efforts focused on minorities, such as the Minority AIDS Initiative 12 , as well as strengthen other programs that also serve minorities at risk for and living with HIV, and whether new approaches are also needed. There are also challenges about how best to address the U.S. epidemic’s impact on women and other vulnerable groups.

The following questions are intended to help evaluate candidate positions on HIV/AIDS: