Death Toll of the Pandemic Places the U.S. at Top of Most Affected Countries 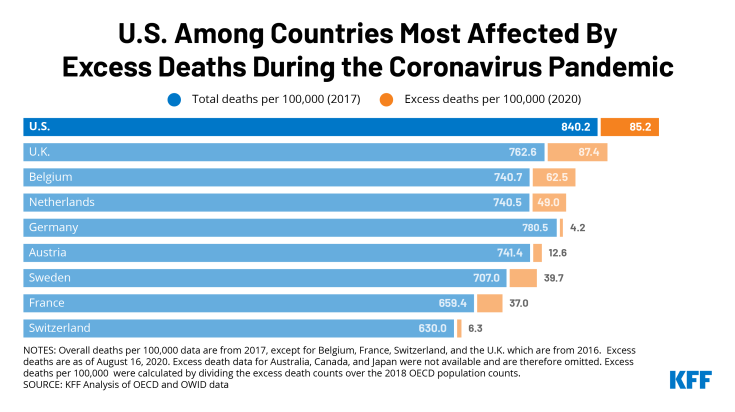 We put the coronavirus pandemic’s toll into perspective by comparing where COVID-19 falls as a leading cause of death in the U.S. versus peer countries (Organisation for Economic Co-operation and Development (OECD) member nations with above median GDP and above median GDP per capita). On a per capita basis, excess deaths this year are highest in the United States and the United Kingdom. Taken together these findings suggest the pandemic will likely increase the existing mortality rate gap between the U.S. and its peers.

During pandemics, epidemiologists use excess deaths as a measure to put official death counts in context. Excess deaths represent the number of deaths exceeding what is expected in a typical year. Excess deaths in 2020 serves as a good proxy for the potential mortality directly or indirectly associated with the COVID-19 pandemic.

However, using more recent data from August 30, 2020, the U.S. has a higher rate of excess deaths per 100,000 at 90.1 than the U.K., which has 89.6 per capita. This data was not used in the chart above because not all countries reported data as of this week. The U.S. already had the highest overall deaths per capita over peer countries prior to COVID-19, with an additional 60 overall deaths per 100,000 people over the next closest country, Germany. Germany has 5 percent of the excess deaths per capita as the U.S. so far in 2020 at 4.2 per 100,000.  COVID-19 will therefore likely increase the mortality gap between the U.S. and peer countries.