Vaccine Monitor: More than Half of Rural Residents Have Gotten a COVID-19 Vaccine or Intend to Do So as Soon as Possible

1 in 5 Rural Residents Say They Definitely Won’t Get Vaccinated, Reflecting the Larger Share of Republicans and White Evangelical Christians Who Live There; Most Rural Residents Say Vaccine Supply and Access is Not a Problem, though Black Residents Report Greater Difficulties

More than half (54%) of rural adults say they have already gotten at least one dose of a COVID-19 vaccine or will do so as soon as possible, as rural residents report less issues with both supply and access than those living in urban and suburban areas, according to a new KFF COVID-19 Vaccine Monitor report focused on rural America.

A somewhat larger share of rural residents (39%) than those living in urban (31%) or suburban (31%) areas say they have already received at least one dose of a COVID-19 vaccine.

However, there is a larger share of rural residents (21%) than urban (10%) or suburban (13%) ones saying they will “definitely not” get a COVID-19 vaccine, a gap largely explained by the concentration of Republicans and White Evangelical Christians who live there.

Among rural residents who say they will “definitely not” get vaccinated, nearly three quarters (73%) identify as Republican or Republican-leaning, and 4 in 10 (41%) identify as White Evangelical Christians.

“There’s nothing inherently unique about living in a rural area that makes people balk at getting vaccinated,” KFF President and CEO Drew Altman said. “It’s just that rural areas have a larger share of people in the most vaccine-resistant groups: Republicans and White Evangelical Christians.”

The new report examines in depth the vaccine-related views and experiences of a nationally representative sample of rural residents. Earlier Vaccine Monitor reports showed concerns about vaccine uptake among this group, which represents about a fifth of the nation’s population and has often reported difficulty accessing health care.

Among rural residents who have not received a COVID-19 vaccine, few (11%) say they have tried to get an appointment – half the share of those living in urban (21%) and suburban (22%) areas.

The large share of rural residents who say they will “definitely not” get vaccinated, and the relatively small shares who have tried to get an appointment or who hope to get vaccinated “as soon as possible” suggest the potential for vaccination rates in rural America to eventually lag behind those in urban and suburban areas.

Rural residents are more likely to say that their area has enough COVID-19 vaccine to serve their communities (58%) than residents of urban or suburban communities are (46% each). In addition, two thirds (68%) of rural residents say there are enough locations to get vaccinated, compared to just over half of urban (52%) and suburban (55%) residents.

Importantly, fewer Black rural residents (53%) than White (69%) or Hispanic (67%) rural residents say there are adequate vaccination locations in their communities. In addition, half of Black (47%) and Hispanic (52%) residents, compared to 6 in 10 White adults (59%), say there is an adequate supply of vaccine.

“Contrary to conventional wisdom, most rural residents have embraced the COVID-19 vaccine, with over half saying they’ve gotten it already or want to get it as soon as they can,” KFF Executive Vice President Mollyann Brodie said. “Most people in rural areas believe their communities have enough vaccine and places to get vaccinated, though fewer Black residents do, suggesting a gap in access.”

The report also captures the impact of a variety of potential incentives, messages, and pieces of information on vaccination uptake.

Similar to the general public, various incentives and messages are most effective in moving rural residents in the “wait and see” and “only if required” groups. For example, at least half of those in the “wait and see” group say hearing that the vaccines are nearly 100% effective at preventing hospitalization and death from COVID-19 (64%) or that scientists have been working on the technology used in the new COVID-19 vaccines for 20 years (52%) will make them more likely to get vaccinated.

Across the board, none of the messages or pieces of information were effective at moving those who say they will definitely not get vaccinated. 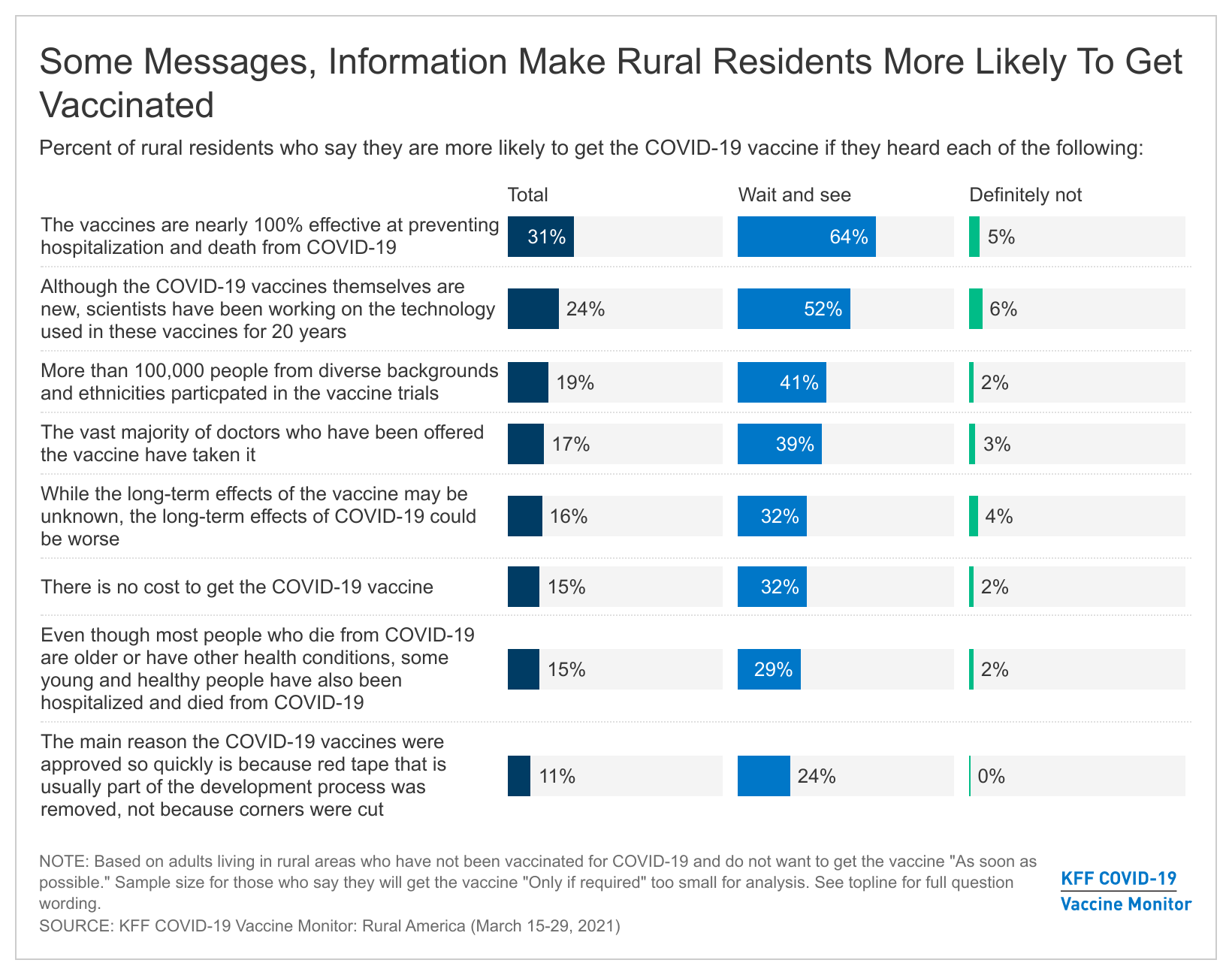 Designed and analyzed by public opinion researchers at KFF, the KFF Vaccine Monitor: Rural America was conducted from March 15-29 among a nationally representative random digit dial telephone sample of 1,001 adults living in rural America, the margin of sampling error is plus or minus 4 percentage points. For results based on subgroups, the margin of sampling error may be higher. All comparisons to urban and suburban residents are from the KFF March Vaccine Monitor.
The KFF COVID-19 Vaccine Monitor is an ongoing research project tracking the public’s attitudes and experiences with COVID-19 vaccinations. Using a combination of surveys and qualitative research, this project tracks the dynamic nature of public opinion as vaccine development and distribution unfold, including vaccine confidence and hesitancy, trusted messengers and messages, as well as the public’s experiences with vaccination.