Deaths From COVID-19 Spiked Over The Summer, Especially Among People 65 and Older, Before Dipping Again in September

While Overall COVID Deaths Remain Much Lower Than Earlier in the Pandemic, The Share Dying Who Are 65 Or Older (88%) Is The Highest Yet

Although COVID-19 fatalities remain much lower than during the peak of last winter’s Omicron surge, deaths among people 65 and older spiked over the summer, more than doubling between April and July 2022, finds a new KFF analysis. The number of deaths topped more than 11,000 people 65 and older in both July and August.

The numbers illustrate that, despite the determination of many Americans to move on and resume normal activities, COVID-19 continues to exact a toll, especially among older adults. As of the week ending October 1, 2022, the United States had lost nearly 1.1 million lives to COVID-19, including about 790,000 people ages 65 and older. Although people 65 and older are 16 percent of the country’s population, they account for 75 percent of all COVID deaths to date.

In fact, since the summer of 2021, COVID deaths among people 65 and older have been growing as a share of all deaths. The nearly 7,100 deaths among this age group in September of 2022 accounted for 88 percent of all COVID deaths that month – the highest share since the pandemic began. (The absolute number of monthly COVID deaths in this age group peaked at more than 85,000 in January 2021.) The new analysis contains detailed data on the number and share of COVID-19 deaths by age in each month of the pandemic. 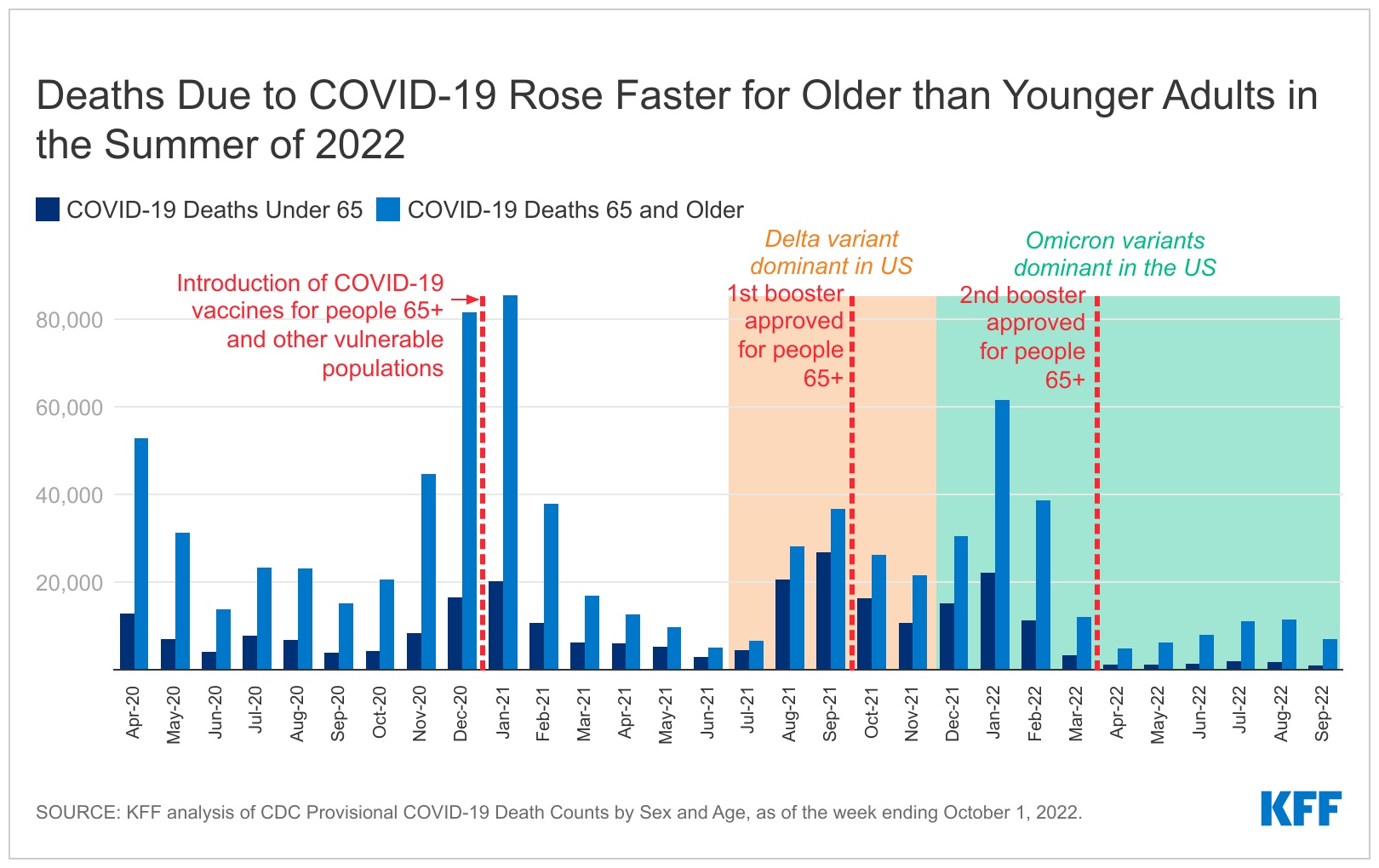 The recent rise in deaths is primarily a function of increasing cases due to the more transmissible Omicron variant. Other factors include relatively low booster uptake and waning vaccine immunity, underscoring the importance of staying up to date on vaccination, particularly for older adults. Last month public health authorities began encouraging eligible Americans to get new bivalent booster shots recently authorized by the Food and Drug Administration that target both the original strain of the virus and the more recent Omicron subvariants.

A second analysis released today examines COVID vaccination rates among residents and staff of nursing facilities, where the virus poses a particularly strong threat, and finds that although initial vaccination rates for both groups were quite high, take-up of earlier boosters has been lower. (Sufficient data on take-up of the bivalent boosters is not yet available, however.)

Recent KFF polling shows that public awareness about the new boosters is modest, although older adults — who tend to be at greater risk of serious illness and death — are most likely to know about the new shots. About a third (32%) of all adults say that they’ve either gotten the new booster (5%) or intend to do so as soon as possible (27%). Among older adults (ages 65 and up), nearly half (45%) say they’ve already gotten the new booster (8%) or plan to get it as soon as possible (37%).

For more data and analyses about Medicare Advantage, visit kff.org