The Supreme Court’s impending ruling on Dobbs v. Jackson Women’s Health Organization has renewed attention to medication abortion as a way to expand access to abortion in states protective of abortion access and to preserve access to abortion in states that seek to enact restrictive laws. In recent years, telehealth has been explored and tested as a way to expand access to medication abortion, with growing importance for communities with few abortion providers. This approach has gained additional attention given the need to limit in-person contact during the COVID-19 pandemic.

However, expanding access to medication abortion via telehealth has been limited by a Food and Drug Administration (FDA) restriction that had permitted only certified clinicians to dispense mifepristone at a health care setting. Enforcement of this requirement has been temporarily paused during the pandemic emergency. On December 16, 2021, the FDA permanently revised the policy following a review prompted by a lawsuit challenging these rules. This change, which no longer requires clinicians to dispense the drug in person, opens the door in many states for more people to have access to medication abortion via telehealth. However, the impact of this policy change will not be the same across the country, as many states have established abortion-specific policies that either require abortion patients to come in person to get the service, set their own policies regarding the dispensing of the medications used for abortion care, or directly ban the use of telehealth for abortion care.

This brief outlines the intersection of federal policy regarding dispensing medication abortion with state laws regulating the provision of abortion services and mifepristone dispensing via telehealth and considers the implications of the recent FDA change in different states.

Mifepristone, often referred to as medication abortion, RU-486, or the abortion pill, was approved by the FDA as a medication to end pregnancy 20 years ago. A regimen of mifepristone, followed by misoprostol, is an FDA approved protocol for abortion during the first 70 days or up to 10 weeks after the first day of a missed period. Medication abortions account for over a third (39%) of all abortions in the US. Medication abortion is a safe and highly effective method of pregnancy termination. The pregnancy is terminated successfully 99.6% of the time, with a 0.4% risk of major complications, and an associated mortality rate of less than 0.001 percent (0.00064%).

In 2011, the FDA added a Risk Evaluation and Mitigation Strategy (REMS) to the dispensation requirements for mifepristone (see box below), which permitted only medical providers who had received special certification from the manufacturer to prescribe and directly dispense the drug. This requirement not only limited the number of clinicians able to prescribe medication abortions, necessitated a visit to a health care setting and also meant patients could not obtain the medication from a retail pharmacy or by mail.

On December 16, 2021, after an extensive scientific review of the safety of medication abortion in part prompted by litigation, the FDA removed the in-person dispensing requirement for Mifepristone and now allows certified pharmacies, in addition to certified providers, to dispense the drug. Both of these changes broadened the modes in which the medication can be dispensed. However, the FDA still requires doctors and pharmacies to be certified by the manufacturers. In April 2022, the manufacturers will submit proposed protocols to the FDA.  After the FDA accepts the submissions, it has 180 days to review or modify the proposed protocols. Pharmacies may be able to sign up for certification to dispense mifepristone by late 2022. In the meantime, the Federal Public Health Emergency allows the FDA to pause enforcement of the health care setting dispensing requirement.

Access to medication abortion hinges not only on the Federal FDA’s decision but also on the abortion-specific regulations that are on the books in many states (Appendix 1). While some states have directly banned telemedicine abortions, other state regulations—including ultrasound and counseling requirements, waiting periods, and specific in-person dispensing mandates—also play a role in limiting the feasibility of using telehealth for medication abortion. The map below illustrates how state laws force people to make, in some cases, multiple in-person visits to a clinic to complete a medication abortion. In states without restrictions, people do not need to make any visits to a clinic to safely have a medication abortion under the supervision of a health care provider.

.
As the option of telehealth abortions has been broadened federally, some states have moved to enact new policies that further restrict access to medication abortion. For example, an executive order by South Dakota’s Governor directed the state’s health department to ban telehealth for medication abortion. The Department established a new rule requiring pregnant patients to obtain each of the drugs used in medication abortion—mifepristone and misoprostol— in person at a licensed abortion facility, and to come back for a follow up visit. The FDA has never required misoprostol to be dispensed by a doctor or taken at a medical facility and there is no FDA requirement for an in person follow up visit. South Dakota also requires an in-person counseling and consent visit and a 72-hour waiting period before any abortion care can be provided. With the new rule, patients would be required to have 4 in-person visits (Figure 2). Planned Parenthood, the only abortion provider in South Dakota, has challenged South Dakota rule, stating, “The Rule will impose severe obstacles to abortion access for South Dakotans and may subject patients to unnecessary health risks, with absolutely no benefit to health and safety, in violation of their constitutional rights.” On January 26, 2022, the day before the rule would have become effective, the federal district judge blocked the state from enforcing the rules while the litigation continues. 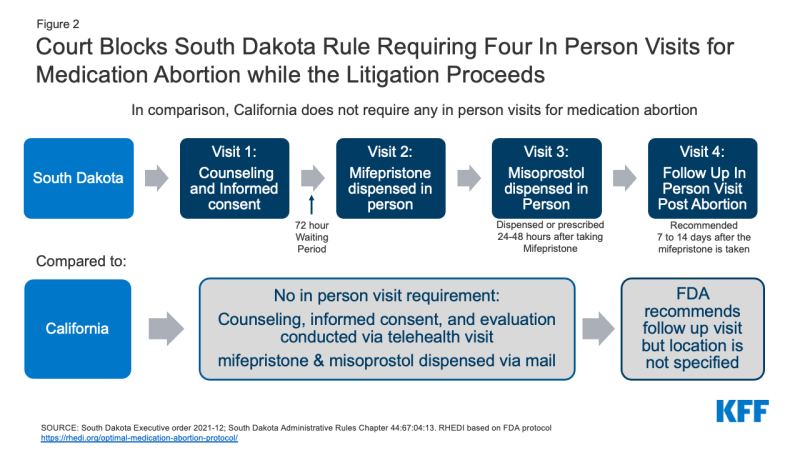 In the run up to the FDA’s change in policy in 2021, six states (AZ, IN, OH, MT OK, and TX) passed laws banning mailing abortion medication. Although the Montana and Ohio laws are currently blocked by court order, other states could move to enact similar policies. In contrast, patients in states that have no restrictions can obtain a medication abortion with a telehealth visit and no required in-person visits.

It is unusual, but not unheard of, for states to enact policies that overrule an FDA-established protocol for dispensing a drug. In 2014 Massachusetts attempted to restrict an opioid more stringently than the FDA recommended, and after the manufacturer sued, a court invalidated the law, finding the state law was preempted by federal law. The court ruled that allowing the law to stand would “undermine the FDA’s ability to make drugs available to promote and protect the public health.” It is unknown whether the same preemption argument might be used to challenge state laws that restrict use of mifepristone to earlier in pregnancy than 10 weeks, the time period allowed by the FDA-approved protocol. For example, in 2021 a new Texas law (SB 4) restricts the use of mifepristone to 7 weeks. The recent Texas law on medication abortion has not yet been challenged.  Furthermore, it is not clear how states’ authority to regulate or ban mifepristone will be affected if the Supreme Court overturns Roe v. Wade and eliminates the constitutional right to terminate a pregnancy before viability.

Federal and state policy both impact the availability of medication abortion. While the FDA has modified the rules in which mifepristone can be dispensed, the availability of telehealth for abortion medication will continue to vary by state. In some states, the option of a telehealth medication abortion will expand access to abortion for the people who reside there. In other states where there are laws or policies that fully ban telemedicine abortion or greatly restrict the circumstances in which this service can be provided and obtained, there is less clarity. Can out-of-state providers who provide telehealth abortion services to people residing in states that ban or restrict it be prosecuted? Or are there actions that policy makers in states that allow telehealth abortion can take to protect the clinicians who reside in their states? Distribution issues, such as whether providers can mail the medication across state lines and whether patients would need to travel to access the medication, are still not clearly resolved.

Later this year, the Supreme Court will issue its decision in Dobbs v. Jackson Women’s Health Organization, that could dramatically alter the landscape of abortion law in states across the country. It is clear that the FDA’s decision to remove the in-person requirements for dispensing mifepristone will greatly expand access to abortion care through telehealth, particularly for people living far from clinics in states that will continue to allow abortions regardless of the Supreme Court’s decision in Dobbs. What is less clear, however, will be the impact of existing and forthcoming state policies limiting abortions on the availability of medication abortion for the people who reside in those states. Regardless of the outcome of the Mississippi law being challenged at the Supreme Court, access to medication abortion—either over state lines by mail or when traveling from a state that bans abortion to one that permits it—could play an increasingly important role for those seeking abortion care.