Medication abortion, also known as medical abortion or abortion with pills, is a pregnancy termination protocol that involves taking two different drugs, Mifepristone and Misoprostol, that can be safely used up to the first 70 days (10 weeks) of pregnancy. Since the U.S. Food and Drug Administration (FDA) first approved the drug in 2000, its use in the United States has quickly grown, with over a third of abortions at 8 weeks gestation or less being medication abortions. While this protocol involves taking two medications, and does not involve a medical procedure, it is subject to many of the same abortion specific provider restrictions as other abortion methods, at both the state and federal levels. This factsheet provides an overview of medication abortion, with a focus on federal and state regulations pertaining to its provision and coverage, and the role of the drug in self-managed abortions.

What is a Medication Abortion?

The most common medication abortion regimen in the United States involves the use of two different medications: mifepristone and misoprostol. Mifepristone, sold under the brand name Mifeprex and also known as the abortion pill, RU-486, blocks progesterone, a hormone essential to the development of a pregnancy, and thereby prevents an existing pregnancy from progressing. Misoprostol, taken 24-48 hours after mifepristone, works to empty the uterus by causing cramping and bleeding, similar to an early miscarriage. A follow-up visit is typically scheduled a week or two later, to confirm that the pregnancy was terminated via ultrasound or blood test. Medication abortion is a safe and highly effective method of pregnancy termination if the pills are administered at 9 weeks’ ge­­station or less, the pregnancy is terminated successfully 99.6% of the time, with a 0.4% risk of major complications, and an associated mortality rate of less than 0.001 percent (0.00064%).

Until 2019, mifepristone was only sold under the brand name Mifeprex, manufactured by Danco Laboratories. The FDA first approved Mifeprex in 2000, and in 2016, the FDA approved a new evidence-based regimen and drug label, which guides current clinical practice. This regimen approves use of medical abortions for up to 70 days (10 weeks) of pregnancy (Table 1).

Mifepristone cannot be dispensed by retail pharmacies like most other medications; rather pregnant patients can only obtain the drug directly from a certified medical provider who has filled out a prescriber agreement form from the manufacturer about the proper use of the drug. This is because the FDA has applied a Risk Evaluation and Mitigation Strategy (REMS) for Mifeprex since 2011 (See Box 1).

The FDA guidelines and label for Mifeprex apply equally to the approved generic. The FDA-approved REMS program for Mifeprex, and now, the generic mifepristone, also includes Element to Assure Safe Use (ETASU), a stronger version of REMS, and contains three provisions:

On October 3, 2017, the American Civil Liberties Union (ACLU) filed a lawsuit, on behalf of a group of providers, against the FDA challenging the REMS requirements for mifepristone. These plaintiffs cite the low rate of complications associated with medical abortions and assert that other drugs with similar or more serious risks do not have REMS restrictions, and are unduly burdensome on patients trying to access the drug, particularly patients in rural or medically underserves areas. The District Court of Hawaii is waiting to take action on this case until the Supreme Court issues a decision in June Medical Services LLC v. Russo which involves both the “third-party standing” of providers to bring legal challenges on behalf of their patients, and the assessment of “undue burden” in abortion cases. In May 2020, the ACLU filed another lawsuit challenging the REMS requirement that mifepristone be dispensed in-person; this was filed on behalf of the American College of Obstetricians and Gynecologists (ACOG), in addition to other organizations.

Federal and state-level regulations have effectively limited the use of mifepristone, particularly in underserved areas without a nearby clinic. Studies show providers of medication abortion are mostly concentrated where surgical abortion is already available. Many state laws regulating abortion providers apply to all types of abortion procedures. For example, 17 states require the clinic to meet structural standards comparable to ambulatory surgical centers, such as maintaining standard operating rooms, surgical examination tables, and more. Seven states require that abortion providers have hospital admitting privileges or an alternative arrangement in place. Many states have also passed laws specifically pertaining to medication abortion, such as specific counseling and provider requirements. Currently, the 33 states permit only licensed physicians to dispense mifepristone pills (Figure 1). Research demonstrates that advanced practice clinicians (APCs), such as nurse practitioners, physician assistants, or nurse-midwives, can dispense provide abortion pills as safely as physicians can, but they are only permitted do to so in 17 states and DC. 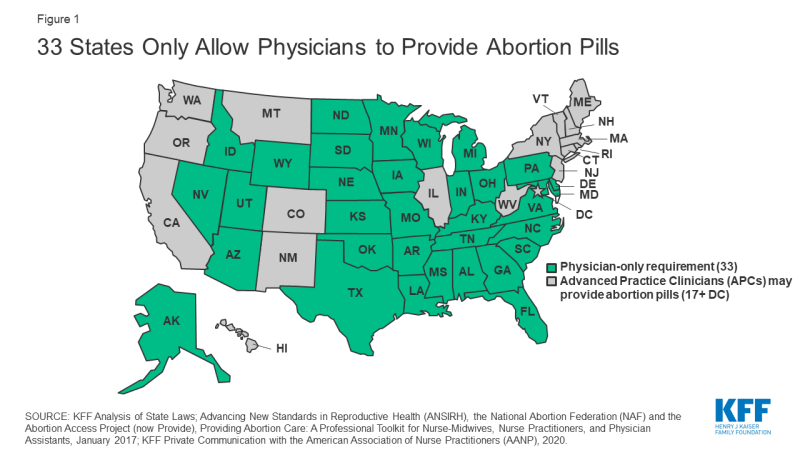 Arkansas, Idaho, Kentucky, Nebraska, Oklahoma, South Dakota, and Utah have enacted laws that require providers to counsel patients that medication abortion may be reversed if given a high dose of progesterone after taking mifepristone despite a lack of scientific evidence to support this claim. Similar laws were passed in Arizona, North Dakota, and Kansas, with courts blocking the laws in Arizona and North Dakota, and the Governor vetoing the bill in Kansas.

Insurance coverage for abortion is heavily regulated at both the federal and state level. Since 1977, the federal Hyde Amendment has banned the use of any federal funds for abortion, unless the pregnancy is a result of rape, incest, or if it is determined to endanger the woman’s life. After the FDA approved Mifeprex in 2000, this law also applied to medication abortions. However, a 2019 study from the U.S. Government Accountability Office (GAO) found that 14 state Medicaid programs do not cover mifepristone even in the cases of rape, incest, and life endangerment as is required by the Hyde amendment.

States also regulate fully insured private insurance, including plans on the Affordable Care Act (ACA) Marketplaces. 11 states limit abortion coverage in private insurance plans – some of these states follow the Hyde exceptions, while others are more restrictive. In 2020, 33 states had no ACA Marketplace plans that offered abortion coverage, with 26 states categorically banning it. Several plans that offered coverage for abortion procedures did not cover medication abortion, and some plans that did offer abortion coverage had differences in gestational limits, annual/lifetime caps on claims, and coverage of mifepristone. Conversely, six states (California, Illinois, Maine, New York, Oregon, and Washington) require all state-regulated private health plans (including Marketplace plans) to include abortion coverage. Self-insured plans are not regulated by state insurance law, and federal law does ban or require abortion coverage in self-insured plans. Although there has been no recent research on abortion coverage offered by fully insured plans in the remaining 33 states and the District of Columbia, Danco Laboratories offers a collection of state payer policies and how they relate to Mifeprex.

In 2014, the average amount paid for a medication abortion up to 10 weeks was $535, while the average amount paid for an abortion in a clinic and local anesthetic was $508. Although Danco Laboratories does not make the cost of Mifeprex public, providers report that Mifeprex costs them around $90 a pill. GenBioPro, the manufacturer of the generic mifepristone drug also does not report the cost of their pill, but has stated that they want to drive down costs for those who choose medication abortion.

For those who do not have abortion coverage, there are other a limited means of financial support, promoted on both Danco and GenBioPro’s website. The National Abortion Federation, as well as local abortion funds are sometimes able to cover some of the cost of an abortion (including travel) for a pregnant person. Outside of these funding sources or a sliding fee scale clinic, there are few options to help with abortion costs.

Although the overall rate of abortion has continued to decline, the use of medication abortion has greatly increased over the years, and now makes up roughly 41% of all abortions at 8 weeks gestation or less (Figure 2). 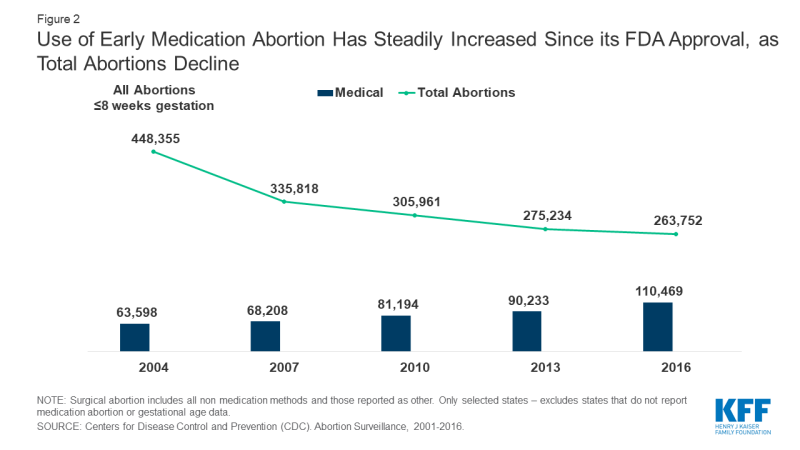 Figure 2: Use of Early Medication Abortion Has Steadily Increased Since its FDA Approval, as Total Abortions Decline

According to Danco Laboratories, by 2016, over 2.75 million women in the United States have used Mifeprex since its FDA approval in 2000. Data from the Centers for Disease Control and Prevention (CDC) shows that from 2007 to 2016, reported abortions at 8 weeks gestation or less increased by 2.5%, while reported abortions between 9-13 weeks decreased by 7.9%. A 2017 Guttmacher Institute Report found that medication abortion performed up to 9 weeks gestation accounted for 39% of all nonhospital abortions.

Telemedicine, or telehealth, can be used to expand access to health services in areas where the number of providers is limited. Many women, particularly those who live in rural communities, have to travel long distances to obtain abortion services, which has raised interest in the potential of telemedicine to expand access medication abortion. Because the newest FDA label allows women to take the pills after leaving the clinic, telemedicine has emerged as a viable option to expand the availability of abortion to women who are either unable to travel to clinic or for other reasons wish to have an abortion in the privacy of their own home. 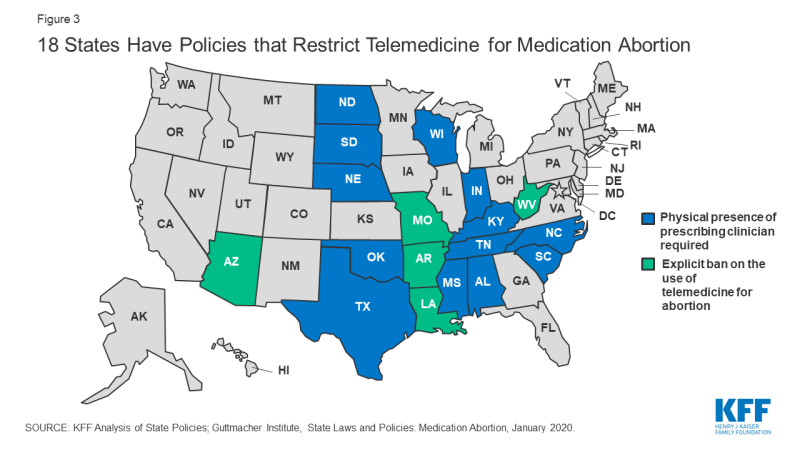 Figure 3: 18 States Have Policies that Restrict Telemedicine for Medication Abortion

Self-managed abortion, sometimes referenced as “self-induced” or “at-home” abortion, is when a person ends a pregnancy outside the medical care setting, typically by ordering abortion pills online. This practice is legal in the U.S., but is permitted in some other countries. Women may w may seek to manage their own abortion for many reasons, including clinic access barriers, cost, transportation, and privacy. The median cost of mifepristone-misoprostol products ordered online is approximately $205, about half of the average charge for a clinic abortion. Legal barriers, such as the threat of criminal charges, to self-managed abortion affect pregnant people as well as those who help them in ending their pregnancy.

Women Help Women, which already operates to provide pills to women in other countries, recently launched Self-managed Abortion; Safe and Supported (SASS), to provide information about self-managed medication abortion to women in the United States. However, due to legal barriers, they do not ship pills to women in the United States. A few projects, such as the Plan C Campaign, are now working to inform women in the US about self-managed abortions, including how to appropriately take the drugs, how they might access funds to pay for them, and a list of online retailers with reviews on price, ship time, product quality, and physician oversight. The FDA has issued warning letters to some of these organizations, including Aidaccess.org and RAblon, asking them to immediately cease the introduction of abortion medications into the U.S., as mifepristone may only be legally dispensed using the REMS protocol.

Even as overall rates of abortion decline, the use of medication abortion has grown significantly since its approval by the FDA in 2000. The drug’s availability may have shifted the average time abortions occur to earlier in pregnancy. Its uptake, however, has been limited by federal and state regulations. Including the FDA REMS requirement, bans on telemedicine and requirements for in person dispensation of mifepristone, and requirements for in person counseling visits and other tests that are not medically recommended for safety. While some states continue to impose regulations that restrict access, others are exploring ways of increasing access by allowing non-physician clinical providers to prescribe mifepristone and testing the effectiveness of telemedicine to expand access to abortion services for those who seek them.