Millions of previously uninsured Americans have gained access to health coverage through the Affordable Care Act (ACA) Marketplace plans. The provider networks of the Marketplace plans determine where enrollees can seek medical care. Many of these individuals have received their care for years from safety-net providers, such as community health centers and family planning clinics. Recognizing the important role these providers play in promoting continuity of care as people transition from being uninsured and relying on safety net clinics to private insurance, and to meet the increased demand for medical care in underserved communities, Congress established general requirements to assure that these providers have the opportunity to participate in the health plans that are offered through the Marketplaces. These safety net clinics and hospitals are referred to as Essential Community Providers (ECPs), and the ACA specifically requires that Qualified Health Plans available through the federal or state insurance Marketplaces have a “sufficient number and geographic distribution of ECPs, where available, to ensure reasonable and timely access to a broad range of such providers for low-income, medically underserved individuals in the plan’s service area.”1 Because both the Center for Medicare and Medicaid Services (CMS) and state regulators can have the authority to decide how to implement the broad ECP standard, there is considerable variation across the country in both the categories of providers included as ECPs as well as the standards required for inclusion in plan networks. This brief reviews the definition of ECP, examines the federal and state rules that govern the extent to which plans must include these providers in their networks, identifies the variation from state to state, and discusses the particular importance of these rules and providers for women’s access to care.

ACA Requirement for Essential Community Providers (ECPs) Qualified Health Plans must have a “sufficient number and geographic distribution of ECPs, where available, to ensure reasonable and timely access to a broad range of such providers for low-income, medically underserved individuals in the plan’s service area.”Source: PPACA § 1311 (c)(1)(C); 45 CR 156.235

What are Essential Community Providers?

In 1993, the term “Essential Community Provider” was first introduced in the Health Security Act, proposed under President Clinton. Although that proposal failed, some states adopted legislation requiring managed care plans or Medicaid to include ECPs in their networks.2 ECPs have traditionally included health centers, public hospitals, public health departments, family planning clinics, and community mental health clinics. ECPs collectively provide a wide range of physical and mental health services including, sexual and reproductive health care, preventive health screenings, vaccines, counseling, rehabilitation and referrals to millions of people each year. There is a large network of safety-net providers in the U.S. that serve low-income and medically underserved communities.

In March 2014, CMS issued a letter to all insurers participating in the Federally Facilitated Marketplace4 identifying six ECP designated categories that meet the federal definition and setting forth the minimum inclusion standards for plans to meet in order to be certified as Qualified Health Plans for the 2015 plan year.5,6 CMS also developed a non-inclusive state-by-state list of ECPs which specifically listed by name, many but not all ECPs.

In addition to the ECP categories identified by CMS, states have authority to identify and require the inclusion of additional types of providers and categories. While 37 states and the District of Columbia8 exclusively use the CMS identified ECP categories, 14 states have expanded or further clarified the CMS ECP categories to include other specialty providers such as school-based health programs, rural health clinics, and birth centers. For example, Minnesota’s ECP definition, which pre-dates the ACA, includes state hospitals that also specialize in the treatment of cerebral palsy, spina bifida, epilepsy, closed health injuries, and other disabling conditions as an ECP.9 Colorado regulation and Washington law specify that providers who waive charges or charge for services on a sliding scale based on income and do not restrict access or services because of a client’s financial limitation are included in the definition of ECP.10 California includes providers that qualify for the HI-TECH Medi-Cal Electronic Health Record Incentive Programs as ECPs.11 (See Table: Definitions of Essential Community Providers (ECPs) in Marketplaces).

How many ECPs do Marketplace plans have to include in their network? 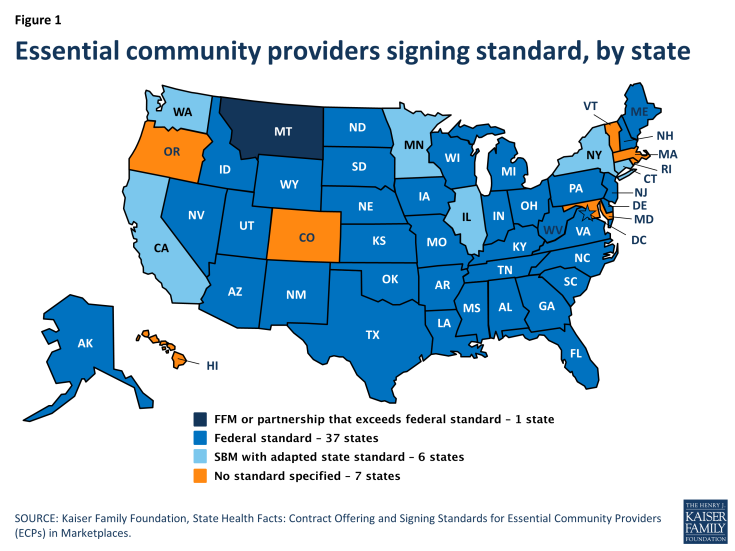 Federally-facilitated Marketplace and State-Partnership Marketplaces: For the 2015 plan year, the CMS-established ECP standard requires QHP applicants to include at least 30% of available ECPs in in each plan’s service area in the provider network and must offer contracts in “good faith” to all Indian Health Service providers as well as at least one ECP from each of the six federally-established ECP categories in each county in the service area, where available.13 CMS has defined “good faith” to mean offering contract terms that a “willing, similarly-situated, non-ECP provider would accept or has accepted.” Montana is the only state utilizing the FFM which has established a higher standard than the required federal standard for plan year 2015; Montana requires issuers to “strive to include at least 80% of all ECPs” listed on a state-issued list.

State-based Marketplaces: States operating their own Marketplace (SBM) can choose to follow the federal standard, develop their own standard, or not establish a specific standard necessary to meet the network adequacy set forth in the ACA, which requires “sufficient number and geographic distribution of ECPs, where available, to ensure reasonable and timely access to a broad range of such providers for low-income, medically underserved individuals in the plan’s service area.”14 Of the 17 states operating their own Marketplace,15 6 states16 have developed their own offering or inclusion standard,17 sometimes in response to the ACA requirements and in some cases because they had network adequacy laws that predate the ACA. (See Table: Contract Offering and Signing Standards for Essential Community Providers (ECPs) in Marketplaces) Notable examples include:

Who is overseeing the ECP standards?

State regulators and CMS have a role in the oversight of the ECP standards for qualified health plans. In 21 states, CMS alone has the oversight role. In 26 states, a state agency or SBM is charged with oversight. And in 4 states CMS and the state agency or SBM share the responsibility of oversight. (See table: Contract Offering and Signing Standards for Essential Community Providers (ECPs) in Marketplaces)

If a QHP application fails to satisfy the CMS-established 30% ECP standard, the issuer can still receive certification to participate on the Marketplace with submission of a written narrative justification explaining the plan’s efforts to meet the standard, how the plan will provide adequate care to enrollees who might otherwise seek care by ECPs not included in the network, and how the plan will meet the ECP standard in the following year. Many states, but not all states using their own definition have adopted a similar policy.

It is unclear how state regulators and CMS are monitoring and enforcing ECP inclusion in Marketplace plans. As carriers are permitted to change networks during a plan year, the representation of ECPs could change in the middle of a plan year. It is important to consider how federal and state oversight of the inclusion of ECPs can be ongoing and not just at the time of certification as a QHP.

Why is inclusion of ECPs in Marketplace plans important for women?

ECPs often provide services that are specifically developed to address the health needs of low income individuals, including language services, patient support services, coordination of health and social services, and location in a low-income community.20 For women, particularly low-income women and women of color, clinic-based providers, family planning clinics and health centers, are important sources of reproductive and sexual health care. 28% of women enrolled in Medicaid and 43% of uninsured women reported they had their most recent gynecological visit at either a clinic or health center (Figure 2). In addition to providing continuity of care for newly insured patients, ECPs that participate in both Medicaid and Marketplace plans’ networks also provide continuous care to patients who move back and forth between private insurance and Medicaid eligibility because of changes in income. The inclusion of ECPs in Marketplace plans could also strengthen the financial viability of clinics that are needed to continue to serve their patients in the post- ACA health insurance market. 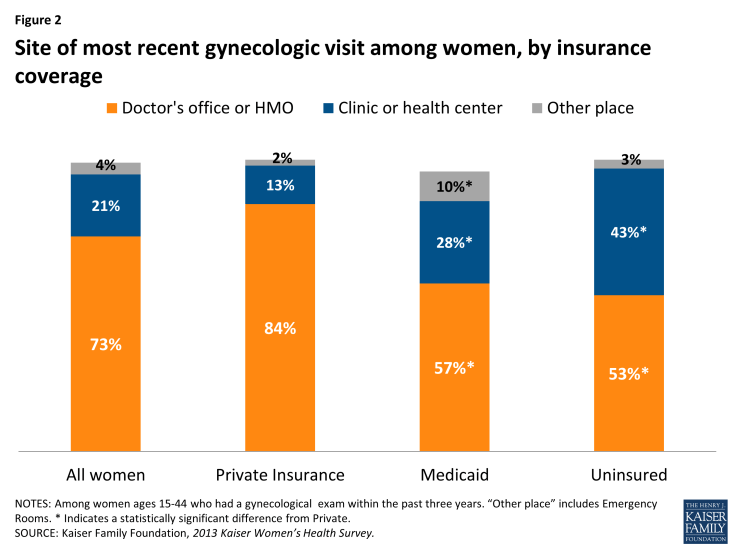 Figure 2: Site of most recent gynecologic visit among women, by insurance coverage

Since 1970, Title X Family Planning centers, which are included in all state and federal ECP definitions, have provided a range of family planning and preventive services to millions of women for free or for a reduced fee based on income. Services typically include most FDA-approved contraceptive methods and counseling, pregnancy testing and counseling, breast and cervical cancer screenings, screening and treatment for sexually transmitted infections (STI), and HIV testing and referral. While Title X Family Planning centers offer services to both men and women, approximately 92% of the nearly five million clients served in 2013 were women.21 In 2013, over 4 in 10 uninsured women said they got their birth control at a family planning or Planned Parenthood clinic, or a community health center (Figure 3). Women who have a choice of providers “say they choose specialized family planning centers because of the respectful, confidential, affordable, and high-quality care they receive from them.”22 Previously uninsured women who now have insurance through the Marketplace may want to continue to seek their sexual and reproductive health care through specialized family planning centers. 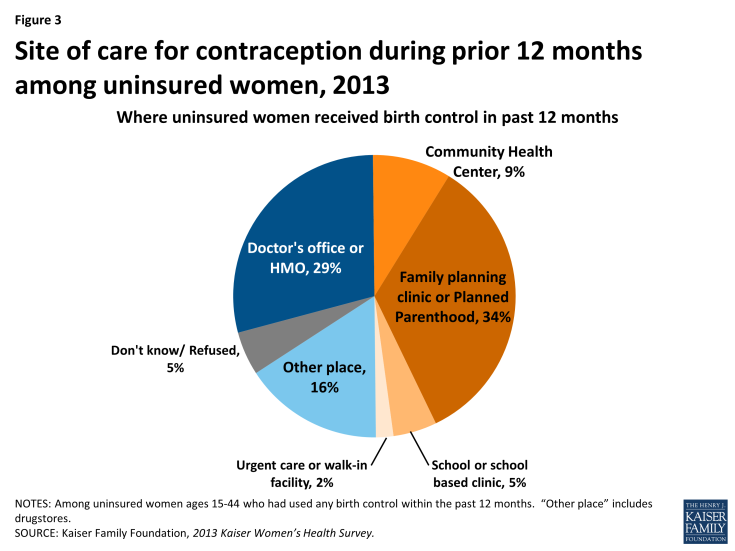 Figure 3: Site of care for contraception during prior 12 months among uninsured women, 2013

ECPs not only play an important role in the provision of preventive health care and related services to low-income women, but also provide health care and treatment for historically underserved populations including minority groups such as Native Americans and Alaskan Natives, immigrant populations and people of color.23 Many ECPs also provide sensitive health services that may be habitually stigmatized and difficult to access within private health plans, such as sexual and reproductive health, mental health, substance use disorder, and HIV/AIDS services, among other specialized health care needs. In 2012, women comprised 29% of HIV positive patients served by Ryan White clinics and 21% of patients served by the AIDS Drugs Assistance Program.

As the ACA broadens access to insurance coverage across the country, it is important to understand and monitor extent to which plans serving previously uninsured populations offer access to care in medically underserved communities, and assure that in-network providers can offer the range of services needed to adequately serve the health needs of new policy holders. Although ECPs, including community health centers and family planning clinics, are required by law to be part of the plan networks, they may not be sufficiently included to assure that their patients have the option of continuity of care. It will be important for CMS and state oversight agencies to monitor the implementation of the current ECP standards to assure that newly insured people can continue seeing their trusted providers at safety-net clinics if they choose and to be sure that midyear changes in plan networks do not compromise access to ECPs. Care provided by ECPs will continue to be as important to those who are newly insured as it is to the millions of remaining uninsured who do not have a pathway to coverage under the ACA.