The Number of Uninsured People Rose in 2017, Reversing Some of the Coverage Gains Under the Affordable Care Act

The number of uninsured people rose by nearly 700,000, to 27.4 million people, in 2017, reversing some of the coverage gains achieved under the Affordable Care Act, according to latest analysis of uninsured data by KFF (the Kaiser Family Foundation).

It was the first uptick in the uninsured since implementation of the ACA in 2014, which helped drive down the number of uninsured people in the U.S. from 44 million in 2013 to under 27 million in 2016. That year the uninsured rate dropped to a historic low of 10 percent. It was 10.2 percent in 2017, the most recent year for which federal American Community Survey (ACS) data are available. 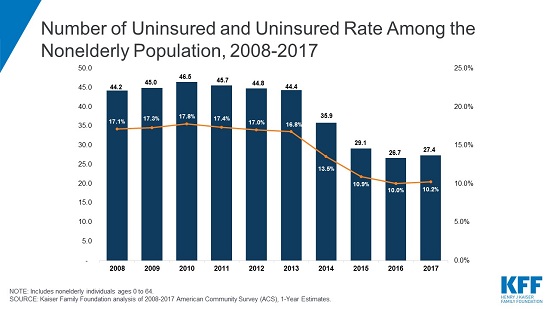 Detailed data on state-by-state changes in the uninsured rate since the implementation of the ACA are available in KFF’s recently updated Key Facts About the Uninsured Population. The fact sheet describes how health insurance coverage has changed in recent years, examines the characteristics of the uninsured population, and summarizes the access and financial implications of not having coverage.