More Than 6 in 10 of the Remaining 27.4 Million Uninsured People in the U.S. are Eligible for Subsidized ACA Marketplace Coverage, Medicaid or the Children’s Health Insurance Program

Recent policy attention has focused on efforts to reduce the number of uninsured people in the U.S. by expanding eligibility for coverage assistance, including enhanced premium subsidies in the Affordable Care Act (ACA) Marketplace and filling the Medicaid “coverage gap.”

A new KFF analysis shows that a majority of the 27.4 million people who remained uninsured in 2020 already are eligible for financial assistance for coverage through Medicaid/CHIP or the Marketplace, suggesting that policies in the Build Back Better Act as well as outreach for the current ACA open enrollment period could help reduce that number. That group includes more than 10 million people who qualify for subsidized plans in the Marketplace and 7 million who are eligible for Medicaid or the Children’s Health Insurance Program. Many people eligible for coverage remain uninsured due to lack of knowledge of coverage options, difficulty signing up, or other reasons.

The new analysis examines the characteristics of the 7 million people who are uninsured and eligible for Medicaid or CHIP. Key findings include:

Three quarters, or 5.2 million people, reside in Medicaid expansion states, which have more people living in them and have higher income eligibility for adults than non-expansion states 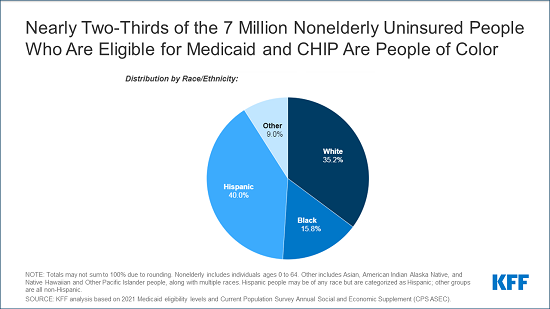 For the full analysis, as well as other data and analyses about the uninsured, visit kff.org.