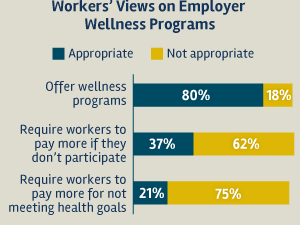 As many employers begin to expand their wellness programs under new guidelines set forth by the Affordable Care Act (ACA), the latest Kaiser Health Tracking Poll finds workers oppose programs that make them pay higher premiums if they fail to participate or meet specific health goals. Overall public opinion of the ACA remains about the same as it has for the last several months, with a somewhat higher share of the public continuing to express an unfavorable view of the law (45%) than a favorable one (39%).