Menlo Park, Calif. – Single and family premiums for employer-sponsored health insurance rose an average of 4 percent this year, continuing a decade-long period of moderate growth, according to the Kaiser Family Foundation/Health Research & Educational Trust (HRET) 2015 Employer Health Benefits Survey released today. Since 2005, premiums have grown an average of 5 percent each year, compared to 11 percent annually between 1999 and 2005.

Since 2010, both the share of workers with deductibles and the size of those deductibles have increased sharply. These two trends together result in a 67 percent increase in deductibles since 2010, much faster than the rise in single premiums (24%) and about seven times the rise in workers’ wages (10%) and general inflation (9%).

“With deductibles rising so much faster than premiums and wages, it’s no surprise that consumers have not felt the slowdown in health spending,” Foundation President and CEO Drew Altman said.

“Employees are benefiting from stable employer health benefits coverage and modest premium growth,” said Maulik Joshi, president of HRET, an affiliate of the American Hospital Association. “Also noteworthy is that many employers are tying financial incentives to employee participation in health and wellness programs.”

The 17th annual Kaiser/HRET survey of nearly 2,000 small and large employers provides a detailed picture of the status and trends in employer-sponsored health insurance, costs and coverage, including employers’ responses to provisions of the Affordable Care Act. In addition to the full report and summary of findings released today, the journal Health Affairs is publishing a Web First article with select findings, and the Foundation is releasing an updated interactive graphic that allows users to chart the survey’s premium trends for different groups, including by firm size, region and industry. 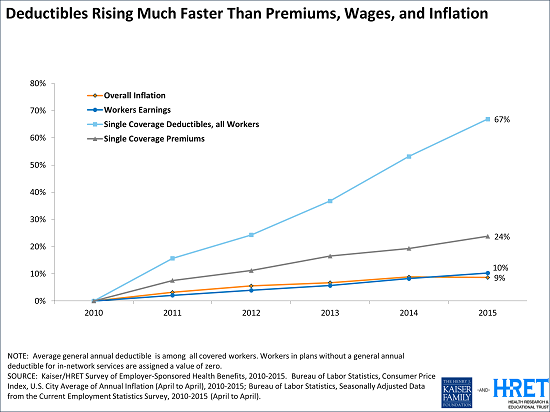 This year, 57 percent of employers offer health benefits to at least some of their workers, statistically unchanged from 55 percent last year. Offer rates vary by firm size, with 98 percent of large firms (200 or more workers) offering coverage, compared to less than half (47%) of the smallest firms (three to nine workers).

Among employers with 50 or more FTEs (or, if they did not know how many FTEs, firms with at least 50 employees), 4 percent report that they changed some job classifications from full-time to part-time (less than 30 hours per week) so employees would not be eligible for health benefits, while 10 percent report changing some job classifications from part-time to full-time to enable workers to obtain coverage. Four percent also report reducing the number of full-time employees they planned to hire because of the cost of health benefits.

The survey provides an early look at employers’ response to the Affordable Care Act’s excise tax on high-cost health plans, sometimes called the “Cadillac tax,” which begins in 2018.

A majority (53%) of large employers (200 or more workers) offering health benefits say that they conducted an analysis to determine if any of their plans would exceed the Cadillac tax thresholds, and about one in five (19%) of this group say their plan with the largest enrollment will exceed the threshold amount. In addition, 13 percent of large firms offering health benefits say they have made changes to their plans to avoid reaching the excise tax thresholds, and 8 percent say they switched to a lower-cost health plan.

“Our survey finds most large employers are already planning for the Cadillac tax, with some already taking steps to minimize its impact in 2018,” said study lead author Gary Claxton, a Foundation vice president and director of the Health Care Marketplace Project.  “Those changes likely will shift costs to workers, but exactly how and how much will vary for individual workers.”

The survey also captures some steps employers have taken to limit their provider networks as a way to reduce costs: 9 percent of firms offering health benefits say that one of their plans eliminated a hospital or a health system from their network, and 7 percent offer a “narrow network” plan, generally considered more limited than the standard HMO network.

The majority of large employers continue to offer wellness programs, such as smoking cessation, weight loss or other lifestyle coaching.  Thirty-eight percent of those offering one of these wellness programs provide a financial incentive for employees to participate or complete the program.  Among these firms, 15 percent offer a maximum incentive greater than $1,000 for all of a firm’s health and wellness programs, including any incentives for health screening.

The annual survey is a joint project of the Kaiser Family Foundation and the Health Research & Educational Trust. The survey was conducted between January and June of 2015 and included 3,191 randomly selected, non-federal public and private firms with three or more employees (including 1,997 that responded to the full survey and 1,194 others that responded to a single question about offering coverage). A research team at Kaiser, HRET and NORC at the University of Chicago, led by Kaiser vice president and long-time project director Gary Claxton, designed, conducted and analyzed the survey. For more information on the survey methodology, please visit the Survey Design and Methods Section.