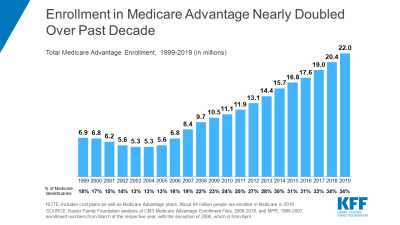 This fact sheet includes the latest information and data about the Medicare Advantage program, including enrollment, plan information, spending and financing for the program, and payment and program changes made by the Affordable Care Act as well as other laws.

In his latest column for The Wall Street Journal’s Think Tank, Drew Altman examines the trends that may be leading to a rise in consumer cost issues on the health agenda. All previous columns by Drew Altman are available online.

This data spotlight report examines trends in the Medicare Advantage marketplace, including the choices available to Medicare beneficiaries in 2014, premium levels and other plan features. Medicare beneficiaries, on average, will have 18 private Medicare Advantage plans available to them in 2014, reflecting both new plans entering the market and old plans exiting it. If Medicare Advantage enrollees remain in their current plans, average monthly premiums will rise by almost $5 per month, or 14 percent, to $39 per month. The analysis also examines some benefits provided by Medicare Advantage plans including drug coverage and caps on out-of-pocket spending, and finds that average out-of-pocket limits across all plans will climb 11 percent to $4,797 in 2014. Additionally, this analysis examines changes in the types of plans available (HMOs, PPOs, etc.), including special needs plans in 2014.

In the latest post in the Policy Insights series, Tricia Neuman draws on the experiences of Medicare beneficiaries during Medicare’s annual enrollment period to consider whether consumers with health insurance coverage through the Affordable Care Act’s new marketplaces will shop for a better deal during their open enrollment season. Previous columns in the Policy Insights series…