This Visualizing Health Policy infographic charts recent trends in employer-sponsored health insurance premiums. Between 1999 and 2015, premiums increased by 203 percent, outpacing both inflation and workers’ earnings. However, growth of premiums for family coverage slowed toward the end of that time period, from an average of 11 percent a year between 1999 and 2005, to 5 percent between 2005 and 2015. In recent years, deductibles rose faster than both premiums and wages, with the average premium for single and family coverage increasing 4 percent between 2014 and 2015.  There is considerable variation in the premiums at different firms; 8 percent of covered workers are enrolled in a family plan worth more than $24,000 and 4 percent are in plans worth less than $10,000 annually.  Over half of large employers conducted an analysis to determine whether they offered a plan which would be subject to the excise tax on high cost health plans slated to take effect in 2018. 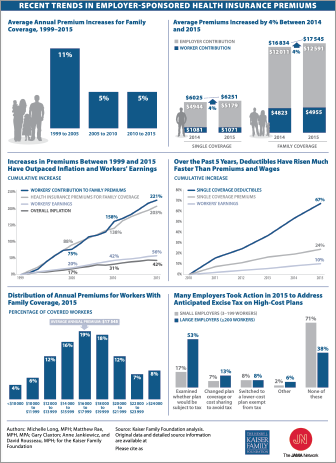