For both women and men in Texas, health care ranks among many priorities that residents would like the state legislature to prioritize. However, when it comes to both public education (76 percent versus 66 percent) and health care programs (59 percent versus 50 percent), a slightly larger share of women than men say the state legislature should increase spending. When it comes to other areas like infrastructure, public safety, transportation, and welfare programs, women and men are about equally likely to support state spending increases. 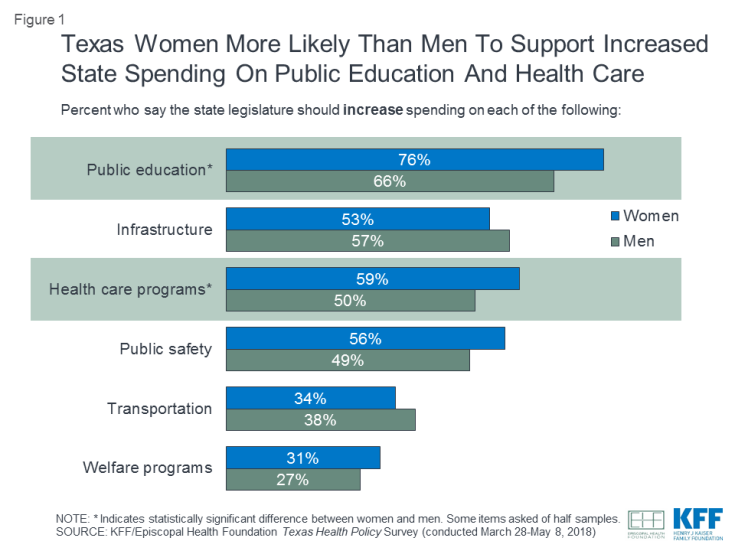 Looking deeper at the question of state health care spending, the overall gender difference on this question appears to be driven largely by differing attitudes between women and men who identify as Republicans. While majorities of both women and men who identify as Democrats and independents say the state legislature should increase spending on health care programs, there is a large gap among Republicans, with 51 percent of Republican women supporting increased state spending on health care programs compared with 29 percent of Republican men. 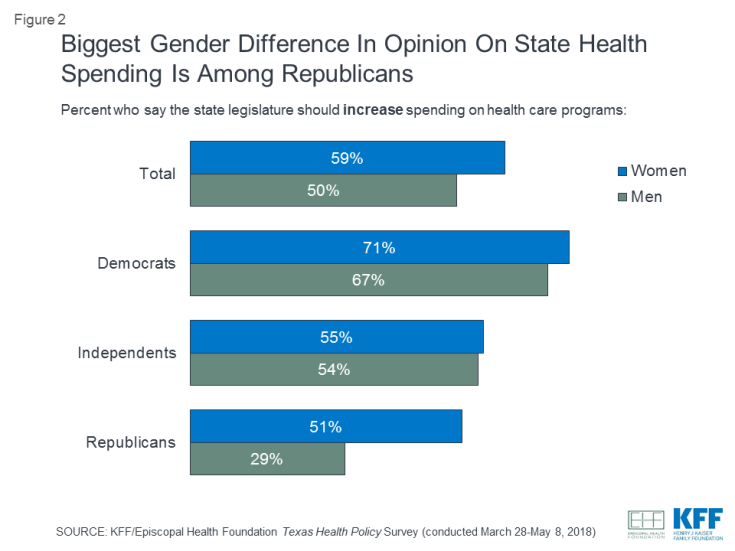 Figure 2: Biggest Gender Difference In Opinion On State Health Spending Is Among Republicans

When it comes to legislative priorities within health care, women and men in Texas generally rank priorities in a similar order, with a few exceptions. Among both women and men, majorities say lowering the cost of health care and prescription drugs, reducing maternal mortality, and increasing access to health insurance should be a “top priority.” The most notable exception to this agreement between women and men is related to increasing funding for mental health programs, which 63 percent of women say should be a top health priority, compared to just under half (46 percent) of men. Similarly, Texas women are more likely than men to say top priority should be given to expanding Medicaid to cover more low-income Texans (50 percent versus 42 percent), improving access to hospitals in rural areas (43 percent versus 33 percent), and increasing women’s access to family planning and contraception (41 percent versus 29 percent). 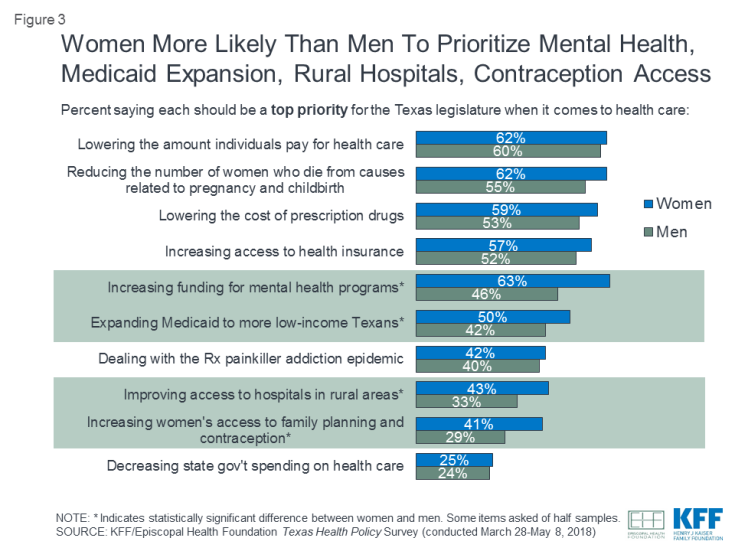 Poll: Most Texans say reducing the number of women who die from pregnancy / childbirth should be a top state priority even though few know about a recent increase in the state’s maternal mortality rate

Reducing the number of women who die from causes related to pregnancy and childbirth ranks high on the list of health priorities that both men and women in Texas want the state legislature to address. However, awareness about recent changes in the maternal mortality rate in the state is low. Although there has been some scientific controversy over the best way to measure maternal mortality, recent studies have observed a rise in these rates in Texas.1 When asked about maternal mortality in the state, a plurality of Texans (43 percent) say the rate has stayed about the same in recent years, while just 17 percent correctly answer that it has increased, another 17 percent think it has decreased, and 23 percent do not know enough to say. College graduates (24 percent) and women of reproductive age (23 percent of those ages 18-44) are only slightly more likely than their counterparts to correctly answer that the rate has increased. 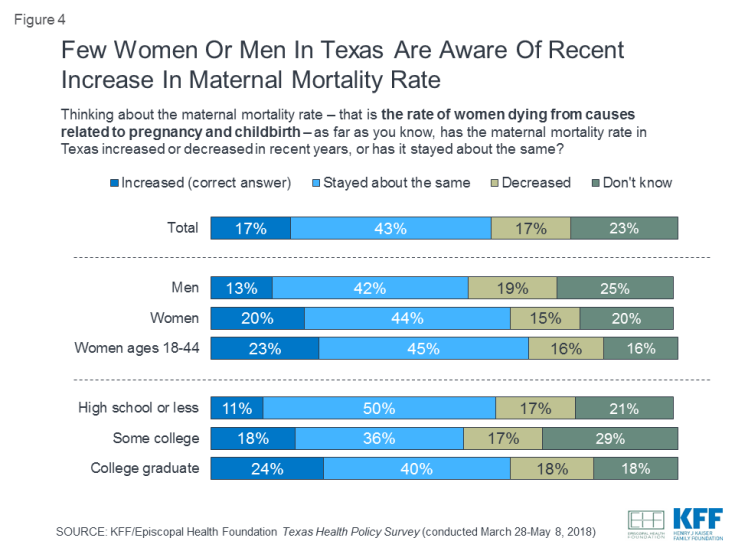 Figure 4: Few Women Or Men In Texas Are Aware Of Recent Increase In Maternal Mortality Rate

Increasing women’s access to family planning services and contraception in Texas is an issue that is rated as a top health priority by a larger share of women than men (41 percent versus 29 percent). Despite this, women and men report similar views about the current state of access to such services in Texas. Overall, about half of Texans (48 percent) say women’s access to family planning services in the state is about right, including similar shares of women and men. However, among women of reproductive age (18-44 years), almost four in ten (37 percent) say it is too difficult for women in Texas to access these services. Partisan differences exist, too, with Democrats and independents more likely to say it’s too difficult for women to get these services, and Republicans about twice as likely as independents or Democrats to say it’s too easy. 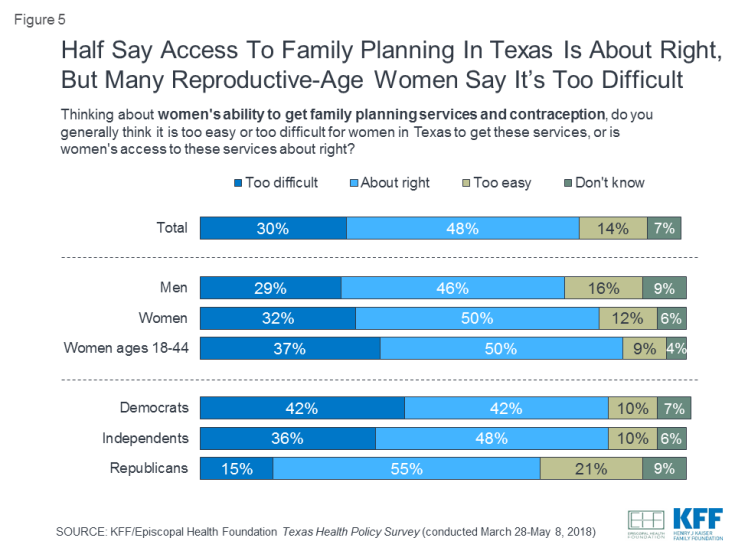 Figure 5: Half Say Access To Family Planning In Texas Is About Right, But Many Reproductive-Age Women Say It’s Too Difficult

In addition to somewhat different opinions about health care priorities for the state, women and men in Texas report different experiences when it comes to health care affordability. While paying for health care can be a burden for both women and men, women are more likely than men to report that their families are struggling with the cost of health care. For example, over four in ten Texas women (44 percent) say they or someone in their family has had problems paying medical bills in the past 12 months, compared with about a third (32 percent) of men.

Women in the state are also more likely than men to say that they or someone in their household has skipped or postponed some type of medical care in the past 12 months because of the cost. Roughly half of women say affordability concerns have led someone in their household to skip dental care or checkups (51 percent) or put off getting needed health care (47 percent); four in ten say a household member has skipped a recommended medical test or treatment (40 percent) or not filled a prescription (38 percent); about a quarter (26 percent) report cutting pills in half or skipping doses of a medicine; and 17 percent say someone in their household has had problems getting mental health care because of the cost. Overall, seven in ten Texas women (69 percent) report at least one of these experiences, compared with just over half (53 percent) of men. These results are consistent with previous national studies that have found women are more likely than men to report problems paying medical bills or forgoing health care because of the cost.2 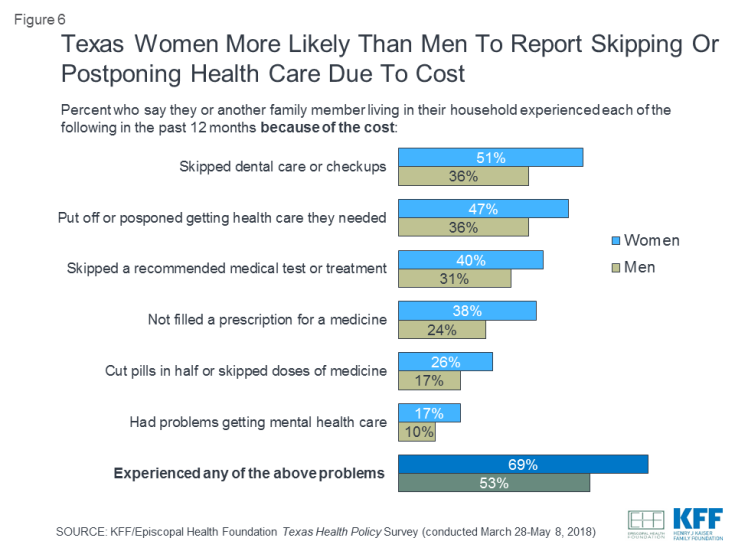 Low-income adults are particularly vulnerable to problems with health care affordability; however it is notable that gender differences in the rates of such problems exist among both lower-income and higher-income Texans. For example, roughly half (53 percent) of Texas women with incomes below 250 percent of the federal poverty level (FPL) say they or a family member had problems paying medical bills in the previous 12 months, compared with about four in ten men (43 percent) with similar incomes. Similarly, lower-income women are more likely than lower-income men to report that someone in their household skipped or postponed some type of medical care in the past year because of the cost (78 percent versus 65 percent). Similar gender differences exist among higher-income households (those with incomes at least 250 percent FPL), with women more likely than men to report problems paying medical bills (32 percent versus 21 percent) and postponing or forgoing care (55 percent versus 41 percent). 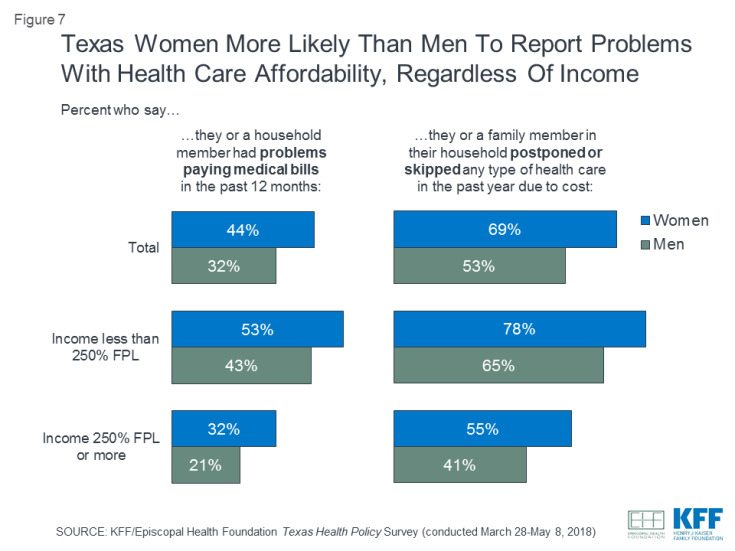 Looking within racial/ethnic groups in Texas, a similar pattern by gender emerges. Among individuals who are non-Hispanic whites, women are more likely than men to report having problems paying medical bills (42 percent versus 25 percent) and forgoing health care because of the cost (67 percent versus 48 percent). Among Hispanics, women are more likely than men to report skipping or postponing some type of health care in the past year because of the cost (72 percent versus 58 percent), but roughly equal shares of Hispanic women and men report problems paying medical bills in the previous year (44 percent and 40 percent, respectively). In addition, 49 percent of Black women in Texas say they had problems paying household medical bills and 62 percent say someone in the household skipped or postponed some type of medical care due to cost (there were too few Black male respondents in the survey sample to report their responses separately. 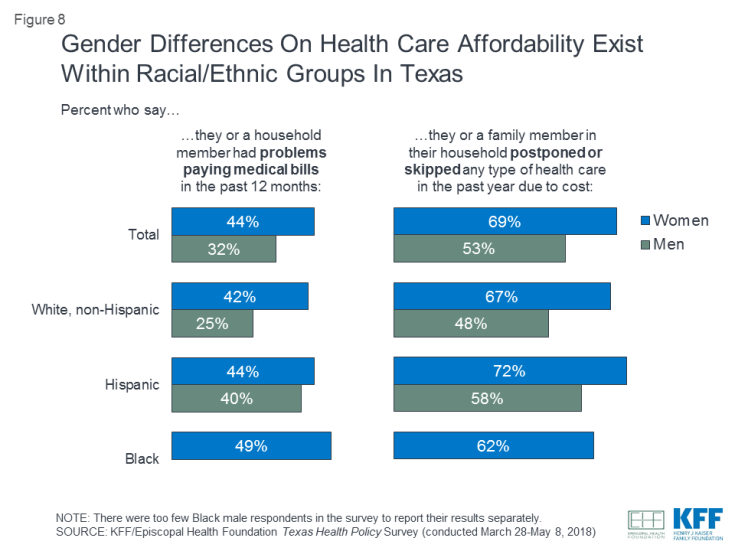 Poll: Most Texans say reducing the number of women who die from pregnancy / childbirth should be a top state priority even though few know about a recent increase in the state’s maternal mortality rate