Non-governmental organizations (NGOs) are key partners in U.S. global health efforts. Indeed, a significant share of U.S. government funding for global health is channeled to NGOs, who act as program implementers on the ground. NGOs also play other roles in global health, including through advocacy, analysis, education and awareness-raising, and fundraising activities. To date, however, little information has been available about the extent of their role in carrying out U.S. global health programs.

To help fill this void, this report provides an analysis of U.S.-based NGOs that received global health funding from the U.S. government (USG) during FY 2013. Due to the parameters of the analysis as well as data limitations, this report focuses on USG funding that the U.S. Agency for International Development (USAID) received through direct appropriations as well as through interagency transfers (e.g., from the Department of State1), which together account for the majority of U.S. bilateral global health spending.2 Specifically, its findings are based on KFF analysis of data on funding disbursed by USAID in FY 2013 to U.S.-based non-profits implementing USG global health activities, which was downloaded from the U.S. government’s Foreign Assistance Dashboard (www.ForeignAssistance.gov); other sources of data included organizations’ websites, which were used to confirm organizations’ non-profit statuses as well as the U.S. locations of their headquarters/main U.S. offices implementing specific global health activities. (See Box 1 for the definition of U.S.-based NGOs utilized in the analysis and Appendix A for a detailed methodology.) In addition to identifying these NGOs, this report examines their funding levels, program areas, and geographic focus.

For the purposes of this analysis, to be eligible to be included, an organization had to meet the following definition of a U.S.-based NGO: a non-profit that is independent of the U.S. government and any other government, based in the United States (through either its headquarters or a main U.S. office that had been awarded a USG global health project), and not a university/college, a hospital, or a foundation that solely supports a U.S. government department/agency, hospital, or university. Non-profits excluded under this definition include, for example, the CDC Foundation and the Pan American Health Organization. This definition was informed by the USAID definition of private voluntary organizations (PVOs),3 which guides a USAID registration process for NGOs.

Most funding provided to NGOs was directed to a small number of organizations. Twenty NGOs accounted for the vast majority of funding (about 91% or $2.1 billion) (see Figure 3). Among these, 11 received more than more than $50 million in net disbursements each, collectively accounting for more than three-quarters of all funding (about 79% or $1.8 billion). These were the Partnership for Supply Chain Management, FHI Development 360, Management Sciences for Health (MSH), Jhpiego, Population Services International (PSI), PATH, RTI International, JSI Research & Training Institute, PACT, IntraHealth International, and Pathfinder International. On the other end of the funding range, 74 NGOs received less than $1 million each. 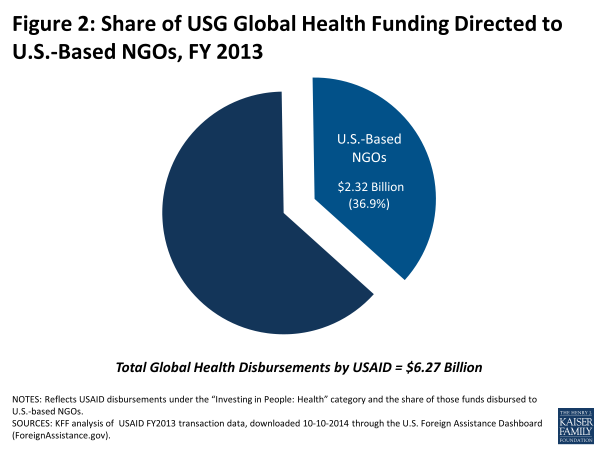 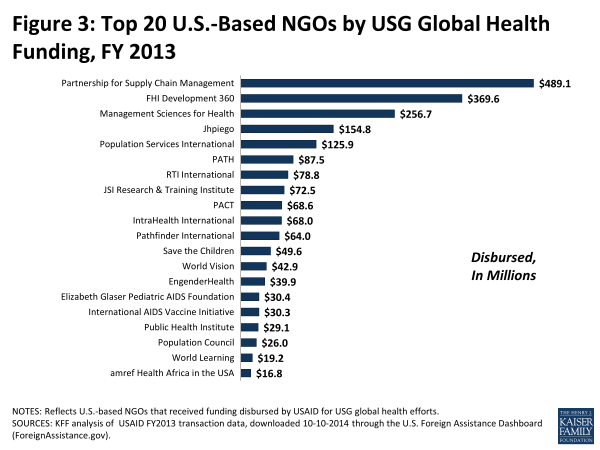 The program area involving the greatest numbers of NGOs is HIV, followed by MNCH. As Figure 4 shows, 75 NGOs worked on HIV and 62 on MNCH efforts, followed by FP/RH (43), water supply and sanitation (40), malaria (34), nutrition (34), TB (22), and other public health threats (13). Only PIOET efforts involved less than ten NGOs, with 7 NGOs carrying out these efforts. The greatest proportion of funding to NGOs was for HIV efforts, followed by FP/RH and MNCH. (See Appendix B for a listing of NGOs by program area.) 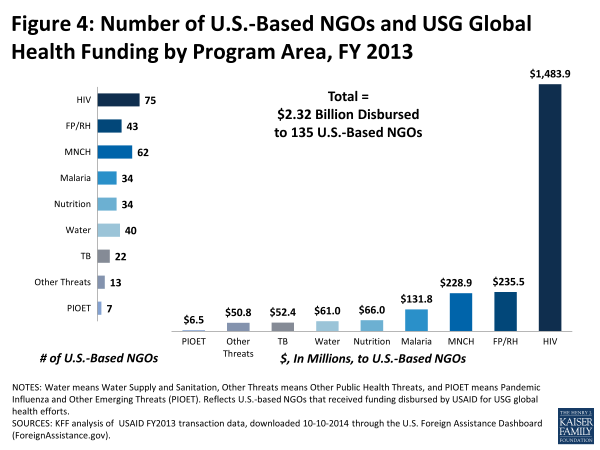 Stateside, NGO operations are based across the U.S. but most often in the Northeast and West Coast regions. The headquarters/main U.S. offices of these NGOs are in half (25) of all U.S. states and in the District of Columbia (DC). The greatest number are in DC (25), followed by New York (21), Maryland (16), California (12), Virginia (10), Massachusetts (9), North Carolina (5), and Washington (4) — locations proximate to major USG, international, and multilateral organizations that address global health, universities with significant global health programs, and/or other major funders of global health efforts (e.g., the Gates Foundation, which is located in Washington state).

Nearly 80 NGOs provided “worldwide” support or focused on activities with global purposes. In FY 2013, 78 NGOs received funding for “worldwide” USG global health efforts; 30 received only “worldwide” funding, with the rest also receiving funding for country-and region-specific efforts. About a third of funding provided to NGOs ($0.74 billion) is directed to such efforts.  “Worldwide” activities may include providing technical assistance to field missions as part of certain project awards and carrying out globally-focused activities; for example, in FY 2013, funds for worldwide efforts were disbursed for field support efforts related to fistula prevention and repair led by EngenderHealth and for vaccine research and development efforts carried out by the International AIDS Vaccine Initiative. 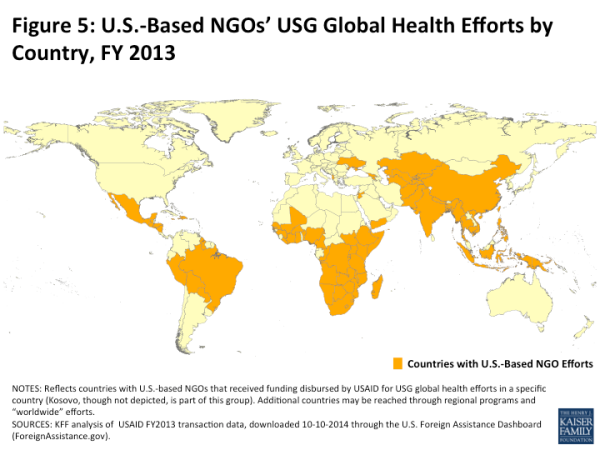 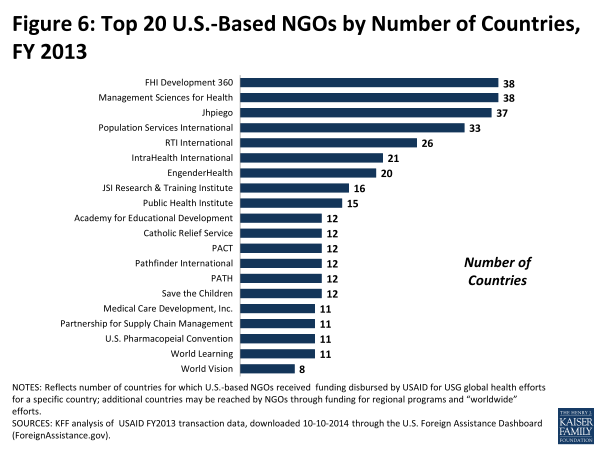 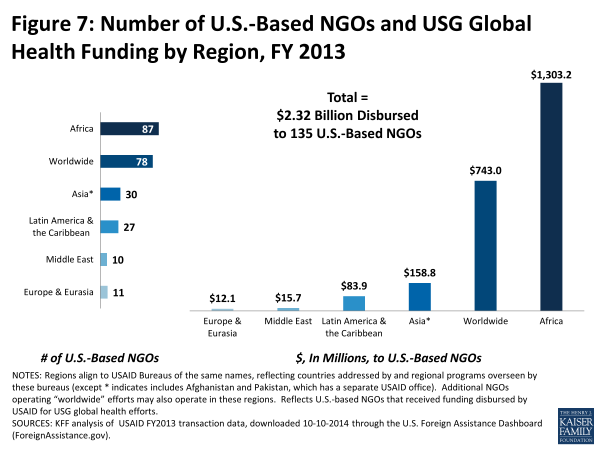 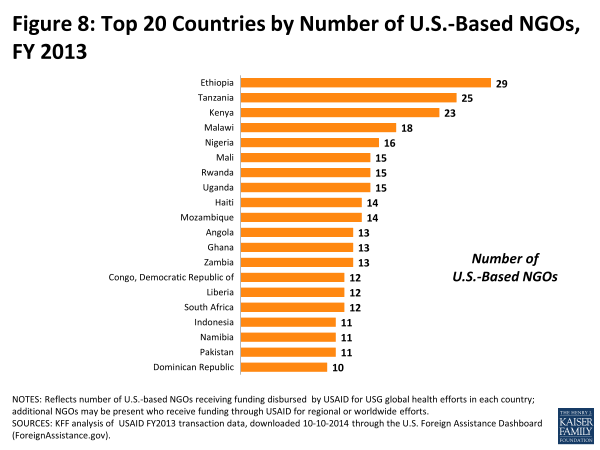 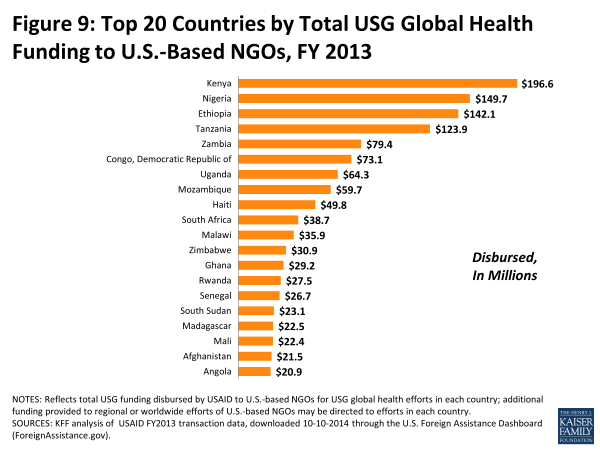 As the findings of this report have shown, U.S.-based NGOs play an important role in carrying out USG global health efforts, accounting for a third of USAID global health disbursements in FY 2013. Greater understanding of the extent of NGO engagement in these efforts can be elucidated by further analysis, as data on USG global health funding for U.S.-based NGOs become increasingly available publicly and as the quality and clarity of these data improve. The USG has taken important steps in recent years to make funding and project data more available and easily accessible, but further attention is still required to fill in gaps in data – particularly with regard to USG funding sources beyond USAID – and to ensure the quality and completeness of existing USG data resources. Moreover, such data are critical to evaluating whether investments in NGOs further achievement of USG global health goals. Still, the findings of this report suggest that the significant role of NGOs will be important to consider in understanding USG global health efforts going forward.