Medicaid is the nation’s primary public health insurance program for people with low incomes covering over 70 million Americans. The Medicaid program is jointly-funded by states and the federal government; the federal government guarantees matching funds to states for qualifying Medicaid expenditures.  States are guaranteed at least $1 in federal matching funds for every $1 they spend of their own funds on the program with poorer states receiving more. (For more on Medicaid financing and its role in state budgets, see this resource.) Participation in Medicaid in voluntary, but states that participate must design and administer their own Medicaid programs within federal requirements. Within these parameters, states can choose to cover optional groups and benefits and have substantial discretion to determine how care is delivered as well as how and how much providers are paid. Medicaid programs have also continued to evolve over time, responding to new options made available through federal law, new technology and changes in the health care marketplace.

States have responded to program options in different ways, reflecting wide variation across states in their health care marketplace, culture, traditions, priorities and fiscal capacity, and as a result program variation across the states is significant. To help capture these changes, the Kaiser Commission on Medicaid and the Uninsured and Health Management Associates have conducted annual in-depth surveys for the past 15 years of changes taking place in Medicaid programs across the country. While the survey has changed over time to capture emerging policy issues, the reports have consistently captured information about Medicaid in five key areas:

This brief reviews trends across different policy areas and highlights where federal changes imposed new requirements. Because all states have to comply with new requirements (like the ACA enrollment simplifications) these changes are not counted as state policy actions.

Additional detail is included in the Appendix; state level data can be accessed in the following data collection.

State Medicaid programs are affected by a changes in economic conditions and federal policy among other factors. During the period of this survey, two factors in particular have had widespread effects – the Great Recession and the Affordable Care Act.

During the Great Recession, states faced historic declines in state tax revenue. (Exhibit 1) In response, Congress has twice passed temporary increases to the FMAP rates to help support states during economic downturns, most recently in 2009 as part of the American Recovery and Reinvestment Act (ARRA.)  The ARRA-enhanced match rates was the largest source of federal fiscal relief to states, providing over $100 billion in additional federal funds over 11 quarters, ending in June 2011.1 Event with this fiscal relief, the effects of the recession on state budgets and Medicaid programs lingered long after the recession was officially over. 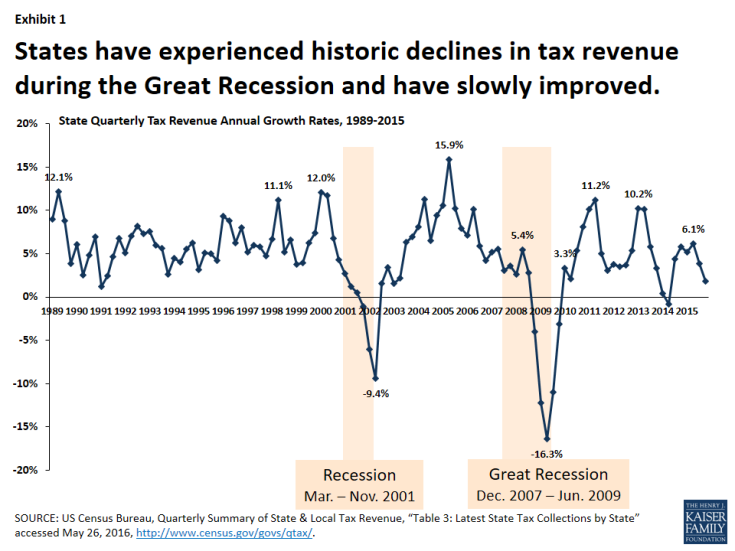 Exhibit 1: States have experienced historic declines in tax revenue during the Great Recession and have slowly improved.

The Affordable Care Act (ACA) made several changes to the Medicaid program. Some of the most significant changes related to eligibility and application/renewal policy. Specifically, the ACA expanded Medicaid eligibility to nearly all non-elderly adults with income at or below 138% of the federal poverty level (FPL) – about $16,245 for an individual in 2015. This expansion established a new coverage pathway for millions of uninsured adults who were previously excluded from Medicaid, beginning January 1, 2014. The law also provided for 100% federal funding of the expansion through 2016, with the federal match rate declining gradually from 95% in 2017, 94% in 2018, 93% in 2019 and 90% in 2020 and all future years. However, the Supreme Court ruling on the ACA in June 2012 effectively made the Medicaid expansion optional for states. The ACA required all states to make changes to streamline and simplify the enrollment process, providing no wrong door to coverage between Medicaid, CHIP and the Marketplace that represent historic change for the program. The ACA also provided new options and resources to support state efforts in delivery system and payment reform as well as serve more people in the community-based settings rather than in institutions.