California's Uninsured on the Eve of ACA Open Enrollment

The fourth group of California’s uninsured – a group that we have not considered at any length in the report thus far – is the group that, because of their immigration status, will not be eligible for Medi-Cal or exchange coverage in 2014. Looking at California’s uninsured population as a whole—that is, including those who will be eligible for the ACA’s coverage benefits and those who will not – the survey suggests that about a fifth of the uninsured are undocumented immigrants and would be in this category. Under current law, undocumented immigrants will not be eligible to buy coverage through Covered California or to be covered by the Medi-Cal program.1 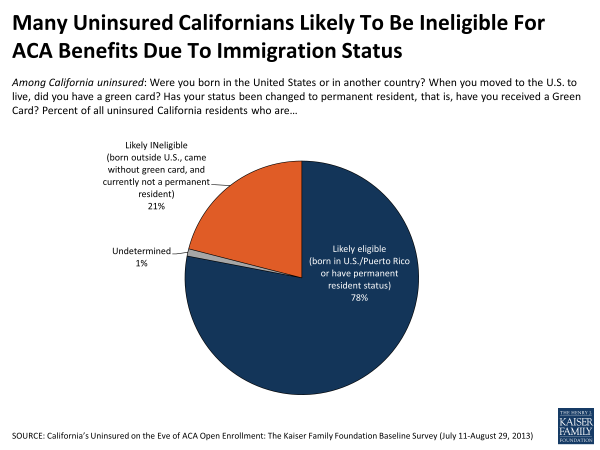 As a brief portrait: Nine in ten among the group currently ineligible due to immigration status describe themselves as Hispanic, six in ten (59 percent) are employed and a little over four in ten are married. Over half say they have been in the U.S. for more than ten years. They are more likely than the rest of the uninsured population to be parents of a dependent child and to have lower levels of education.

In their health care needs, however, they look much like the rest of the state’s uninsured population. Overall, the large majority of the undocumented uninsured – roughly eight in ten – report finding it difficult to pay for health care. And eight in ten say they feel the need for health insurance, most to cover the risk of an unforeseen illness or accident.

Without the benefit of insurance, many are skipping care they need because they can’t afford it. Overall, 46 percent of uninsured undocumented immigrants say they have gone without needed health care, a significant share, though a smaller proportion than among the rest of the uninsured population (where 64 percent report having skipped needed care). 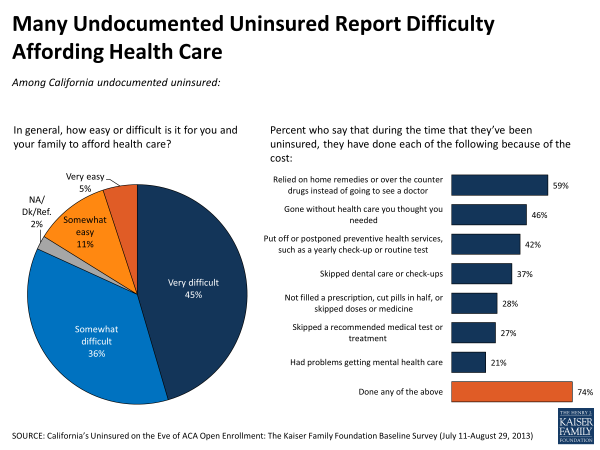 But worry about the ability to pay bills in the case of a severe and unexpected illness is high in this group, with 86 percent saying they are “very worried”. And they stand out as particularly concerned about being able to find a doctor that would treat them if they needed one: 68 percent are “very worried”, nearly 30 percentage points higher than among other uninsured Californians. 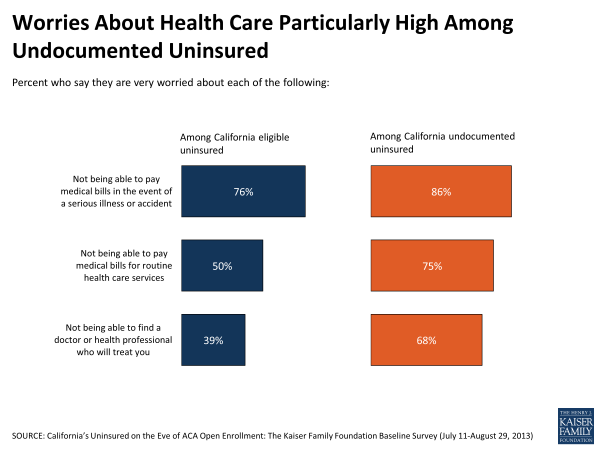 The undocumented uninsured also stand out as a group with very positive views of the ACA, despite the fact that they are not covered by the law, and many have what would seem to be misplaced expectations of receiving help under the law. Among this group, 63 percent have a favorable view of the ACA, and four in ten say that they expect to see improved access to care and insurance under the law. On the other hand, between four and five in ten expect things will stay the same for them.

More specifically in terms of perceived benefits, about half (49 percent) of the undocumented uninsured think they may be eligible to get insurance through Medi-Cal as a result of the ACA, and 43 percent expect they will be eligible to shop for health insurance through Covered California.  These findings suggest there is a group in this population that could be left feeling disappointed and potentially frustrated come 2014. 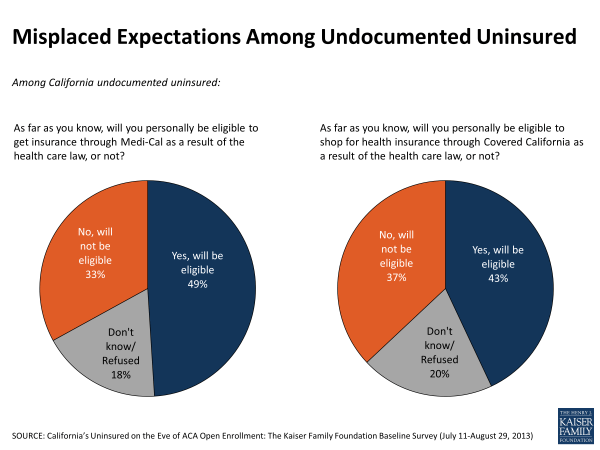 Section 2: The uninsured experience, pre-ACA Section 4: What comes next