California's Uninsured on the Eve of ACA Open Enrollment

Who are the uninsured in California?

In this section of the report, we look at a snapshot of the uninsured population in the state, with the goal of better understanding their upcoming interactions with the ACA’s coverage expansion by better understanding who they are and what challenges they currently face in getting and paying for health care services.

Most lack financial security, half say “very difficult” to pay for health care

Perhaps the most striking element of California’s uninsured population is the extent to which they, even more than the average American living through an economic downturn, are struggling to stay financially afloat. Nearly all the eligible uninsured –roughly nine in ten – have family incomes under 400 percent of the FPL (about $94,000 a year for a family of four), and nearly half are at or below 138 percent of FPL, representing an annual income of roughly $32,000 for a family of four. 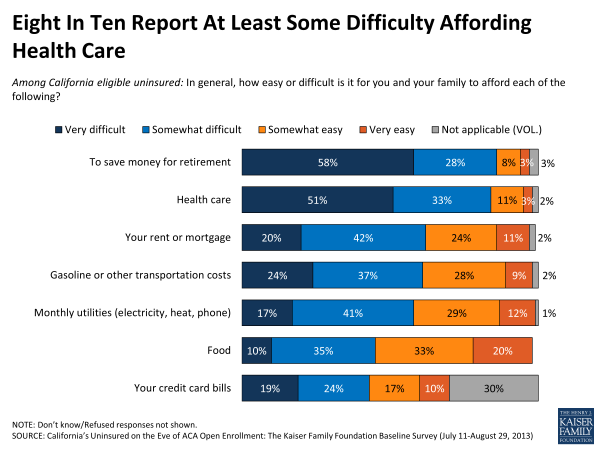 And they feel it. A majority (57 percent) describe themselves as financially insecure, including one in four (25 percent) who say they feel “very insecure.” More than eight in ten (84 percent) report at least some difficulty affording health care, including half who find it “very difficult”. Roughly six in ten find it difficult to pay for gas and other transportation costs, their monthly utilities, and their rent or mortgage. More than four in ten have at least some difficulty affording food.

Four in ten of California’s uninsured do not have a regular source of care; when they do, most common location is a health clinic rather than a doctor’s office

More than four in ten of the eligible uninsured (44 percent) say they do not have a regular place to go to when they are sick or need advice about their health.  For those who do have a usual source of care, most common (30 percent overall) is to visit a clinic or health center. Smaller groups use a doctor’s office (11 percent) or even an emergency room (7 percent) or urgent care center (4 percent).

Overall, about two-thirds (68 percent) of California’s eligible uninsured say they or their spouse are working. The majority (58 percent) are employed themselves, with about one in ten overall (12 percent) working more than one job. Overall 20 percent say they are unemployed and looking for work, 7 percent call themselves homemakers, and 6 percent are students.

But most of the state’s uninsured don’t have a bulwark of educational resources to draw on in terms of upward employment mobility: half have no education past high school, and just 14 percent have completed a college degree.

Uninsured have tangential relationship to financial institutions: majority have no credit card, three in ten have no savings or checking account

Though the majority of the state’s uninsured are employed, incomes among this population are low and financial resources are limited. More than half of California’s eligible uninsured report they do not have a credit card, and three in ten do not have a bank savings or checking account. In this latter group, most say they pay their bills in cash, though some used money orders or prepaid cards. In late August, the Obama Administration issued rules requiring that the ACA’s health insurance exchanges accept prepaid debit cards for payment from those that do not have a relationship with a bank.1 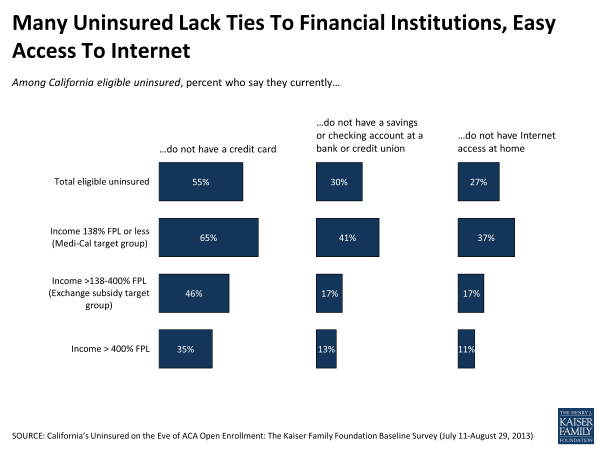 Like the state as a whole, eligible uninsured a racial and ethnic mix

California’s eligible uninsured are a racial and ethnic melting pot, like the state in which they reside. The two largest groups: 45 percent identify as Hispanic, 32 percent are non-Hispanic White. A third say they were born outside of the United States. Among Hispanics in the eligible uninsured group, more than four in ten (44 percent) prefer to communicate in Spanish rather than English, a finding particularly relevant in light of the rollout of the coverage expansion effort.

The current picture: Many uninsured Californians missing out on needed health care

Many say health needs not being well met, have gone without needed care due to cost

In the summer of 2013, as the Covered California marketplace gears up for its October debut and the state Medi-Cal offices prepare for an influx of potential new customers, roughly half (49 percent) of the eligible uninsured in California say that their health needs are not being well met at the present moment. On the flip side, half say that despite their lack of coverage, they have found a way to meet their health needs at least “somewhat well”.

Many of the state’s uninsured react to their lack of coverage by not seeking out the health care they think they need. More than six in ten (64 percent) say that they’ve gone without needed health care because of the cost during the time they’ve been uninsured.  Roughly seven in ten have report skipping dental care, and a similar share say they have put off preventive care they thought they needed. Half say they have skipped a recommended test or treatment. Four in ten report cutting corners on needed medication. 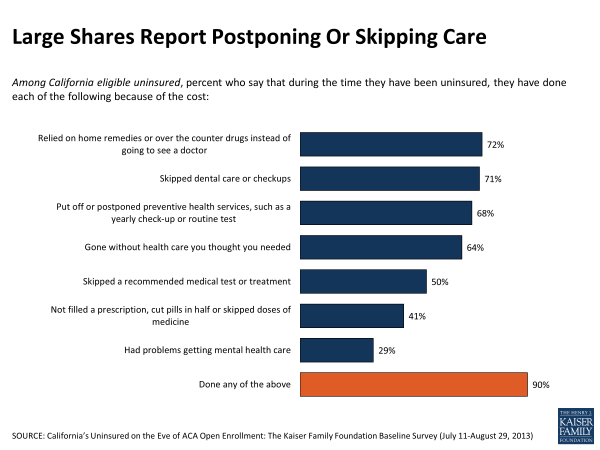 There is a consistent gender gap in these findings: Uninsured women are more likely to report putting off care due to cost across a variety of categories.  For example, 74 percent of women say they have gone without health care they needed, compared to 56 percent of men.

Not surprisingly, those with more health needs – for example, those who say they are in fair or poor health – are more likely to say health needs have come up that they have not been able to fill because of the cost.

Overall, two in three among the eligible uninsured currently worry about being able to find a doctor to treat them, with 39 percent reporting they are “very worried”. Hispanics and Blacks are significantly more likely than whites to say they worry about finding a practitioner, those with lower incomes are more likely to worry than those in households making more money, and women are more likely to be concerned about this than men.

Meanwhile, a third of the eligible uninsured say they are in less than good health, including higher shares of those in the lowest income groups. And just over four in ten (44 percent) overall say at least one person in their household would be considered to have a pre-existing condition of some sort.

Medical bills, problems paying, worries about being able to pay

Four in ten had trouble paying medical bills in past year, many with severe consequences

Over the course of the past year, four in ten (41 percent) uninsured Californians say they had trouble paying medical bills, with roughly half that group (or 23 percent of the eligible uninsured overall) reporting that these bills had a ‘major impact’ on their family.

Blacks (59 percent) and those in fair or poor health (55 percent) are the most likely to report having trouble paying their medical bills, and there is a gender gap with women 12 percentage points more likely than men to report this kind of financial trouble. Perhaps surprisingly, there is little difference across age groups here, with younger people just as likely as older to say they’ve had trouble paying for care.

Among the negative impacts of incurring these high medical bills: 21 percent have spent less on food; 20 percent borrowed money from family and friends; 20 percent used up all or most of savings; 19 percent have been contacted by collection agency; 13 percent skipped a utility payment; and 9 percent skipped a rent or mortgage payment. Overall, about one in three of the state’s eligible uninsured (36 percent) have faced at least one of these serious consequences as a result of health care expenses. 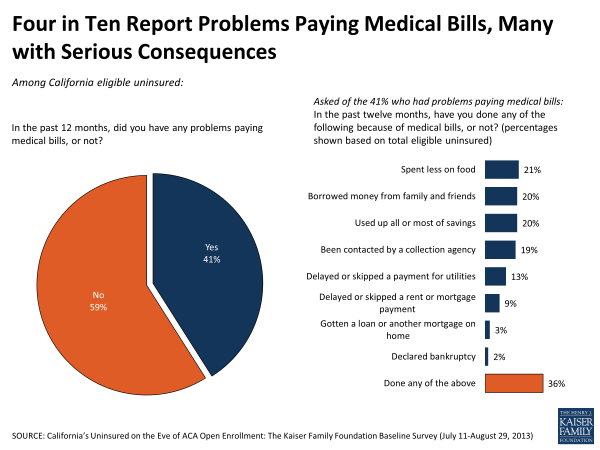 There is a widespread concern among the uninsured about being able to pay medical bills in the event of a serious illness. Three in four are “very” worried about this, overall more than nine in ten worry at least a little about it.  This concern ranks at the top of a list of six common financial worries. 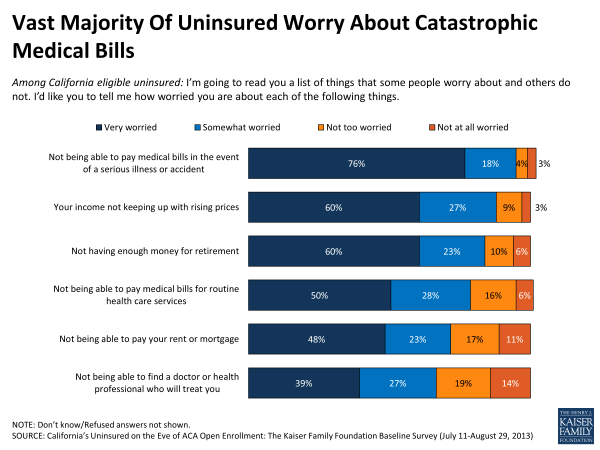 About half say they are “very worried” about being able to pay for their routine health care expenses, including a higher share of women (57 percent) than men (44 percent).