A Look at Section 1115 Medicaid Demonstration Waivers Under the ACA: A Focus on Childless Adults

Appendix A: Overview of section 1115 waiver Authority, financing, and applications

Section 1115 Medicaid Waiver Authority. Section 1115 of the Social Security Act (SSA) gives the Secretary of Health and Human Services (HHS) authority to waive provisions of major health and welfare programs authorized under the Act, including certain Medicaid requirements, and to allow a state to use federal Medicaid funds in ways that are not otherwise allowed under federal rules. This authority is provided for “experimental, pilot, or demonstration” projects which, in the view of the Secretary, are “likely to assist in promoting the objectives of” the program. Although the Secretary’s waiver authority is broad, it is not unlimited. There are some program elements the Secretary does not have authority to waive, such as the federal matching payment formula. States have obtained “comprehensive” Section 1115 waivers that make broad changes in Medicaid eligibility, benefits and cost sharing, and provider payments. There also are narrower Section 1115 waivers that focus on specific services, such as family planning services, or populations, such as people with HIV.1

Section 1115 Waiver Financing. Although not required by statute or regulation, under longstanding administrative policy, Section 1115 waivers have been required to be budget neutral to the federal government. This means that federal spending under a state’s waiver must not exceed projected federal spending for that state without the waiver. The federal government establishes budget neutrality by placing a cap on federal matching funds over the life of a waiver, putting the state at risk for all waiver costs that exceed the cap. To date, most Section 1115 waivers have utilized a per capita cap for groups covered under the waiver, which puts the state at risk for higher than anticipated per person costs but not higher than expected enrollment.  However, a June 2013 Government Accountability Office (GAO) report found that budget neutrality is not always met, citing for example four states (Arizona, Indiana, Rhode Island, and Texas) in which HHS approved higher-than-benchmark spending limits.2 Section 1115 waivers do not change the federal Medicaid matching payment structure. A state must pay its share of costs for services and populations allowable under the waiver, as determined by the Medicaid matching rate formula in federal law. The federal government then matches the state’s expenditures up to the established budget neutrality cap.

Section 1115 Waiver Approval Process. Waivers are subject to approval by the HHS Secretary. The process officially begins when a state submits an application to the CMS, although states generally have discussions with CMS or submit a concept paper before submitting an official application. Significant negotiation about aspects of the waiver may take place between the state and HHS throughout the waiver approval process. Section 1115 waivers generally are approved for an initial five-year period. At the end of the initial approval period, waiver extensions may be approved, typically for a three-year period. Some waivers have been extended repeatedly, allowing them to remain in place for many years. In addition to federal approval, some states require authorizing legislation for waivers. In response to concerns about the lack of public input and transparency in the Section 1115 waiver approval process, the ACA established new provisions designed to ensure meaningful opportunities for public input into the Section 1115 waiver process, including public hearings as well as notice and comment periods at the state and federal levels. These regulations went into effect April 27, 2012 and apply to all new Section 1115 Medicaid and CHIP waiver proposals as well as extensions of existing waivers; they do not apply to waiver amendments.3

Appendix B: Waivers for Childless Adults: Income Eligibility Limits as a Percent of the FPL, Waiver Timing and Medicaid Expansion Status 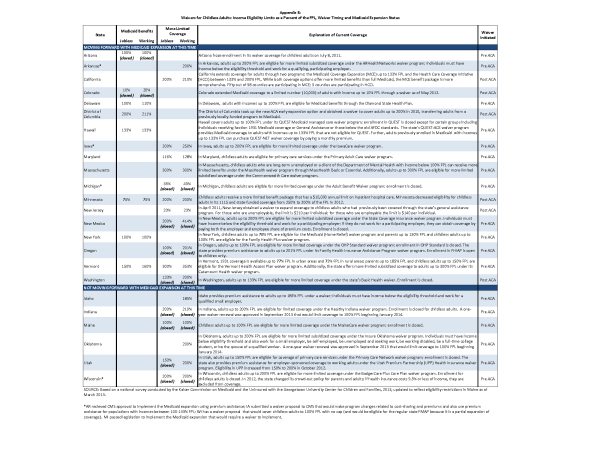