In 2016, beneficiaries across the country continue to have a substantial number of Part D plan choices. 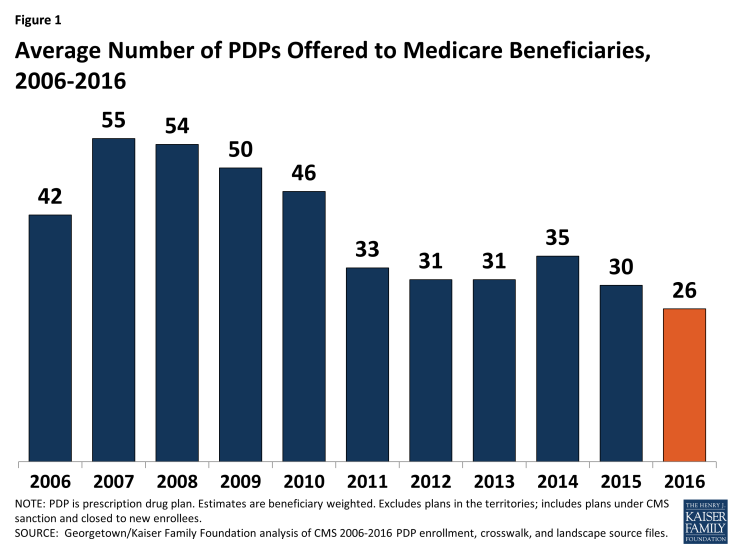 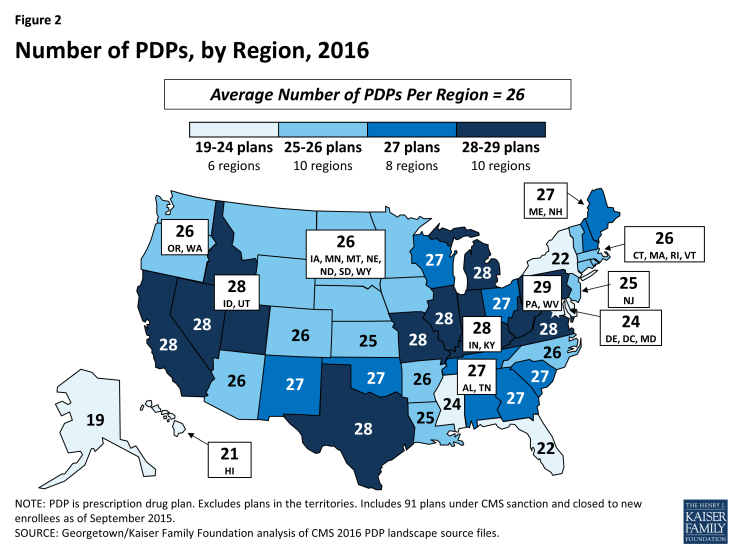 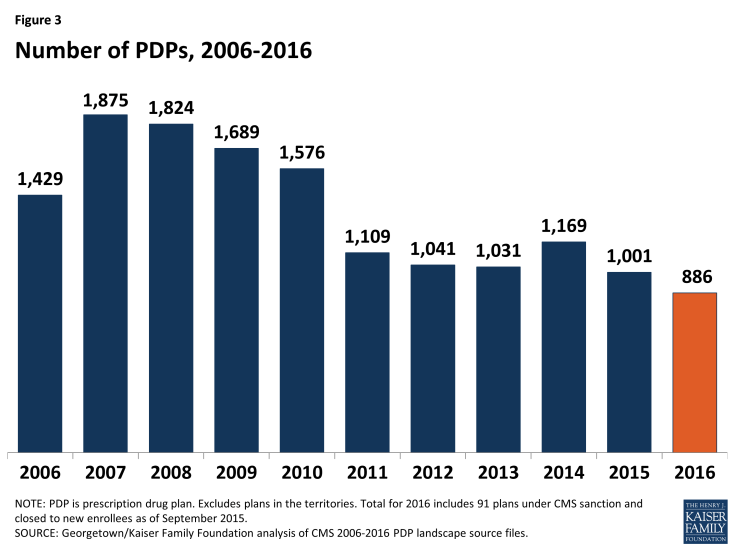 For 2016, 31 new PDPs are entering the market, and 146 PDPs are exiting the program.3 (See Appendix 2 for more detail on market dynamics.)

The national average monthly PDP premium is expected to increase for 2016, marking a significant departure from recent years when premiums were essentially flat. Even if a number of beneficiaries switch or are reassigned to lower-premium plans, effective in January 2016, the average premium increase for 2016 is likely to be the largest amount in any year since 2009. 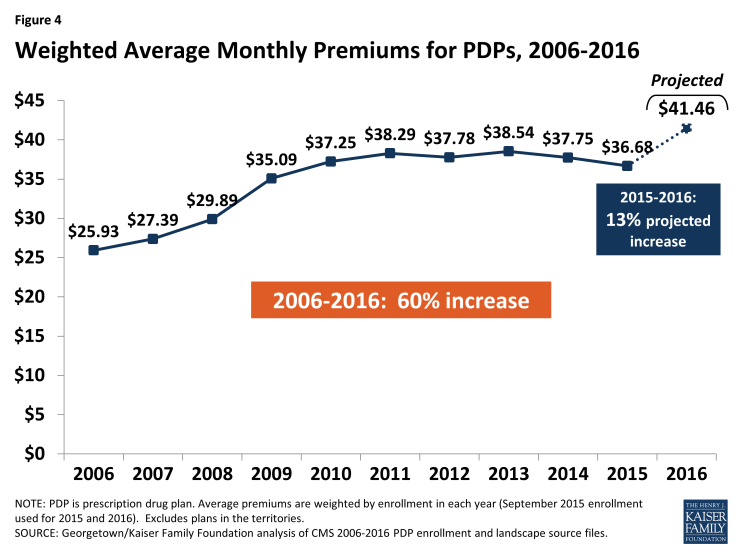 A growing share of PDP enrollees are paying premiums that are well above the national average. 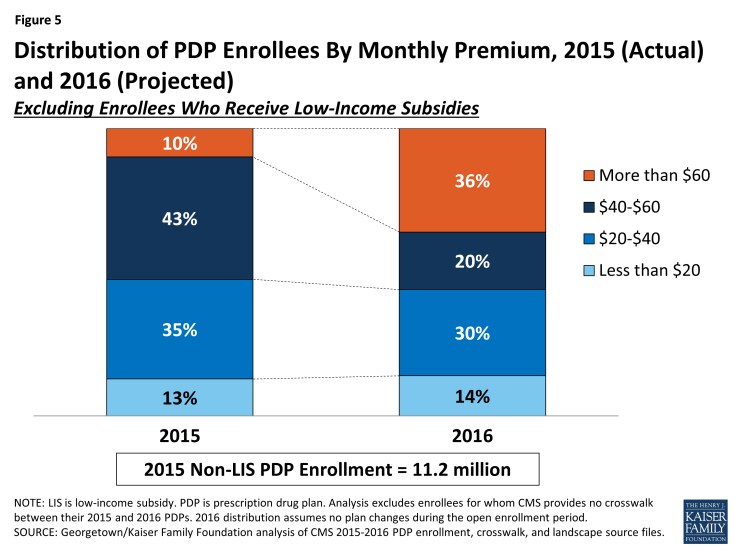 CMS reported that the average premium for standard Part D coverage offered by PDPs and Medicare Advantage drug plans will “remain stable” at an estimated $32.50 in 2016.7 The higher premium reported here is based on PDPs only, including PDPs offering both basic and enhanced coverage. Enhanced plans typically have higher premiums than basic PDPs. Our estimate does not assume any voluntary switches by beneficiaries and reassignments by CMS of Low-Income Subsidy enrollees to different plans, nor do we make any assumptions about plan choices made by new enrollees in 2016.

Underneath these national trends, premium changes for individual PDPs from 2015 to 2016 vary widely (Figure 6). 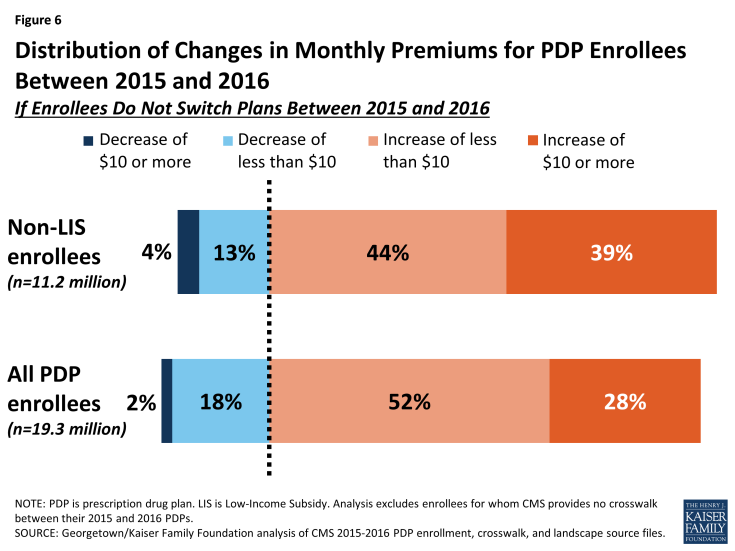 Figure 6: Distribution of Changes in Monthly Premiums for PDP Enrollees Between 2015 and 2016

Premium Changes for PDPs with the Most Enrollees

Changes to premiums from 2015 to 2016, averaged across regions and weighted by 2015 enrollment, vary widely across some of the most popular PDPs (Figure 7). These variations reflect factors such as higher premiums in older plans and substantial geographic variations.8 Although variation in benefits is also a factor, premium variation persists even among PDPs that offer benefits actuarially equivalent to the basic benefit defined in law. 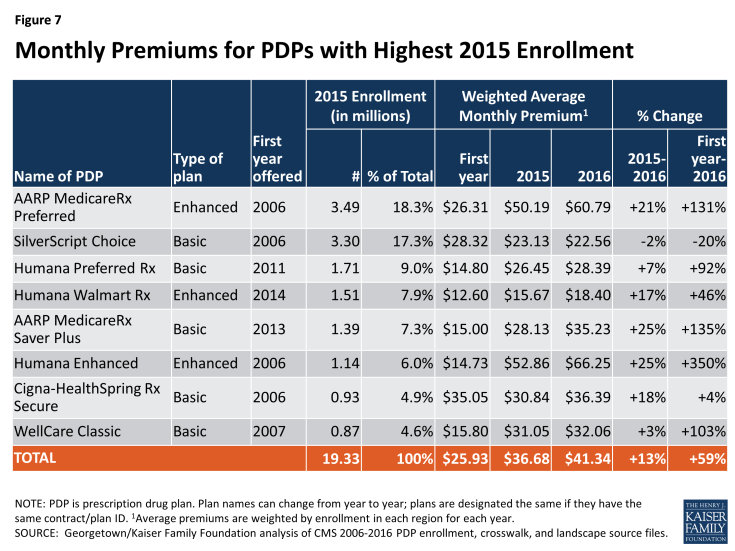 Enrollees in some of the most popular PDPs could see bigger or smaller premium increases than the national average, depending on the region where they live. 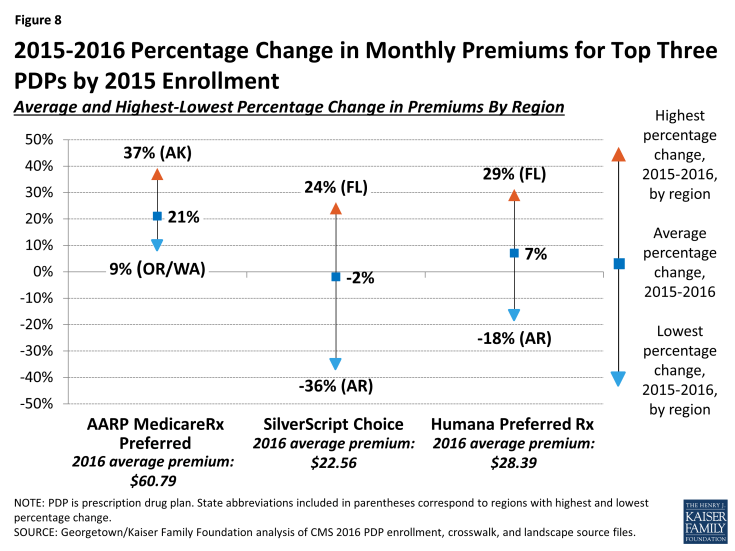 Monthly premiums for the most popular PDPs available since the start of the Part D program in 2006 have changed in different ways.

Average PDP monthly premiums, weighted by 2015 enrollment, will vary widely in 2016 across regions, along with the change in premiums from 2015 to 2016. 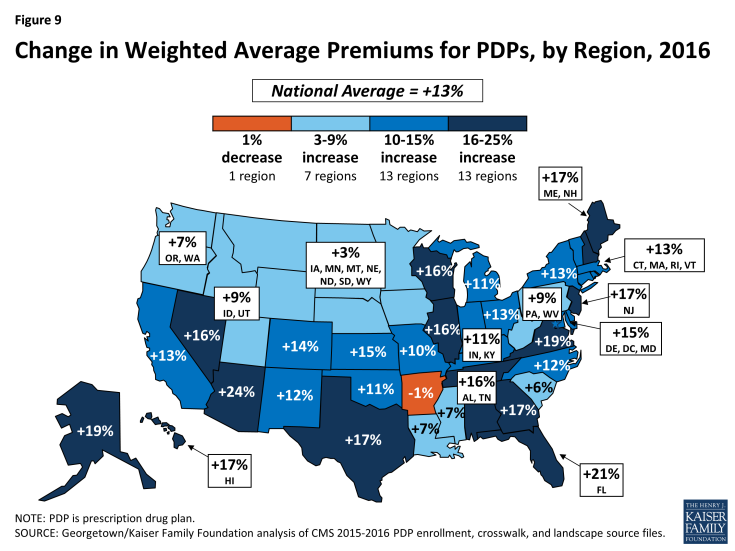 Figure 9: Change in Weighted Average Premiums for PDPs, by Region, 2016

Average and plan-level premium amounts do not take into account the income-related Part D premium that took effect in 2011 for Part D enrollees with higher annual incomes ($85,000/individual and $170,000/couple). Established by the Affordable Care Act of 2010 (ACA), the income-related Part D premium requires higher-income enrollees to make an additional payment to the government for Part D coverage, regardless of the plan selected. In 2016, the monthly surcharge will range from $12.70 to $72.90, depending on income, in addition to the monthly premium payment for the specific Part D plan.9 Nearly 6 percent of Part D enrollees are expected to make these additional payments in 2016.10 Under current law, the income thresholds are not indexed to increase annually until 2020, meaning that by 2019, a projected 8 percent of Part D enrollees will pay income-related premiums.

In 2016, for the second year in a row, all Part D PDPs will offer an alternative benefit design to the defined standard benefit, which has a $360 deductible in 2016 and 25 percent coinsurance for all covered drugs. Some plans modify or eliminate the deductible, and all PDPs use some type of varying cost-sharing tiers for covered generic and brand-name drugs.

The standard (maximum) Part D deductible is increasing by $40 in 2016, the largest one-year increase since the program began. It is adjusted each year by a statutory formula based on the annual percentage increase in average per capita aggregate expenditures for covered Part D drugs. Other amounts for the standard benefit design parameters are increasing as well (see Appendix 3 for the 2006-2016 standard benefit amounts). 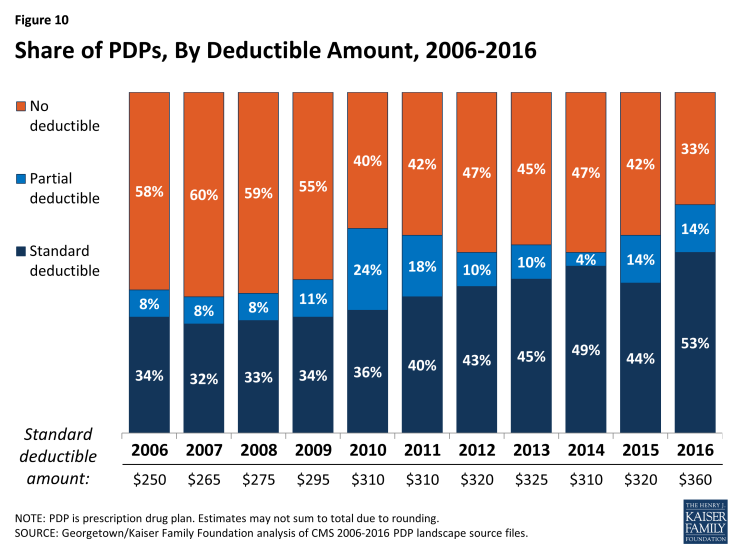 The coverage gap, or “doughnut hole,” is gradually becoming a less salient feature of the Part D benefit design, as a result of changes made by the ACA. It will be fully eliminated as of 2020, when beneficiaries will only be responsible for 25 percent of their total drug costs in the gap. Since 2011, any beneficiary with drug costs high enough to reach the gap has paid less than the full cost of the price of their drugs. In 2016, manufacturer prices for brand-name drugs purchased in the gap will be discounted by 50 percent, with plans paying an additional 5 percent of the cost and enrollees paying the remaining 45 percent. Plans will pay 42 percent of the cost for generic drugs in the gap, with enrollees paying 58 percent. In 2016, the coverage gap begins after an enrollee incurs $2,960 in total drug spending and ends after an enrollee has spent a total of $4,850 out of pocket (or $7,515 in total drug costs under the standard benefit).12 At that point, catastrophic coverage begins, where enrollees generally pay only 5 percent of drug costs.

Most Part D plans will offer no gap coverage in 2016 beyond what is required by the ACA under the standard benefit. With all Part D enrollees now getting coverage for a share of their costs in the gap, the value of additional gap coverage offered by plans will become lower each year until 2020, when the gap is fully closed.

The cost implications of tiered pharmacy networks for enrollees vary across PDPs.

In 2016, the total availability of premium-free (benchmark) plans—that is, PDPs available for no monthly premium to Low-Income Subsidy (LIS) enrollees—will be at its lowest level in the program’s ten years (Figure 11; Appendix 1, Table A3). 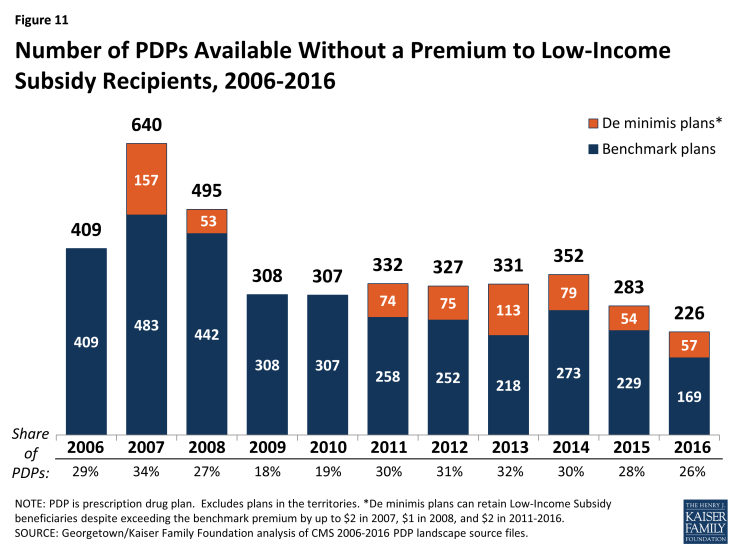 Figure 11: Number of PDPs Available Without a Premium to Low-Income Subsidy Recipients, 2006-2016

Availability of Benchmark Plans by Region 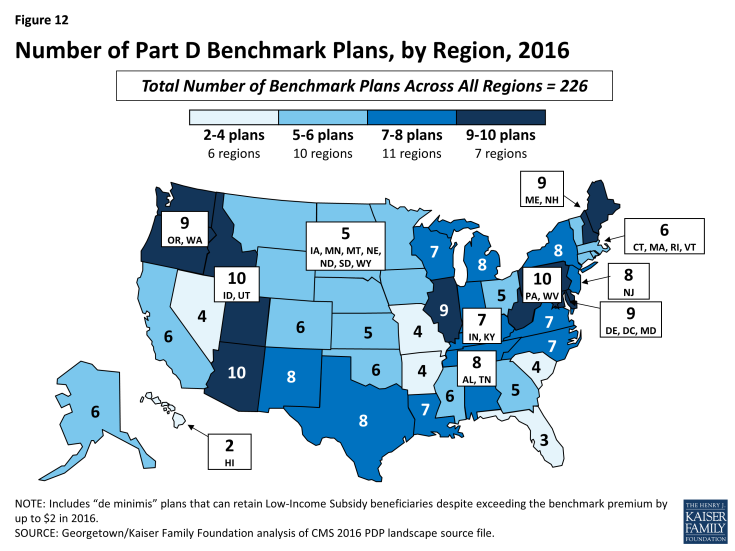 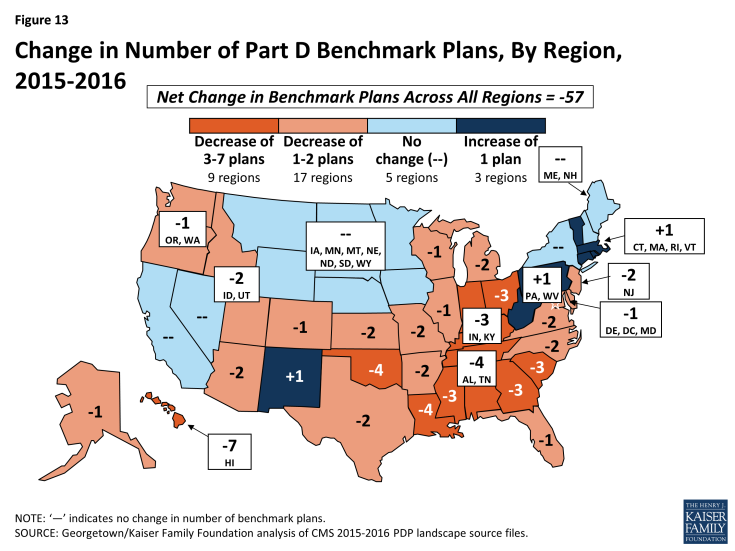 About 1.9 million people—about one in four LIS beneficiaries (24 percent)—are enrolled in PDPs in 2015 that will not qualify as benchmark plans in 2016 (Figure 14). 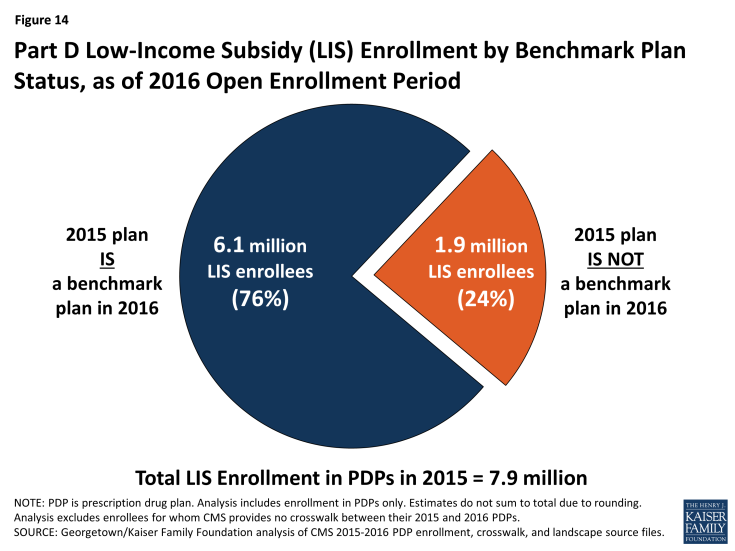 The number of premium-free plans for LIS enrollees offered by the major Part D organizations has fluctuated substantially over the years. 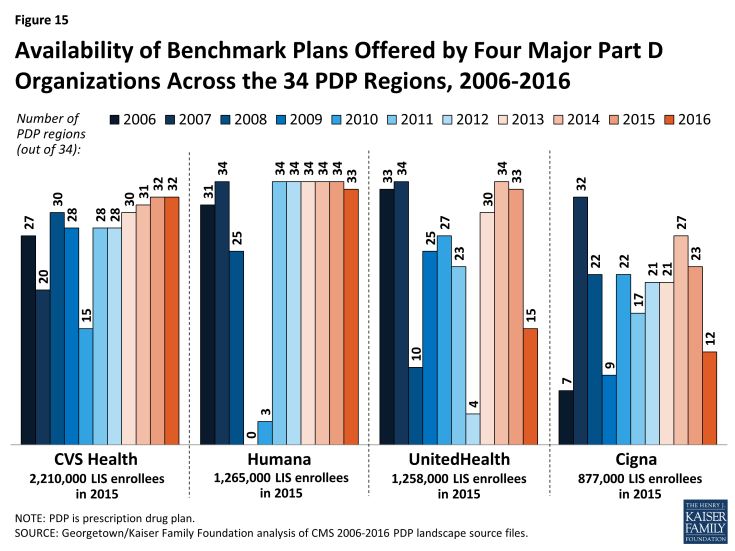 This review of the Part D plan landscape for 2016 and changes over time indicates that most PDP enrollees can expect to see some changes in their prescription drug coverage and costs in 2016. For most enrollees, premiums are projected to be higher in 2016 than in 2015, and many will also see higher deductibles and more cost-sharing tiers with coinsurance. LIS enrollees will have fewer PDP options available at a zero premium, and many be reassigned to different plans or will need to switch to a different plan to continue without a premium. Beneficiaries have options during open enrollment to select plans that better meet their needs, including plans with lower premiums. Although premiums tend to be the most visible feature when comparing plans, beneficiaries need to consider other factors, especially whether their drugs are on a plan’s formulary, whether their usual pharmacy offers preferred cost sharing, and the total out-of-pocket costs (including both premiums, deductibles, and cost sharing) for coverage of their prescription drug needs.

Changes in Part D plan costs and benefit design from one year to the next have been a defining featuring of the program since its beginning. The reduced number of PDPs for 2016 could make the process of comparing and reviewing plan options a little easier for beneficiaries to undertake during the open enrollment period, but the more than two dozen PDP options in each region may still discourage many from reevaluating their choices. While the annual enrollment period is the best opportunity for people on Medicare to evaluate their plan options and make changes, our analysis of plan switching by PDP enrollees not receiving the LIS showed that about 87 percent stayed in the same plan in annual enrollment periods between 2006 and 2010.16 Even when they were projected to face large premium increases, a majority of PDP enrollees stayed in the same plan from one year to the next. Among LIS enrollees, although many are reassigned each year to new plans by CMS, few (14 percent) of those not eligible for reassignment by CMS and projected to pay a premium switched to new plans in 2010.17 Finding ways to get more Part D enrollees engaged in comparing and reviewing plans and making changes that could save them money remains an ongoing challenge for CMS and policymakers.