In total, 2,034 Medicare Advantage plans will be available nationwide for individual enrollment in 2017, a number that has been relatively stable since 2011 (Figure 1).  Among the plans that were available in 2016, 238 will be exiting the Medicare Advantage market, and 271 plans will be offered for the first time (Table A1).  While virtually every state will see some change in the number of plans, most of the plans exiting the market in 2017 attracted relatively few enrollees in 2016. Just under 3 percent of all Medicare Advantage enrollees in 2016, 414,710 beneficiaries, will need to choose a new plan in 2017 because their plan exited. 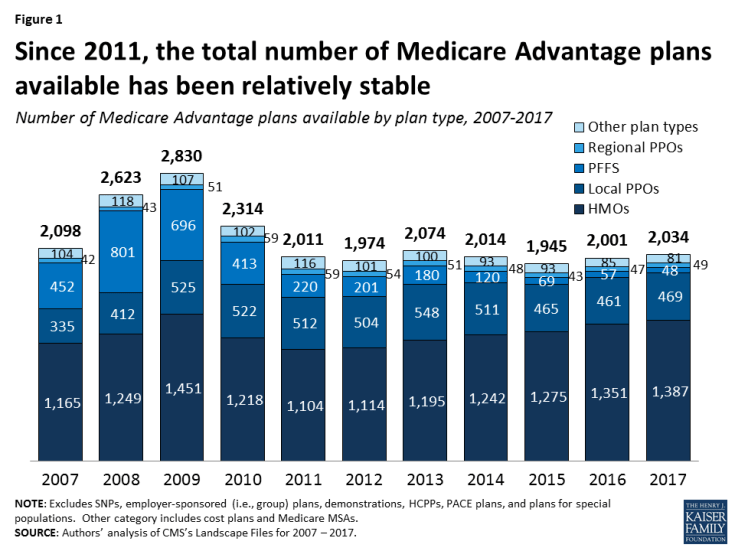 Figure 1: Since 2011, the total number of Medicare Advantage plans available has been relatively stable

HMOs continue to account for the large majority of plans available, and will account for two-thirds of all plans offered in 2017 (Table A1).  Since 2010, the number of HMOs has increased each year, with 36 more HMOs in 2017, while the availability of other plan types has either remained similar or decline. 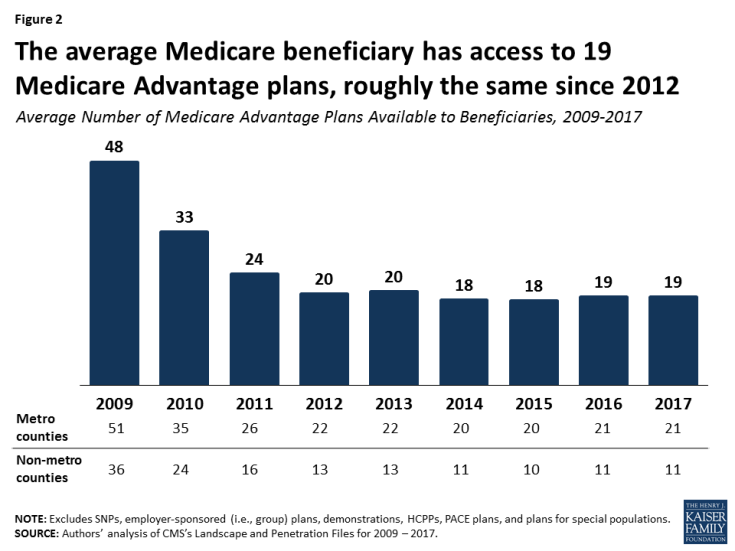 Figure 2: The average Medicare beneficiary has access to 19 Medicare Advantage plans, roughly the same since 2012 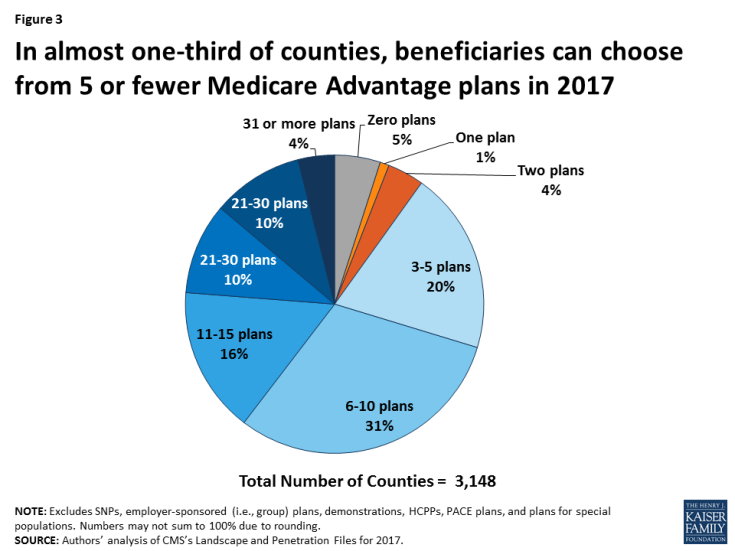 Figure 3: In almost one-third of counties, beneficiaries can choose from 5 or fewer Medicare Advantage plans in 2017 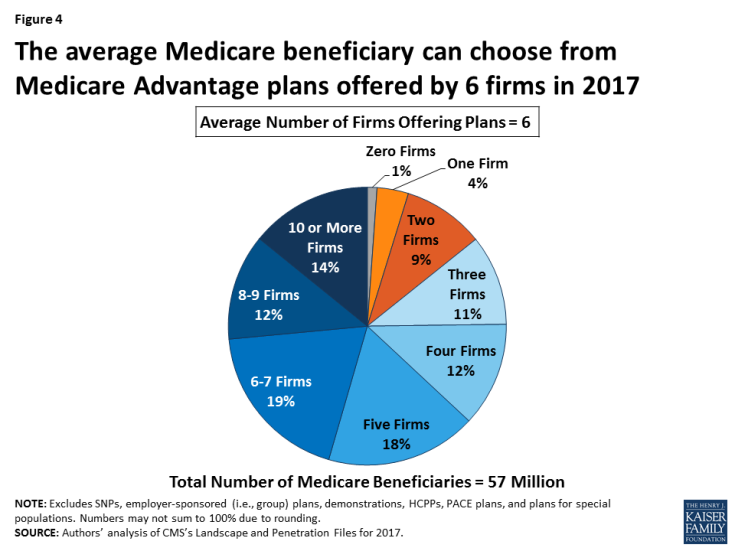 Figure 4: The average Medicare beneficiary can choose from Medicare Advantage plans offered by 6 firms in 2017 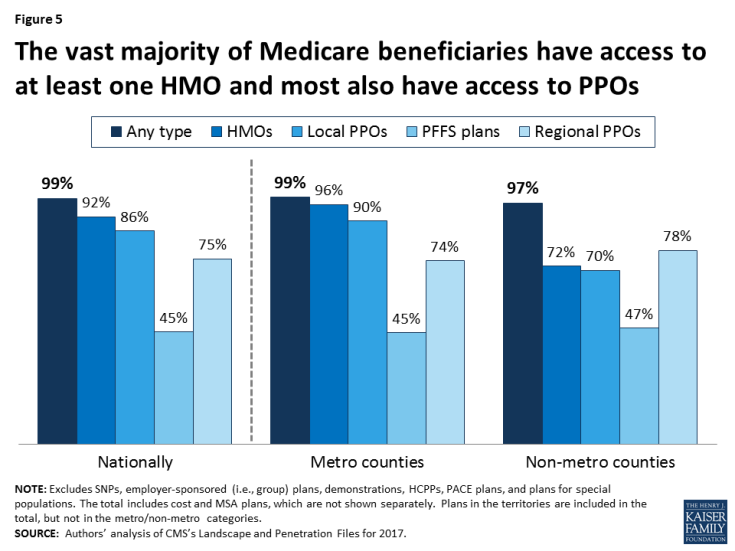 Change in Plan Availability By Firm

Half of the 271 new Medicare Advantage plans in 2017 are offered by UnitedHealthcare, Aetna, and firms affiliated with BlueCross BlueShield (BCBS; Figure 6).  UnitedHealthcare alone accounts for about one-quarter of all new Medicare Advantage plans.  Aetna and Humana, whose proposed merger is pending, together account for another one-quarter of new plans. 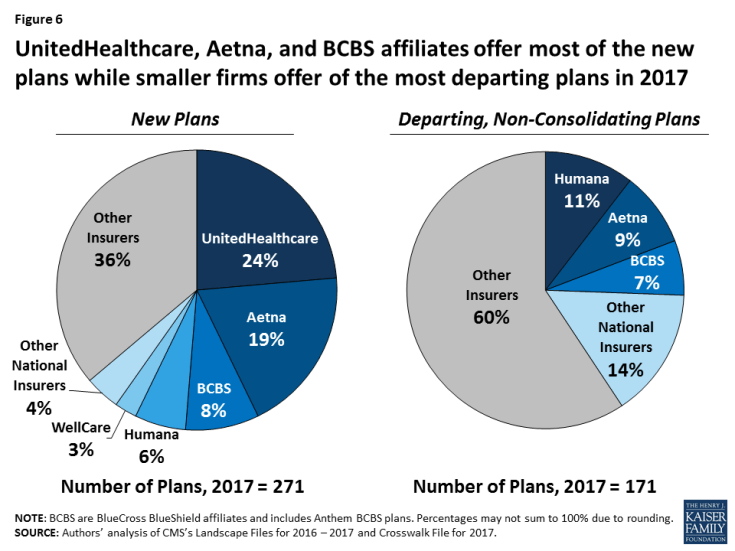 Figure 6: UnitedHealthcare, Aetna, and BCBS affiliates offer most of the new plans while smaller firms offer of the most departing plans in 2017

Fewer plans will be exiting than entering the Medicare Advantage market in 2017, and some firms will also be offering Medicare Advantage plans for the first time. Most of these appear to be local companies, some like SharpAdvantage in San Diego.  These new firms will be in nine states: California, Illinois, Iowa, Georgia, Florida, Mississippi, North Dakota, Pennsylvania, and South Carolina.

Most (60%) of the 171 departing plans were offered by smaller firms that tend to have a more regional focus.  Humana, Aetna, and BCBS affiliates comprise about one-quarter (26%) of the departing plans, with other national insurers, such as UnitedHealthcare, Cigna, Kaiser Permanente, Anthem and Wellcare, comprising a total of 15 percent, each with less than 3 percent of the departing plans.

To examine how premiums will change for Medicare Advantage enrollees, assuming they remain in the same plan between 2016 and 2017, this spotlight examines the premiums among MA-PDs offered in both years and weights the premiums by plan enrollment in 2016. This analysis includes plans with no premiums as well as plans with monthly premiums.  Enrollees may be able to prevent or reduce increases in premiums by switching to another plan.  After the open enrollment period, we will analyze the premiums for plans selected by all Medicare Advantage enrollees in 2017.1 In recent years, average premiums, weighted by actual enrollment, have tended to be lower than estimates of weighted premiums based on prior year enrollment. 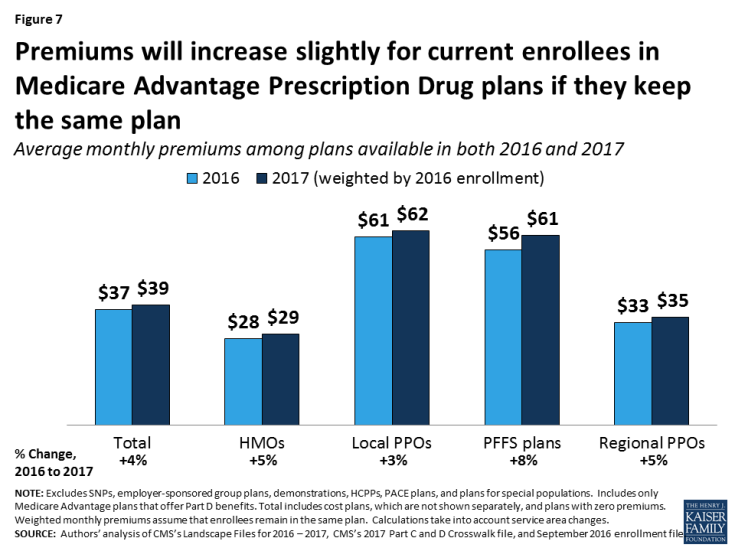 Figure 7: Premiums will increase slightly for current enrollees in Medicare Advantage Prescription Drug plans if they keep the same plan

In general, enrollees in MA-PDs that will continue to be offered in 2017 had somewhat lower premiums (averaging $37 per month), on average, than enrollees in plans that will be exiting the market (averaging $42 per month; Table A1).  However, the difference varies across plan types and these changes are difficult to interpret because plan premiums are a function of many plan-specific factors, as well region-specific factors. 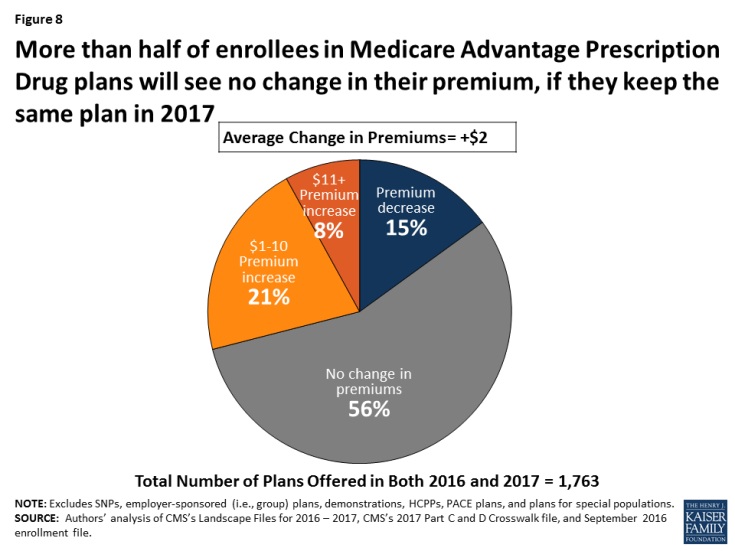 Figure 8: More than half of enrollees in Medicare Advantage Prescription Drug plans will see no change in their premium, if they keep the same plan in 2017 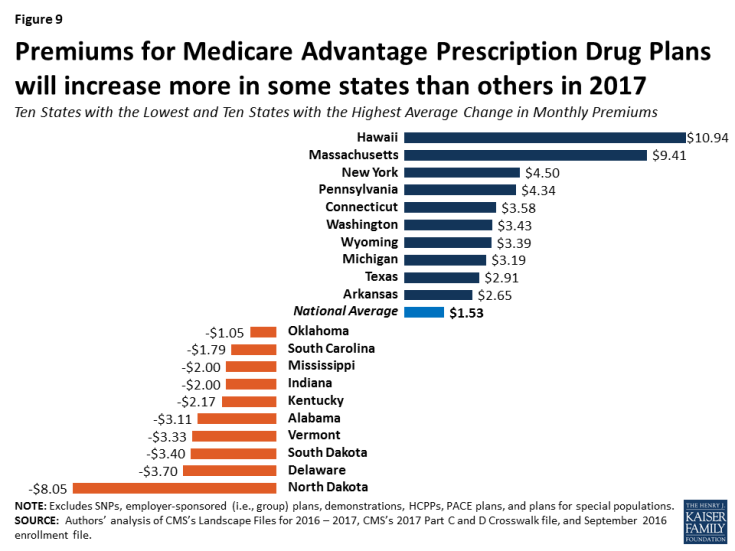 Figure 9: Premiums for Medicare Advantage Prescription Drug Plans will increase more in some states than others in 2017

Medicare Advantage plans with no additional premium (other than the Medicare Part B premium) – so called “zero premium plans” – have been a feature of the Medicare Advantage landscape for many years. About four-fifths (81%) of all beneficiaries will have access to a zero-premium MA-PD in 2017, the same as in 2016 (Figure 10).  The continued availability of zero-premium plans mainly reflects offerings among HMOs since zero-premium plans are less common among other plan types. More local PPOs will have zero premiums in 2017 but the share of local PPOs using this feature has varied over time. 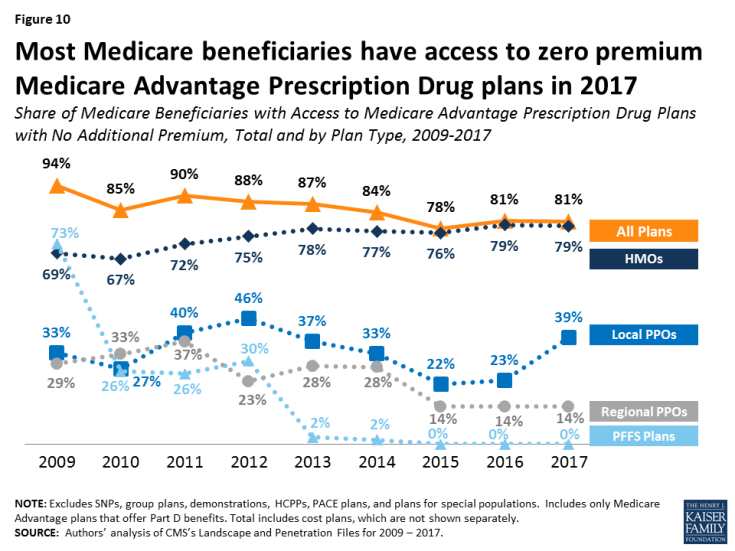 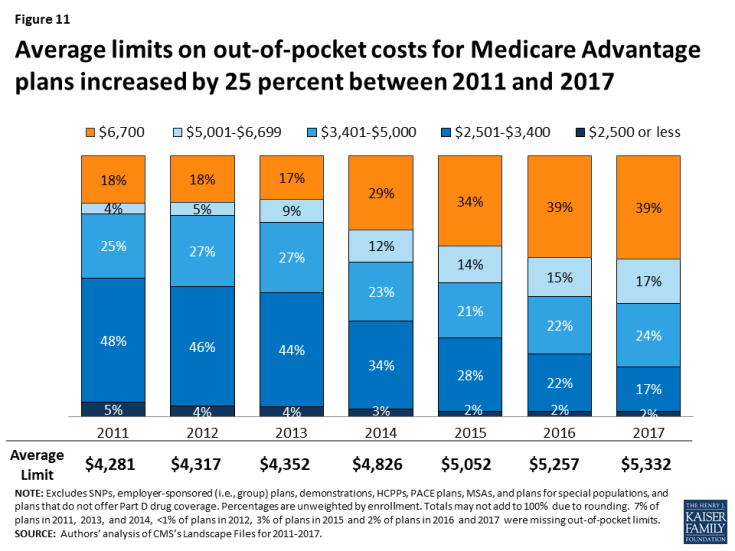 Figure 11: Average limits on out-of-pocket costs for Medicare Advantage plans increased by 25 percent between 2011 and 2017 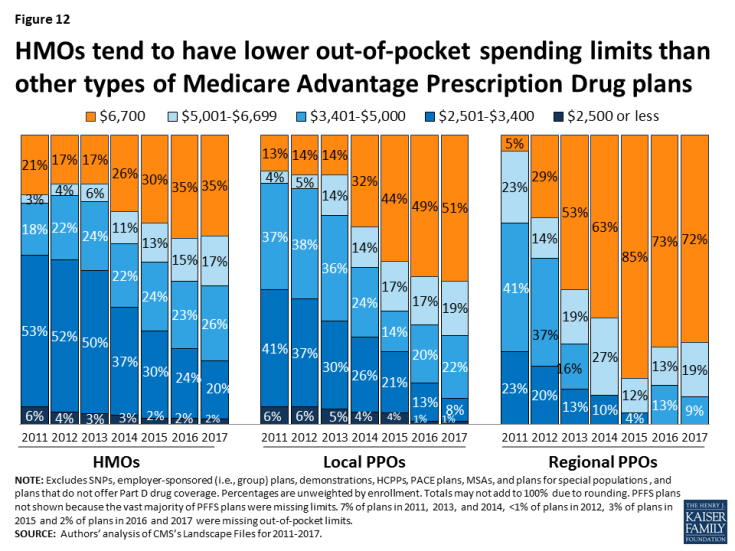 In 2017, the vast majority (88%) of Medicare Advantage plans will offer prescription drug coverage. Historically, plans without a drug benefit were developed for beneficiaries who may have access to other sources of prescription drug coverage, such as retiree health coverage from former employers or the Veterans Health Administration, as well as those who for any other reason do not want to purchase such coverage.

Coverage of the Part D Deductible

The standard design of the drug benefit includes an initial coverage deductible which is updated each year, and is $400 in 2017.  Plans can vary the benefit design as long as they provide cost-sharing that is at least actuarially equivalent to the standard benefit. In 2017, half (51%) of MA-PDs will impose a deductible for prescription drug coverage.  Since 2010, the average MA-PD deductible has quintupled from $26 in 2010 to $135 in 2017 (Figure 13).  A smaller share of MA-PDs will charge the maximum deductible (10% in 2017 versus 16% in 2016).  Deductibles are more frequently used  in free standing PDPs and more charge the maximum allowed amount.4 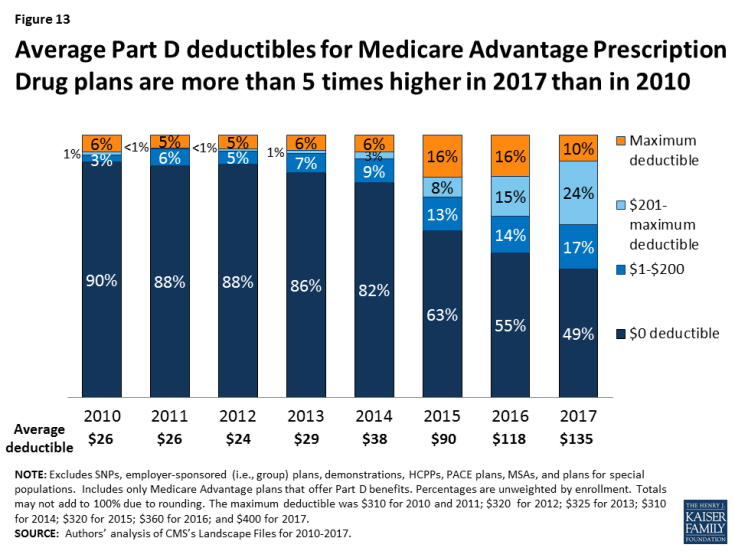 Figure 13: Average Part D deductibles for Medicare Advantage Prescription Drug plans are more than 5 times higher in 2017 than in 2010

Since 2012, Medicare Advantage plans have received bonus payments based on their contract’s quality ratings, and plans within contracts with higher ratings also receive higher rebate amounts.  In 2017, plans within contracts with 4 or more stars will receive bonuses of 5 percent. Plans in lower scoring contracts receive no bonuses. (Those too new or with too few enrollees in their contract to be rated get a bonus of 3.5 percent).  These bonus percentages are doubled in some counties.5  Additionally, beneficiaries can enroll in a plan with 5 stars (the highest rating)  at any time during the year, not just during the annual open enrollment period. 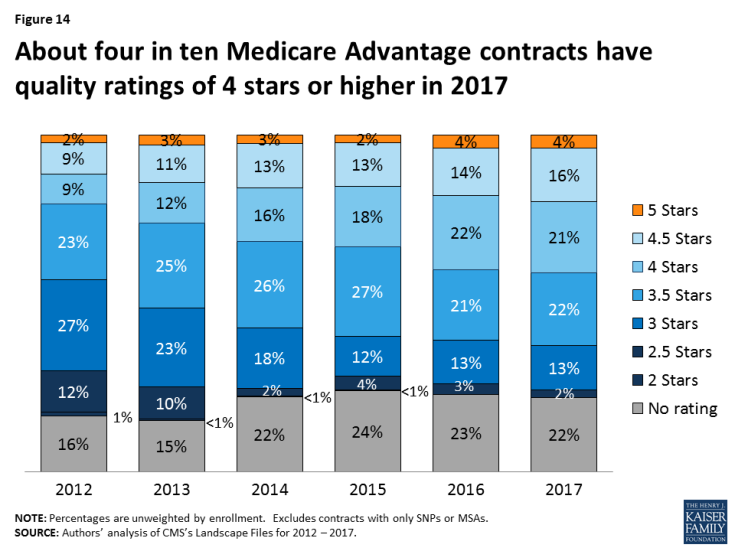 Figure 14: About four in ten Medicare Advantage contracts have quality ratings of 4 stars or higher in 2017

Change in Number and Availability of Plans Offered by Firm

While many organizations offer Medicare Advantage plans, most plans are owned or affiliated with a small number of companies and organizations.  In 2016, 7 firms and affiliates accounted for almost three-quarters of all enrollment: UnitedHealthcare, Humana, Blue Cross and Blue Shield (BCBS) affiliated companies (including Anthem BCBS plans), Kaiser Permanente, Aetna, Cigna, and Wellcare. These companies and affiliates account for 64 percent of the plans being offered in 2017 (Table A4). 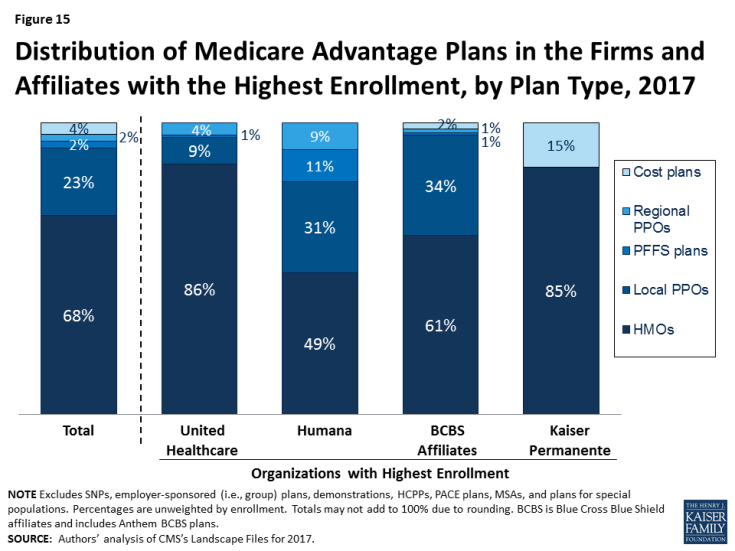 Figure 15: Distribution of Medicare Advantage Plans in the Firms and Affiliates with the Highest Enrollment, by Plan Type, 2017

Aetna’s proposed merger with Humana has raised concerns about its potential to reduce competition in the Medicare market.  Humana is a dominant firm in the Medicare Advantage market and a merger with Aetna would likely increase the dominance of the combined firms, even with some divestment. Even without a merger, Aetna’s footprint in the Medicare Advantage market has expanded since its acquisition of Coventry.  In 2017, Aetna plans will be available to more than half (56%) of all beneficiaries, up from 49 percent in 2016 and 33 percent in 2014, the year after the acquisition of Coventry.  Between 2016 and 2017, Aetna will greatly increase the number of local PPOs it offers, rising from 82 plans in 2016 to 117 plans in 2017.  Accordingly, a larger share of beneficiaries will have access to an Aetna local PPO (52%) in 2017, up from four in ten (40%) beneficiaries in 2016, and one-third of beneficiaries (33%) in 2015.

Plan choices for beneficiaries will be relatively stable between 2016 and 2017, with very little change in the number or type of plans available to beneficiaries or the firms offering those plans.  Firms continue to offer diverse products and most beneficiaries have a choice of HMOs and PPOs, while fewer beneficiaries have access to PFFS plans.  Most beneficiaries will continue to have a wide choice of plans, including plans that require no additional premiums. Premium increases generally will be moderate but will vary considerably across enrollees.  Medicare beneficiaries enrolling in a Medicare Advantage plan will find that the plans available to them, on average, have somewhat higher quality ratings in 2017 than in 2016 but provide less financial protection with higher limits on out-of-pocket costs.

Given the rise in Medicare Advantage enrollment, it is unfortunate that beneficiaries do not have more information that is readily available to facilitate plan comparisons and inform their choices.  In particular, it remains challenging for consumers (and researchers) to obtain information that can be used to compare plan networks, cost sharing, and extra benefits, or the performance of individual plans on quality and efficiency metrics.  Such information could be used to strengthen program oversight.

The multi-year experience of private plans in Medicare provides insight into the implications of choice for older adults and people with disabilities on Medicare. By its nature, the structure of the Medicare Advantage program and its reliance on competition among private plans demands much of plan enrollees, particularly if they want to maximize Medicare’s value.  Since firms can make changes to their plans each year (e.g., premiums, cost-sharing, extra benefits and provider networks), each year’s choices bring potentially significant changes for beneficiaries to consider that can be particularly challenging for beneficiaries with serious health problems or cognitive limitations.   Perhaps that is one reason why such a small share of Medicare Advantage enrollees change plans each year,6 unless confronted with relatively steep premium increases.

While Medicare Advantage has been relatively stable in recent years, it was not always so.  Beneficiaries experienced considerable disruption in the late 1990s and early 2000s when firms departed many markets and reduced benefits under the Medicare +Choice program, the predecessor program to Medicare Advantage.7  The current stability in the Medicare Advantage market has benefited considerably from the current payment system which, even after the ACA payment reductions, pays plans, on average, 102 percent of the cost of coverage under traditional Medicare.  Some lawmakers are now proposing to transform Medicare into a premium support system, building off of Medicare Advantage.  A premium support system could be a major departure from the current program due to many factors, including a change in federal payments to plans and plans’ financial incentives, which would have uncertain effects for plans and beneficiaries.