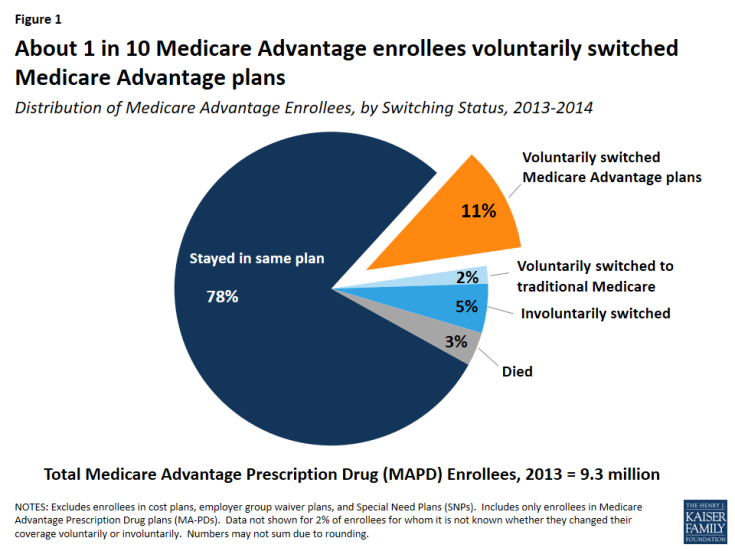 The share of Medicare Advantage enrollees switching plans has been virtually the same each year between 2007 and 2013, averaging 9 percent annually (Figure 2). The relatively constant rate of voluntary plan switching is noteworthy given the number of changes in Medicare Advantage policies and payments implemented during this time frame, including the establishment of new network requirements for private fee-for-service (PFFS) plans enacted as part of the Medicare Improvements for Patients and Providers Act (MIPPA) and implemented in 2011, as well as the reductions in federal payments to plans enacted as part of the Affordable Care Act of 2010. 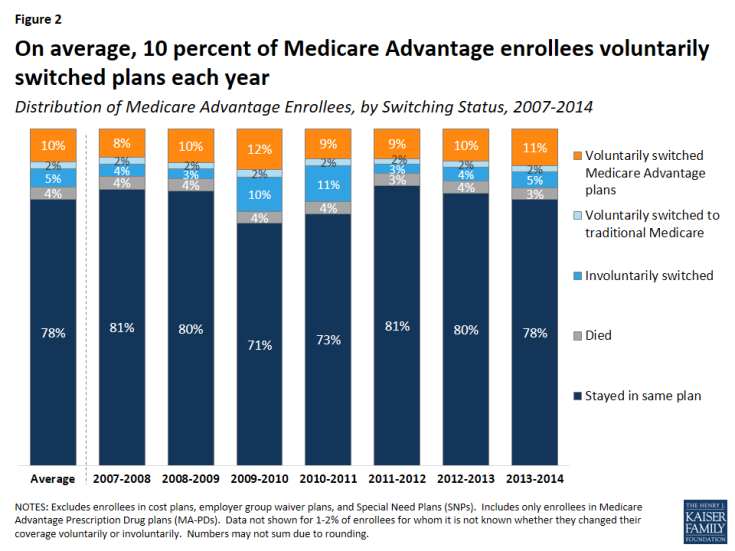 Switching rates among enrollees were not consistently higher or lower in one large firm compared to another, with the exception of plans offered by Kaiser Permanente, which had consistently low switching rates relative to all other firms (Figure 3). Switching rates by firm fluctuated over the years. Higher switching rates in some years may have been due to PFFS plans exiting markets, a larger share of people switching out of regional PPOs, or other firm-specific factors. 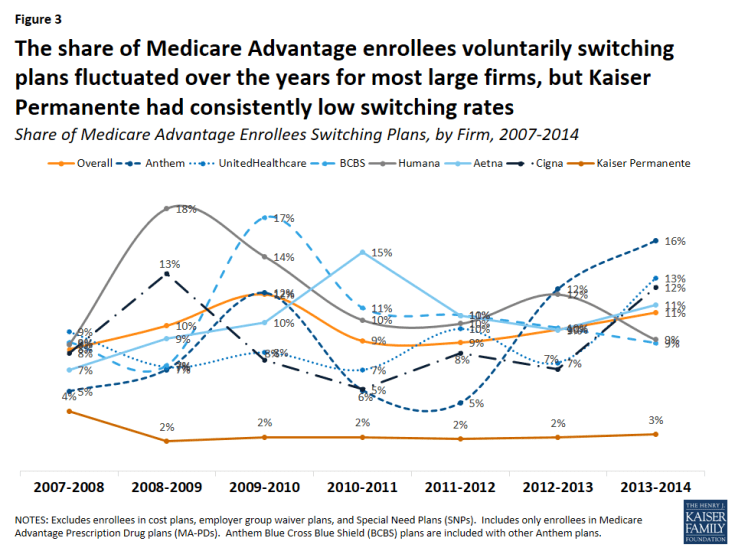 Figure 3: The share of Medicare Advantage enrollees voluntarily switching plans fluctuated over the years for most large firms, but Kaiser Permanente had consistently low switching rates

Between two percent and four percent of Kaiser Permanente enrollees switched Medicare Advantage plans between 2007 and 2014 – far lower than the overall average of ten percent. The low voluntary switching rate among enrollees in Kaiser Permanente plans could be partly due to its integrated delivery system, which would require enrollees to change doctors if they switched to a plan offered by another firm.

Comparison of Switching Rates Across Markets 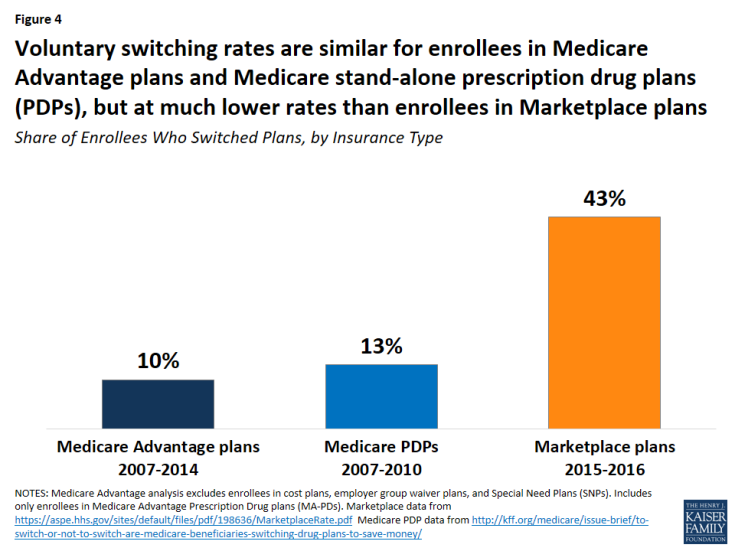 Figure 4: Voluntary switching rates are similar for enrollees in Medicare Advantage plans and Medicare stand-alone prescription drug plans (PDPs), but at much lower rates than enrollees in Marketplace plans 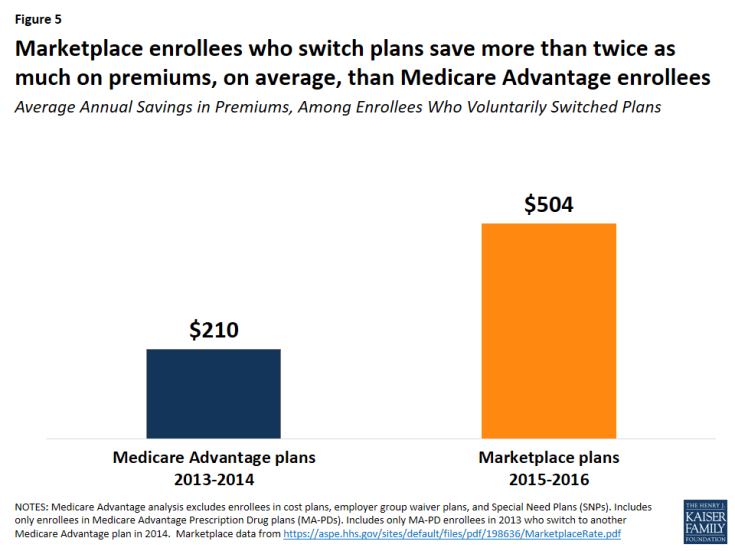 Figure 5: Marketplace enrollees who switch plans save more than twice as much on premiums, on average, than Medicare Advantage enrollees

Switching rates among enrollees were somewhat higher among beneficiaries who were relatively young (ages 65 to 75). Plan switching declined with age, from 12 percent (ages 65-74) to 7 percent (ages 85 and older) between 2013 and 2014 (Figure 6). 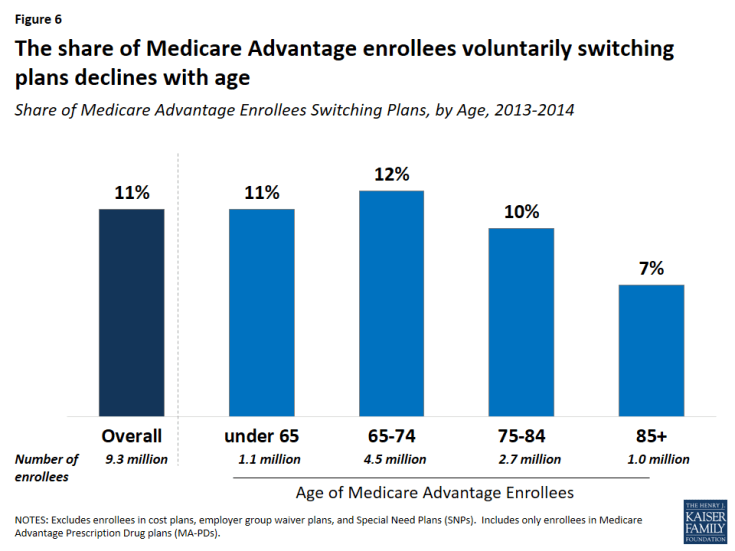 Switching rates among Medicare Advantage enrollees did not vary by gender, nor were they consistently higher or lower than among enrollees in metropolitan or non-metropolitan areas.10 Due to data limitations, this analysis does not examine whether switching rates differed by enrollees’ health status, chronic conditions, or use of health care services. 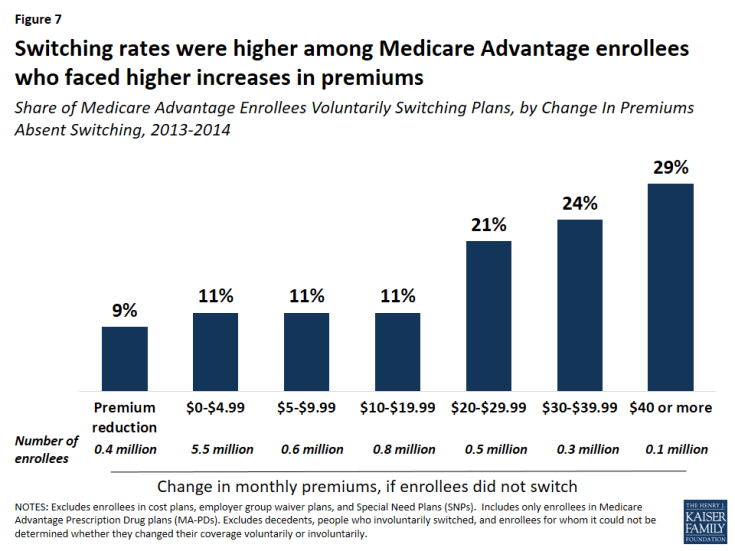 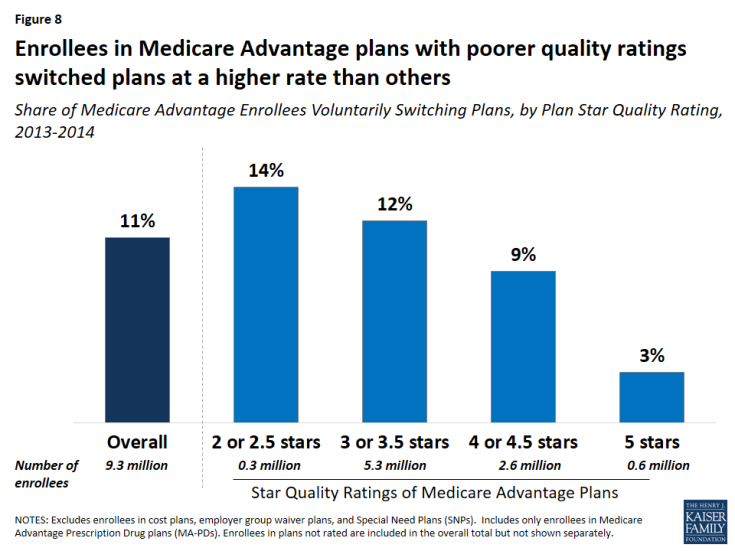 Figure 8: Enrollees in Medicare Advantage plans with poorer quality ratings switched plans at a higher rate than others

For most years between 2007 and 2014, a larger share of enrollees in regional PPOs than enrollees in other plan types voluntarily switched plans (Figure 9). In contrast, the switching rate was generally lowest among HMO enrollees. 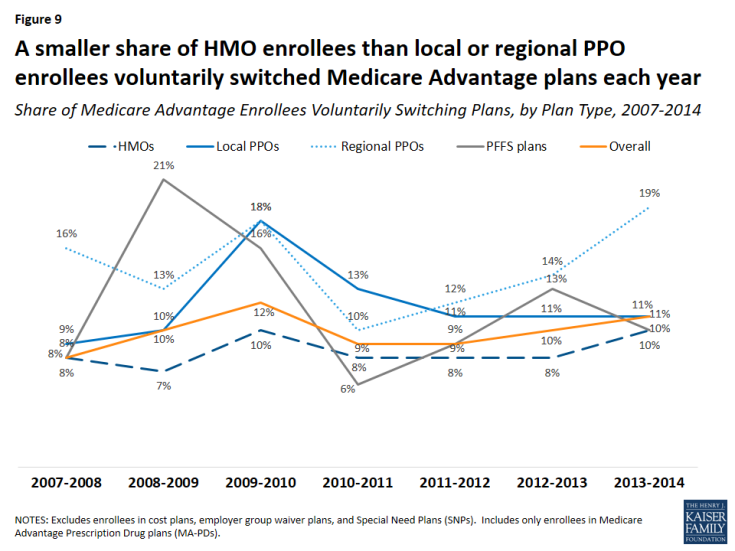 Switching rates from enrollees in plans under relatively new contracts (beginning in 2006 or more recent) were higher than among enrollees in plans under older contracts. Between 2013 and 2014, nine percent of enrollees in contracts that began before 2000 switched plans compared to 15 percent of enrollees in contracts that began in 2006 or later. However, these differences are intertwined with the types of plans that were available in a given year. For example, regional PPOs, which have higher switching rates than other plan types, could not be offered prior to 2006. Similarly, most of the contracts prior to 2000 were for HMOs.

Voluntary switching rates did not differ across the county characteristics that were examined, including the number of plans available or the Medicare Advantage payment quartile for the county. 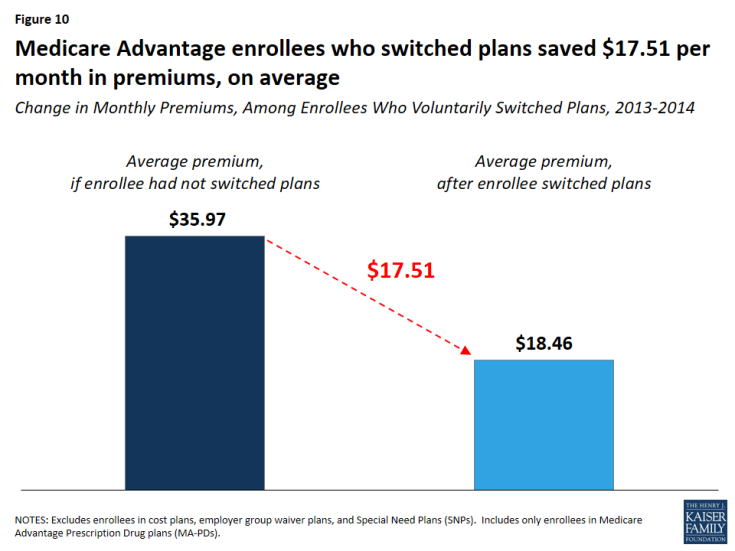 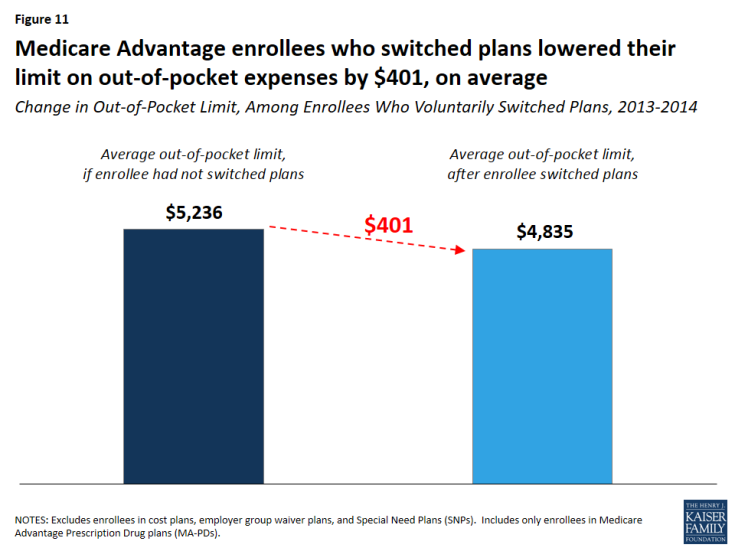 Figure 11: Medicare Advantage enrollees who switched plans lowered their limit on out-of-pocket expenses by $401, on average

Since 2011, all Medicare Advantage plans have been required to limit enrollees’ out-of-pocket expenses on Medicare Part A and B services to no more than $6,700 and are encouraged by the Centers for Medicare and Medicaid Services (CMS) to have limits of $3,400 or less.

Medicare Advantage enrollees who voluntarily switched plans changed to plans with slightly higher star ratings than their original plan, but the improvement was a modest 0.11 stars, on average. Between 2013 and 2014, Medicare Advantage enrollees who switched plans moved from a plan with 3.51 stars in 2014, on average, to a plan with 3.79 stars in 2014, on average –0.28 points higher than their prior plan. Had they stayed in the same plan, they would have seen their plan’s rating increase 0.17 points, on average, the same as the increase in quality ratings for enrollees who did not switch plans.

Relatively few Medicare Advantage enrollees, roughly one in ten, voluntarily switch from one MA-PD to another MA-PD each year, suggesting that plan switching among seniors is more the exception than norm. The takeaway from this analysis for beneficiaries is not entirely clear. On the one hand, our analysis shows some price sensitivity among Medicare Advantage enrollees: switching rates were higher among the minority of enrollees with relatively big premium increases. On the other hand, the findings confirm that the vast majority of enrollees do not change plans, and that plan “stickiness” may come at a cost, in terms of higher premiums and higher out-of-pocket spending limits.

Enrollees may be sticking with their plan for a number of reasons. They may be satisfied with their coverage. They may decide they would rather pay a bit more in premiums to avoid the hassle and time involved with making a change, particularly because most face a premium increase of less than $10 on average, in 2014. In focus groups, seniors have said that they appreciate the opportunity to change plans but often feel that the differences across plans are not important enough to warrant the time and effort it takes to compare and change plans.12 Some enrollees may place a higher value on other factors, such as having access to specific doctors or the comfort of sticking with a plan that is familiar. They may find that the information they need to compare plans is not readily available or that the process of comparing premiums, benefits, and provider networks across plans is too tedious.

For plans, the relatively high enrollee retention rate could strengthen incentives to keep their enrollees relatively healthy with low medical costs over the course of many years.  However, it could also send a signal to plans that the risk of losing enrollees to a competitor is low as long as they do not drastically increase enrollees’ costs or disrupt their care arrangements.

For policymakers, these findings underscore the importance of tools and other support to help beneficiaries choose plans that are most likely to meet their individual needs. For instance, the Medicare Plan Finder could be improved to allow beneficiaries to more easily compare provider networks, cost-sharing, and benefits. Additionally, support could be strengthened for counselors and others who help Medicare beneficiaries with these increasingly complex decisions. Efforts that aim to make it easier for Medicare beneficiaries to evaluate their options could increase competition among plans and improve beneficiaries’ satisfaction with their coverage. The fact that most Medicare Advantage enrollees are not changing plans may not be cause for concern, but it does raise questions about whether the Medicare Advantage market is working as well as it could for consumers, especially those who are relatively old or with significant health care needs.