Over the past 15 years, Medicaid enrollment increased substantially during two major recessions, with annual growth peaking in FY 2001 at over 9 percent, and again at nearly 8 percent in FY 2009. During economic downturns, individuals lose jobs, incomes decline and more people qualify and enroll in Medicaid which increases program spending. At the same time, economic downturns negatively affect state tax revenues. This places additional pressure on state budgets as demand for other forms of assistance (i.e. food stamps and unemployment benefits) also increases. During economic downturns, states face difficulty balancing these pressures and affording their share of Medicaid spending increases.

In response, Congress has twice passed temporary increases to the FMAP rates to help support states during economic downturns, most recently in 2009 as part of the American Recovery and Reinvestment Act (ARRA.)  The most significant source of fiscal relief to states in ARRA was a temporary increase in the federal share of Medicaid costs. To be eligible for ARRA funds, states could not restrict eligibility or tighten enrollment procedures in Medicaid or CHIP. The ARRA-enhanced match rates provided states with over $100 billion in additional federal funds over 11 quarters, ending in June 2011, as states were on the threshold of FY 2012.

State economies have demonstrated slow but sustained improvement following the worst recession since the Great Depression. Gross State Product (GSP,) a measure of state economic activity, grew by 1.8 percent from 2012 to 2013 at the national level, slightly slower than the previous year, but the fourth year of consecutive growth at the national level. All but two states (Alaska and DC) experienced positive GSP growth from 2012 to 2013, ranging up to 9.7 percent.

At the same time, the national unemployment rate has continued to decline, falling to 5.9 percent in September 2014, the lowest rate since July 2008.1 The declining rate of unemployment was related both to a reduction in the labor force participation rate and to continued job growth.2 After 55 months of private-sector job growth, there were 1.6 million more private sector jobs in August 2014 than before the recession.3 From February 2010 to August 2014, private sector job growth increased by an average pace of 188,000 jobs a month, with the pace picking up during the last seven months (227,000 jobs a month). Despite the improving economy, an estimated 9.3 million people remain unemployed, over 30 percent of whom are long-term unemployed (those actively looking for work for 27+ weeks.4) While unemployment has declined, 11 states (including DC) had rates at or above seven percent in August 2014. (Figure 4) 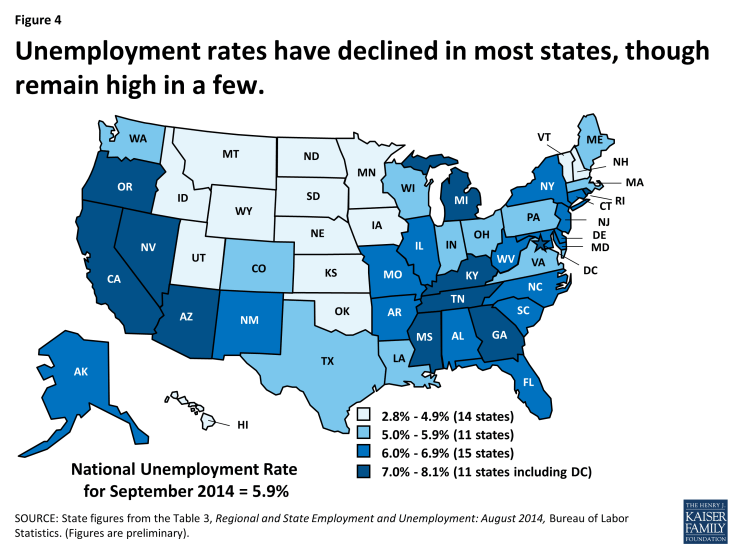 Figure 4: Unemployment rates have declined in most states, though remain high in a few.

On the whole, state revenue collections have also improved. After experiencing the sharpest decline in state tax revenues on record during the Great Recession, states had seen sixteen consecutive quarters of tax revenue growth before declining slightly in the first and second quarters of 2014 (-0.3 percent and -0.5 percent.) (Figure 5) These declines in 2014 were primarily driven by federal tax policy changes that went into effect in 2013 as well as changes in tax policy in some states largely affecting personal income tax collections. Other sources of tax revenues, such as sales taxes, showed continued growth.5 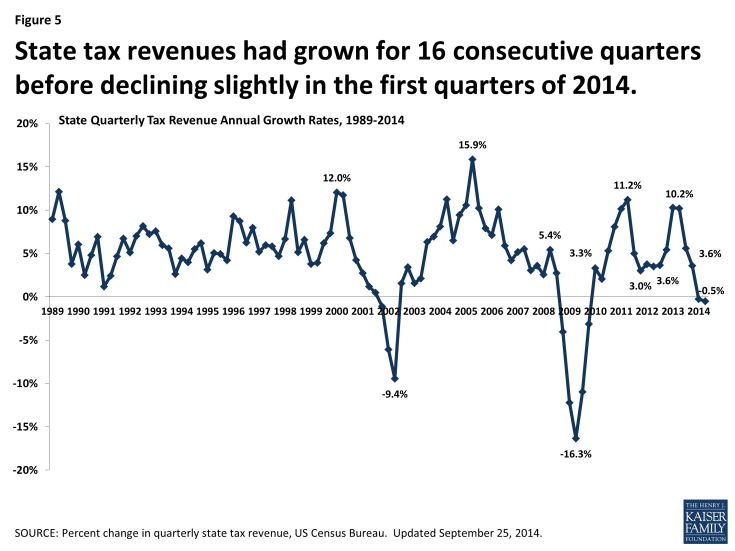 Figure 5: State tax revenues had grown for 16 consecutive quarters before declining slightly in the first quarters of 2014.

With the economy continuing to improve, Medicaid enrollment growth across the country slowed considerably in FY 2012 and FY 2013. Over those two years, average spending also slowed, but the end of the ARRA enhanced match rates at the end of SFY 2011 shifted state spending patterns as states tried to mitigate the loss of federal dollars in SFY 2012 resulting in a dip in spending in SFY 2012. With economic conditions improving, the largest driver of Medicaid enrollment and spending growth during fiscal years 2014 and 2015 has been related to the implementation of the ACA. (Figure 6) 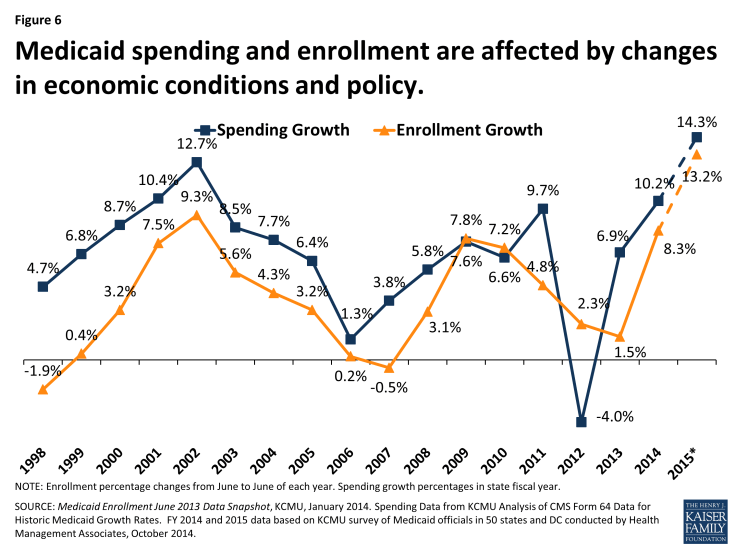 Figure 6: Medicaid spending and enrollment are affected by changes in economic conditions and policy.

As enacted, the ACA broadened Medicaid’s role, making it the foundation of coverage for nearly all low-income Americans with incomes up to 138 percent of the federal poverty level (FPL) ($16,105 per year for an individual in 2014). However, the Supreme Court ruling on the ACA effectively made the decision to implement the Medicaid expansion an option for states. For states that expand Medicaid, the federal government will pay 100 percent of Medicaid costs of those newly eligible for Medicaid for up to three calendar years from 2014 to 2016. The federal share phases down to 95 percent in 2017, 94 percent in 2018, 93 percent in 2019 and 90 percent in 2020 and remains at 90 percent thereafter, well above traditional FMAP rates in every state. (See Appendix for more information on Medicaid financing).

While nearly all states saw enrollment increases due to changes in enrollment systems and increased outreach, much of the enrollment growth (and related spending growth) nationally was driven by states adopting the Medicaid expansion, which states could implement starting January 1, 2014, halfway through FY 2014 for most states.

During FY 2014, 26 states (including DC) implemented the ACA Medicaid expansion. In FY 2015, two additional states are implementing the Medicaid expansion – New Hampshire in July 2014 and Pennsylvania in January 2015 – bringing the total to 28 states. Other states continue to discuss the opportunity to extend Medicaid under the financial terms spelled out in the ACA, including state-specific approaches. Indiana has submitted a waiver proposal to expand Medicaid through the “Healthy Indiana 2.0” plan in 2015 and Utah is in active negotiations with CMS to use an alternative approach for the Medicaid expansion. Other states expect to consider the issue in legislative sessions in 2015. (Figure 7) 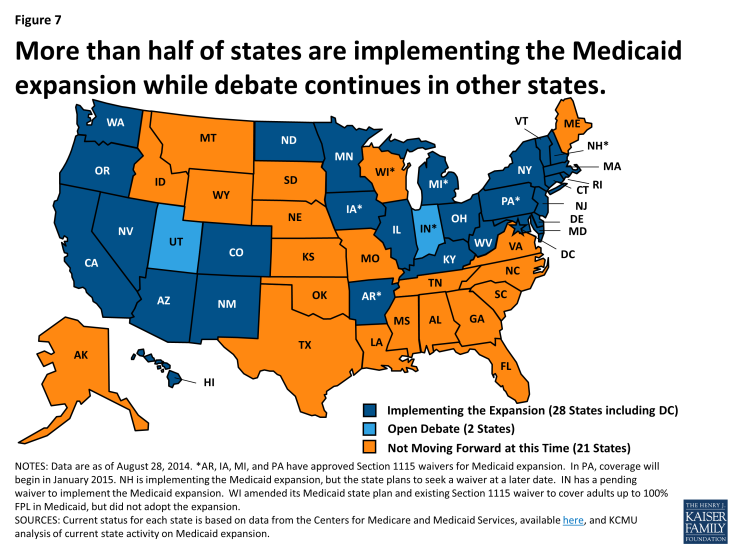 Figure 7: More than half of states are implementing the Medicaid expansion while debate continues in other states.

Medicaid enrollment increased on average by 8.3 percent in FY 2014 across all states, slightly less than the 8.8 percent growth states had projected on average at the beginning of the fiscal year.6 These slightly slower rates could be partially due to enrollment system problems, particularly with Healthcare.gov in the earlier months of open enrollment for coverage in the Marketplace. Enrollment growth in FY 2014 was faster than FY 2012 and FY 2013 due to the implementation of the ACA mid-way through state fiscal year 2014. All states, regardless of their decisions to implement the Medicaid expansion, attributed enrollment growth to higher take up among those already eligible, due to referrals from the health insurance Marketplaces and greater awareness of Medicaid due to outreach and publicity surrounding the ACA coverage expansions. The ACA Medicaid expansion was a driver of significant enrollment growth in states that implemented it, driving up the national average as well. Already, higher enrollment in Medicaid in 2014 has contributed to recent declines in the number of non-elderly adults who are uninsured.7,8

In FY 2015, Medicaid enrollment is projected to increase across all states at a higher rate (12.2%) than in FY 2014 (8.3%), reflecting the first full year’s impact of the eligibility and enrollment changes in the ACA. This rate of growth is driven by continued increases in enrollment primarily in states adopting the ACA Medicaid expansion. Across the 28 states implementing the Medicaid expansion in FY 2015, the number of persons enrolled in Medicaid is expected to increase on average by 18.0 percent while enrollment growth across the 23 non-expansion states is projected to average 5.2 percent. (Figure 8) 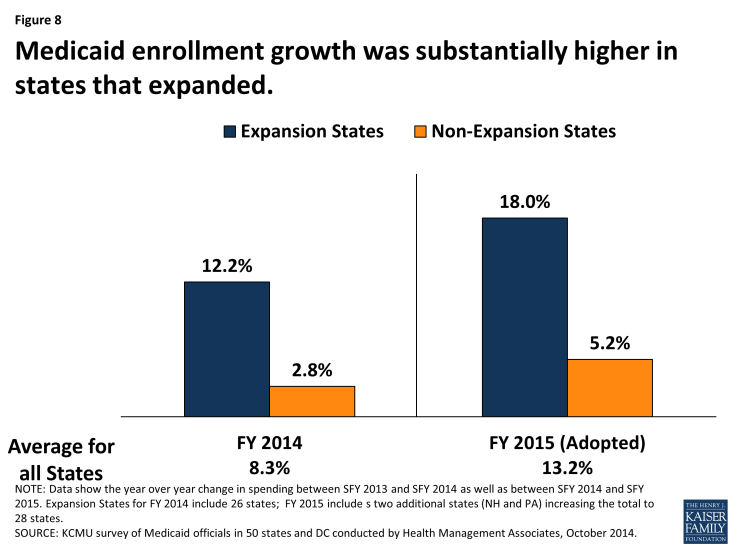 Total Medicaid spending growth in FY 2014 increased across all states on average by 10.2 percent, virtually identical to the 10.3 percent originally appropriated by state legislatures. The primary factor listed by state officials as contributing to this growth in spending was enrollment growth driven by the ACA-related eligibility changes. While total spending growth increased at higher rates than previous years across all states due to increased enrollment, states that implemented the ACA Medicaid expansion reported significantly higher rates of growth in total spending (13.1%) than states that did not implement the Medicaid expansion (5.6%). (Figure 9) Total spending growth was right on target with state projections in the states that expanded in FY 2014; total spending growth for states that did not expand was substantially lower than original projections (5.6% growth reported compared to 6.8% projected).9  The coverage provisions of the ACA went into effect in January 2014, mid-way through the state fiscal year which begins on July 1 in most states. 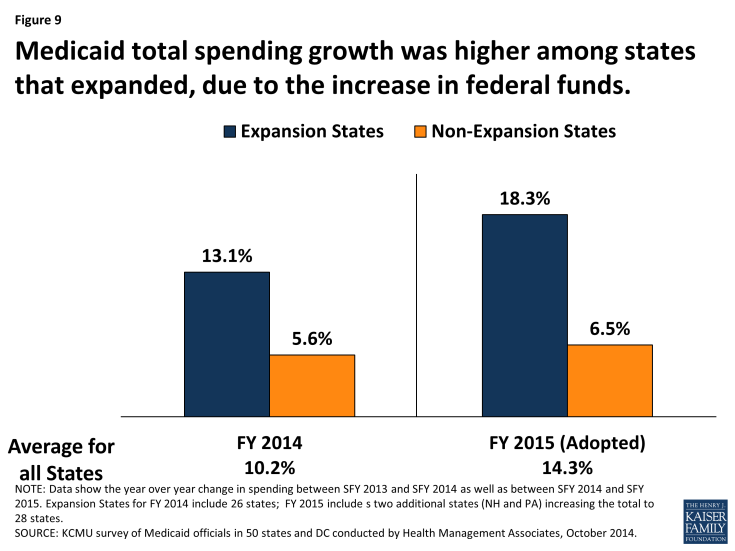 Figure 9: Medicaid total spending growth was higher among states that expanded, due to the increase in federal funds.

Historically, state and federal Medicaid spending have increased at similar rates. Differences between total and state spending growth are usually related to factors such as annual changes in the state-specific FMAPs, changes in contributions from local governments, special financing arrangements, or provider taxes. During the last two recessions, Congress enacted temporary enhancements to the FMAP to provide fiscal relief to states by reducing the state share of Medicaid spending. Due to this relief, there was a historic decline in state spending for Medicaid in FY 2009 and FY 2010 followed by substantial increases in FYs 2011 and 2012 due to the expiration of the enhanced-match rate. For FY 2014, state fund spending for Medicaid increased on average by 6.4 percent across all states compared to total spending growth of 10.2 percent. For FY 2015, state fund spending is projected to grow on average across all states by 5.2 percent, compared to total spending growth of 14.3 percent. The large gap between total and state spending growth is attributable to the higher FMAP available in states implementing the ACA Medicaid expansion. (Figure 10) 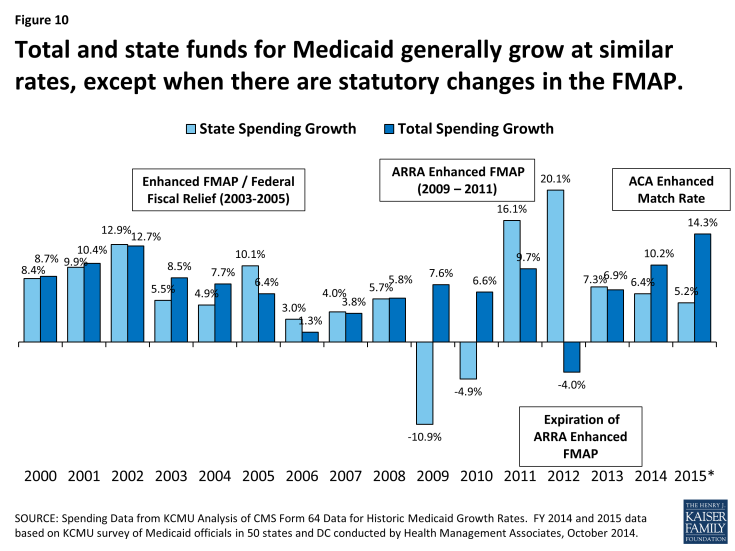 Figure 10: Total and state funds for Medicaid generally grow at similar rates, except when there are statutory changes in the FMAP.

For expanding states, total Medicaid spending generally will grow at a rate similar to enrollment growth; state spending for Medicaid will grow more slowly due to the higher federal match for newly eligible individuals. In FY 2014, across states implementing the Medicaid expansion, total Medicaid spending increased on average by 13.1 percent, nearly double the rate of state spending growth of 6.6 percent. This pattern continues into FY 2015, but is more dramatic with the enhanced 100 percent federal match rate in effect for the entire fiscal year in most of the expansion states. States expanding Medicaid are expecting total Medicaid spending growth of 18.3 percent on average in FY 2015 –more than four times the rate of growth of state Medicaid spending in these states (4.4%). (Figure 11) Some states implementing the Medicaid expansion also noted they will see savings of state dollars in their Medicaid budget when individuals previously enrolled in limited-benefit, regular FMAP state Medicaid programs now gain full Medicaid coverage and thereby qualify for the “newly-eligible 100 percent match rate.” 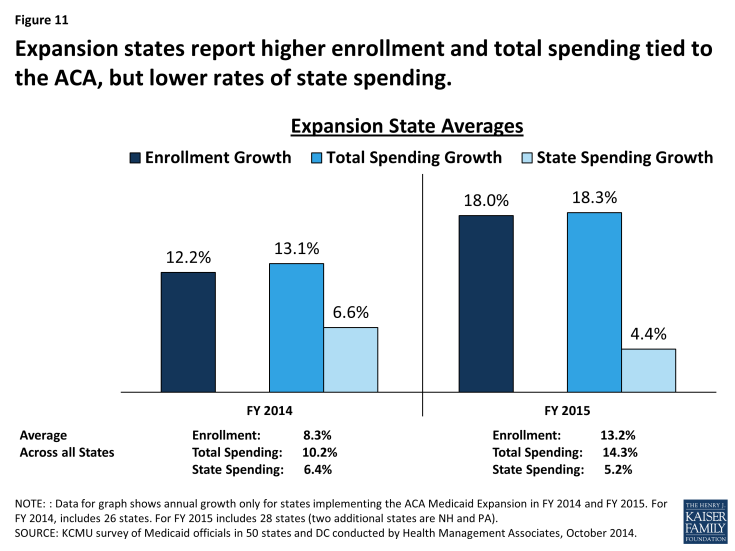 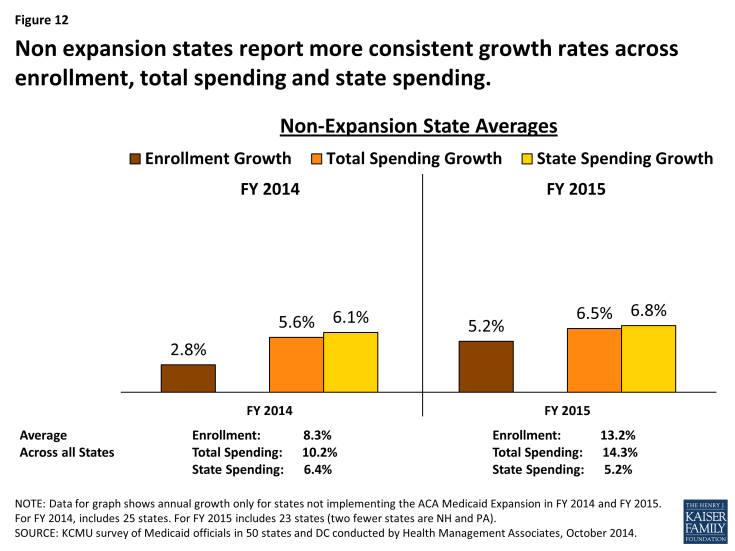 In addition to increases in health coverage and reductions in the number of uninsured, state decisions about the Medicaid expansions have important fiscal implications due in part to the increase in federal funds to the state that support health care providers including hospitals, health centers, and nursing facilities, and other businesses, and have positive effects on jobs, household spending, and state and local tax collections.11

In this year’s survey, states expanding Medicaid also typically cited net state budget savings beyond Medicaid. States reported that expanded coverage through Medicaid could allow for reductions in state spending for services such as mental health, correctional health, state-funded programs for the uninsured and uncompensated care. These savings are outside the Medicaid program and Medicaid spending and enrollment data included in this report. States also referenced studies that projected drops in the number of uninsured and increases in state economic activity.12 (Figure 13) 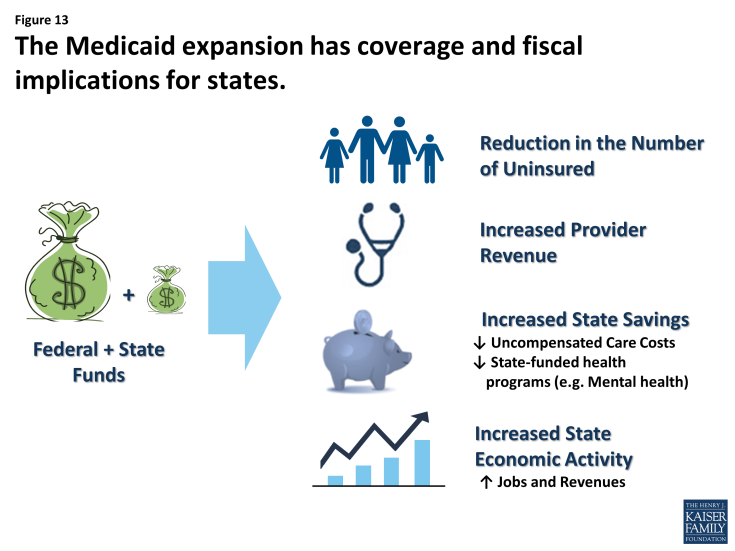 Figure 13: The Medicaid expansion has coverage and fiscal implications for states.

This Kaiser Commission on Medicaid and the Uninsured brief was prepared by Robin Rudowitz and Laura Snyder from the Kaiser Family Foundation, and Vernon K. Smith, Ph.D., Kathleen Gifford and Eileen Ellis with Health Management Associates.The authors express their appreciation to Dennis Roberts, who managed the database. We also thank the Medicaid directors and staff in all 50 states and the District of Columbia who completed the survey on which this brief is based.