Medicaid plays a significant role in the U.S. health care system, now providing health insurance coverage to more than one in five Americans and accounting for one-sixth of all U.S. health care expenditures.1 The Medicaid program continues to evolve as state and federal policy makers respond to changes in the economy, the broader health system, state budgets, and policy priorities, and in recent years, to requirements and opportunities in the Affordable Care Act (ACA). This report provides an in-depth examination of the changes taking place in Medicaid programs across the country. The findings in this report are drawn from the 16th annual budget survey of Medicaid officials in all 50 states and the District of Columbia conducted by the Kaiser Commission on Medicaid and the Uninsured and Health Management Associates (HMA), in collaboration with the National Association of Medicaid Directors. This report highlights policy changes implemented in state Medicaid programs in FY 2016 and those implemented or planned for FY 2017 based on information provided by the nation’s state Medicaid directors. The District of Columbia is counted as a state for the purposes of this report. Key findings include the following:

Medicaid expansion under the ACA continues to affect state policies for FY 2016 and FY 2017. As of October 2016, 32 states had adopted the ACA Medicaid expansion. This includes 26 states that implemented the expansion in FY 2014, three states in FY 2015 (New Hampshire, Pennsylvania, and Indiana), two states in FY 2016 (Alaska and Montana), and Louisiana in FY 2017. Beyond eligibility changes tied to the ACA, in FY 2016 and FY 2017 states implemented or adopted only a few changes generally targeted to a limited number of beneficiaries. Medicaid policies related to beneficiary premiums and copayments changed little overall; most of the activity reported related to Medicaid waivers. In FY 2016, Montana implemented a Medicaid expansion waiver that included provisions to impose premiums or monthly contributions. At the time of the survey, Arkansas, Arizona, Kentucky, and Ohio had Medicaid waivers pending with premium provisions. HHS denied Ohio’s pending waiver on September 9, 2016 and the Arizona waiver was approved on September 30, 2016.

Many states have initiatives to expand coverage to criminal justice involved populations. In states that implemented the ACA Medicaid expansion, a greater proportion of this population is now eligible for Medicaid. Key initiatives include efforts to enroll individuals in Medicaid prior to their release and policies that maintain Medicaid eligibility during incarceration by suspending rather than terminating Medicaid coverage.

States continue to expand the use of MCOs and other delivery system reform efforts with goals to control costs, improve access to care and care outcomes, and ultimately improve population health (Figure ES-1). Many of these initiatives are targeted to high-need populations.

Reliance on risk-based managed care continues to grow as additional states use Managed Care Organizations (MCOs) to deliver care or enroll more populations. As of July 2016, 39 states contracted with risk-based managed care organizations (MCOs) to serve their Medicaid enrollees. (These states are referred to throughout the report as “MCO states.”) In 28 of the 39 MCO states, at least 75 percent of all Medicaid beneficiaries were enrolled in MCOs (an increase from 21 of 39 states in July 2015). Three states (Iowa, Rhode Island, and West Virginia) terminated their Primary Care Case Management (PCCM) programs in either FY 2016 or FY 2017 and shifted those populations into risk-based managed care. Alabama plans to implement a new MCO program in FY 2017 and Missouri plans to expand its MCO program statewide in FY 2017. 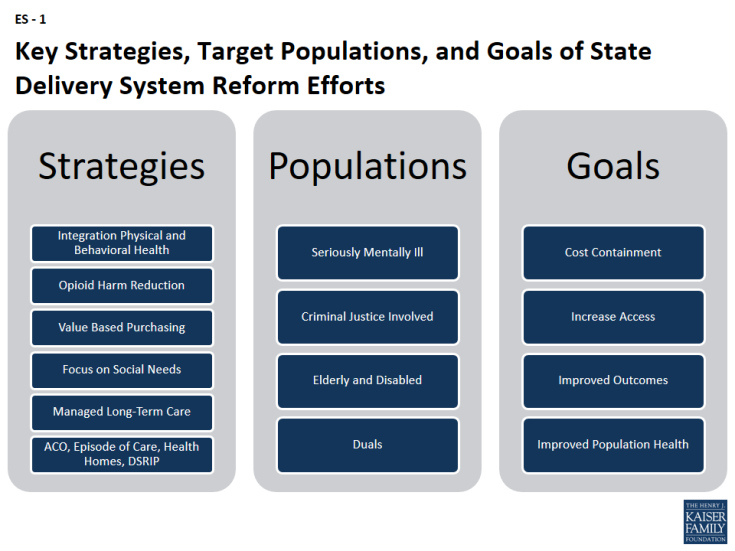 States sometimes exclude special populations and/or some behavioral health services from MCO contracts. This survey asked about populations with special needs that may be included or excluded from acute care MCO enrollment. States reported that of the special populations noted in the survey, pregnant women were most likely to be enrolled on a mandatory basis into acute care MCOs (28 states) while persons with intellectual or developmental disabilities (ID/DD) were least likely to be enrolled on mandatory basis (10 states) and also most likely to be excluded from MCO enrollment (7 states).

Many states are implementing quality initiatives encouraging or requiring MCOs to implement alternative payment models or screen for social needs. Thirty-six (36) of the 39 MCO states reported one or more select MCO quality initiatives in place in FY 2015 and 17 states in each of the survey years (FY 2016 and FY 2017) implemented or adopted new quality initiatives such as pay for performance, reporting MCO quality metrics or collecting adult and child quality measures. In FY 2016, five states identified targets in MCO contracts for the use of alternative provider payment models; 10 additional states intend to do so in FY 2017. States are also using MCO arrangements to increase attention to the social determinants of health. Twenty-six (26) states reported requiring or encouraging MCOs to screen for social needs and provide referrals to other services in FY 2016 and four states intend to do so in FY 2017. States commonly require MCOs to perform a health needs/risk assessment that includes information on social determinants as well as medical needs. In addition, five states reported that they have policies in place to encourage or require MCOs to provide care coordination services to enrollees prior to release from incarceration (Arizona, Iowa, Kentucky, New Mexico, and Ohio), and 10 states intend to add such requirements in FY 2017.

Over two-thirds of all states (36) have at least one delivery system or payment reform initiative in place and the majority of states are expanding current programs or adopting new initiatives. Twenty-nine (29) states in either FY 2016 or FY 2017 reported adopting or expanding one or more initiatives including patient-centered medical homes (PCMHs), Health Homes, Accountable Care Organizations (ACOs), and other initiatives to better manage the care of persons with multiple chronic conditions. Interest in Episode of Care initiatives also ticked upward for FY 2017 (7 states). These initiatives may be implemented through fee-for-service or managed care. Seven states had Delivery System Reform Incentive Payment (DSRIP) programs in place in FY 2015. Four states reported new or expanded DSRIP programs in FY 2016 and five states reported new or expanded DSRIP programs in FY 2017.

Nearly every state reported actions to expand the number of persons served in community settings in FY 2016 and FY 2017, primarily through increased enrollment in HCBS waivers and implementing new HCBS SPAs. New PACE sites or expanded enrollment in existing PACE sites as well as including specific rebalancing incentives into managed care contracts that cover long-term services and supports (LTSS) were also strategies to increase community-based care.

Twenty-three (23) states provided some or all LTSS through a managed care arrangement as of July 1, 2016. Fifteen (15) states offered managed LTSS (MLTSS) on a statewide basis for at least some LTSS populations. The most common model combines both acute care and LTSS in a single plan, providing a comprehensive approach to service integration. Five states offer a prepaid health plan that covers only Medicaid LTSS. In FY 2016, four states implemented MLTSS or expanded MLTSS to new parts of the state, and four states expanded MLTSS to new populations. In FY 2017, two states anticipate geographic expansion in MLTSS, while five states anticipate adding new populations to MLTSS. Enrollment into the MLTSS program is always mandatory for seniors in 13 of the 23 MLTSS states, for individuals who have full dual eligibility status in nine states, for nonelderly adults with physical disabilities in 12 states, and for individuals with I/DD in eight states. Thirteen (13) states with MCOs offering LTSS reported having LTSS quality measures in place in FY 2015. In FY 2016, a total of six states implemented new or expanded LTSS quality metrics; five states plan to expand quality measures for LTSS in FY 2017.

States continue to rely on provider taxes, with eight states using this financing mechanism to fund the state share of ACA expansion costs. All states except Alaska use at least one provider tax or fee to help finance Medicaid. In FY 2016 and FY 2017, 22 states increased or planned to increase one or more provider tax or fee and nine states are adding new provider taxes. Eight of the Medicaid expansion states (Arkansas, Arizona, Colorado, Illinois, Indiana, Louisiana, New Hampshire, and Ohio) reported plans to use provider taxes or fees to fund all or part of the costs of the ACA Medicaid expansion beginning in January 2017, when states must pay five percent of the costs of the expansion.

A total of 21 states expanded or enhanced covered benefits in FY 2016, and 20 states planned benefit expansions in FY 2017. The most common benefit enhancements reported were for behavioral health and substance use disorder services, telemedicine and tele-monitoring services, and dental services for adults. Far fewer states reported benefit restrictions.

With rising drug costs, many states are focused on pharmacy cost containment efforts. The vast majority of states identified high cost and specialty drugs as a significant cost driver for state Medicaid programs, most pointing specifically to hepatitis C antivirals. Many states are focused on refining and enhancing their pharmacy programs, including actions related to new and emerging specialty and high-cost drug therapies. A total of 31 states in FY 2016 and 23 in FY 2017 reported implementing or plans to implement pharmacy cost containment efforts. Thirty-three (33) of the 39 states with MCO contracts as of July 1, 2o16 reported that the pharmacy benefit was generally carved in, and another state reported plans to implement a full pharmacy carve-in in January 2017. States reported how they manage MCO pharmacy programs; in FY 2015, 13 states had uniform clinical protocols, 10 states had uniform prior authorization, and 10 states had uniform PDL requirements across fee-for-service and MCO programs. Many states reported expansions of these strategies in FY 2016 and FY 2017.

As part of the battle to address the nation’s opioid epidemic, a majority of states have adopted, and many are expanding, pharmacy management strategies specifically targeted at opioids. The CDC has developed and published recommendations for the prescribing of opioid pain medications for adults in primary care settings.2 Twenty-one (21) states reported adoption or plans for adoption in FY 2017 for their FFS programs. Of the 39 states with MCO contracts, 11 are requiring MCOs to adopt the CDC guidelines or are planning to do so in FY 2017. Many other states indicated these policies were under review for FFS and MCOs. States were also adopting strategies to expand access to naloxone, a prescription opioid overdose antidote that prevents or reverses the life-threatening effects of opioids. Almost all states reported specific opioid-focused pharmacy management policies. Imposing a quantity limit was the most common pharmacy management approach, used by almost all states (46) in FY 2015 for their FFS programs. Use of prior authorization (45 states), clinical criteria (42 states), and step therapy (32 states) were also widespread in FY 2015 for FFS. Significantly fewer states (12) reported having a requirement in place in FFS in FY 2015 for Medicaid prescribers to check their states’ Prescription Drug Monitoring Program before prescribing opioids to a Medicaid patient. Many states also reported MCO policies in place; however, it is unclear how many states require such policies.

Administration and Key Priorities for 2017 and Beyond

Medicaid provides health coverage for over one-fifth of all Americans and accounts for one-sixth of national health expenditures.3 Its administration involves complex systems, rules, and requirements. States indicated their most significant administrative challenges related to implementing the ACA, major delivery system reforms, new federal regulations, and new eligibility and IT systems. Medicaid directors noted that limited resources in terms of staff and funding for administration make it difficult to balance competing priorities and implement multiple significant initiatives. Despite the administrative and fiscal challenges, Medicaid directors listed an array of priorities for FY 2017 and beyond that focus on payment and delivery system initiatives designed to control costs and achieve better health outcomes.