Community health centers play a major role in providing health care for millions of people who reside in areas designated by the federal government as medically underserved, based on high rates of poverty and infant mortality and other measures of health care need.1 In 2014, 1,249 community health centers in the 50 states and DC served nearly 22.5 million people.2 Another 81“look-alike” health centers, which meet all health center requirements but receive no federal funding, served nearly 900,000 additional patients.3 Health center patients are much more likely to be poor or low-income than Americans overall, and they are much more likely to be uninsured.4 Six in ten health center patients are nonelderly adults – a population largely excluded from Medicaid before the ACA.

The ACA expanded Medicaid eligibility to nonelderly adults up to 138% of the federal poverty level (FPL) and provided income-related subsidies for the purchase of private insurance through new Marketplaces for people  with income between 100% and 400% FPL. Both these new avenues of coverage, but particularly the Medicaid expansion, have the potential to lower the uninsured rate among health center patients, a largely low-income population. Following the Supreme Court ruling that effectively made the Medicaid expansion to adults optional for states, many, but not all, states implemented it. In states that did not expand Medicaid, adults with incomes between 100% and 138% FPL are eligible for Marketplace subsidies. But in these states, many adults below 100% FPL fall into a coverage gap because they are above the Medicaid income cut-off in their state but below the income eligibility threshold for Marketplace subsidies. In Medicaid expansion states, there is a continuum of coverage options for low-income adults, with Medicaid for those up to 138% FPL and Marketplace subsidies for those with higher income.

The ACA coverage expansions have important implications for health centers, which anchor health care in underserved communities, providing comprehensive primary care, case management, and enabling services such as medical transportation, and serving as an entry point for access to more specialized care. In addition, health centers have experience providing onsite outreach and enrollment assistance to uninsured patients who may be eligible for Medicaid or other coverage. During the first ACA open enrollment period, health centers provided enrollment assistance to more than 10 million people.5

To investigate and compare the historical and recent experience of health centers in Medicaid expansion and non-expansion states, the Kaiser Family Foundation and the Geiger Gibson RCHN Community Health Foundation Research Collaborative at George Washington University’s Milken Institute School of Public Health used federal data to assess changes in health center patient volume and insurance coverage in the two groups of states. Findings from a nationwide survey of health centers, fielded in Fall 2014, provide insight into additional differences between health center experiences in Medicaid expansion and non-expansion states, related to their enrollment assistance efforts and service capacity. This survey followed on a Fall 2013 survey to assess health centers’ outreach and enrollment activities on the eve of the first year of ACA coverage expansions.6

We analyzed data from the federal Uniform Data System (UDS), into which all health centers report annually, to assess growth in the volume of health center patients between 2013 and 2014 and over the 2004-2014 decade; 2014 UDS data became available for analysis in late August 2015. We also used UDS data to examine 2013-2014 changes in the health coverage profile of health center patients overall and separately in Medicaid expansion and non-expansion states.7

We used data from the 2014 Follow-up Survey of Health Centers’ Outreach and Enrollment Activities to analyze health centers’ enrollment assistance activities during the first ACA open enrollment period (October 1, 2013 through March 31, 2014); major barriers to their current enrollment efforts; and increases in selected measures of service capacity since January 1, 2014. We emailed the survey between late September and November 2014 to all health centers listed in the 2013 UDS (2014 UDS data were not yet available). A total of 6798 health centers in all 50 states and DC responded, yielding an overall response rate of 57%; the response rate was 50% or higher in 44 states and DC, and the lowest rate in any state was 40%. The survey responses were almost evenly distributed between the Medicaid expansion states (including DC) (n=364) and the non-expansion states (n=315). To adjust for observed differences between respondents and non-respondents, we weighted the survey data by total health center patients, the proportion reported as racial/ethnic minorities, and total revenue per patient, using the 2014 UDS data. 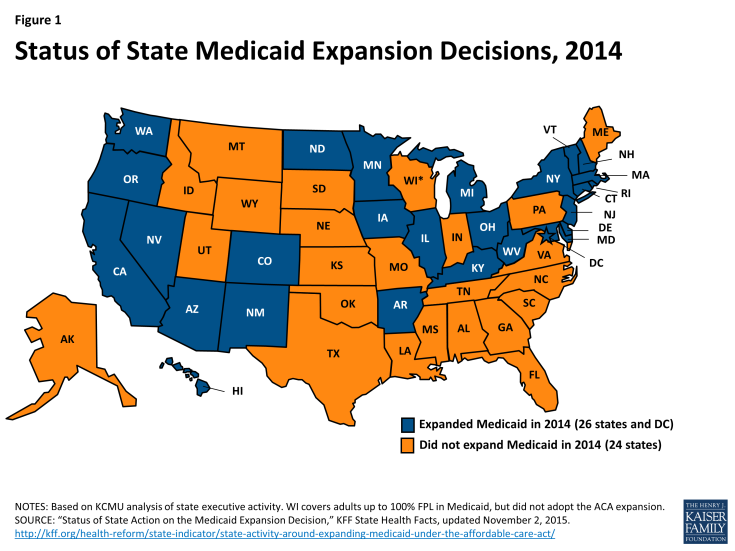 The number of people served by health centers and the number covered by Medicaid both grew substantially from 2013 to 2014. 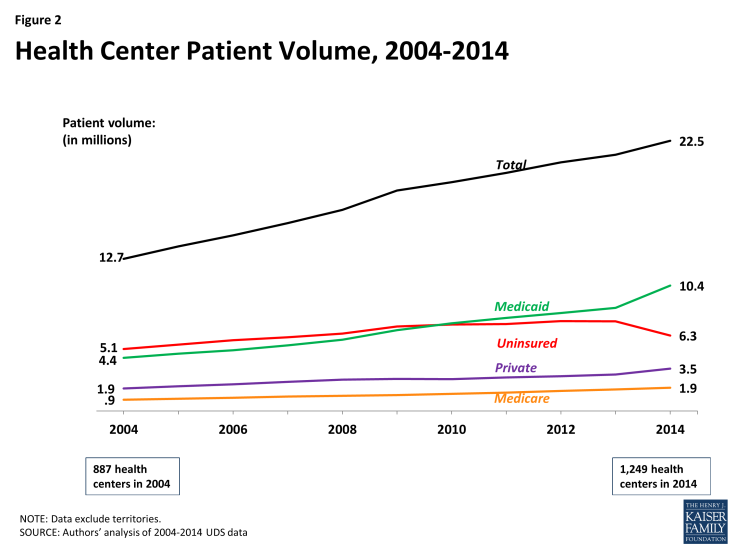 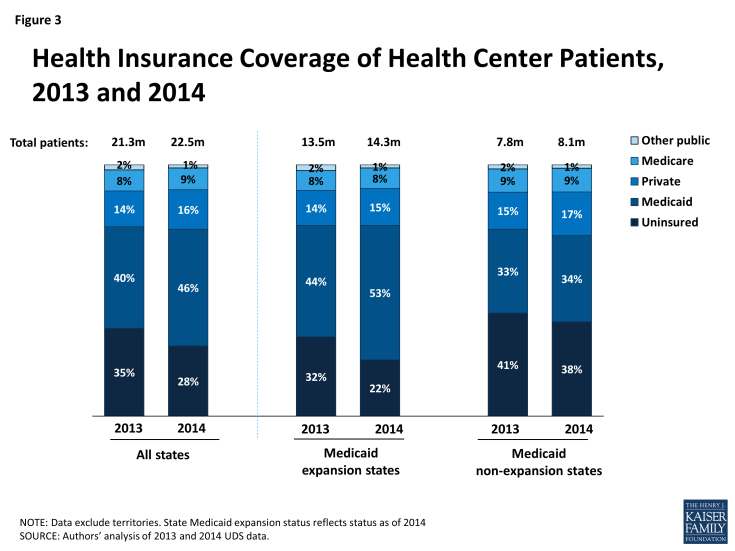 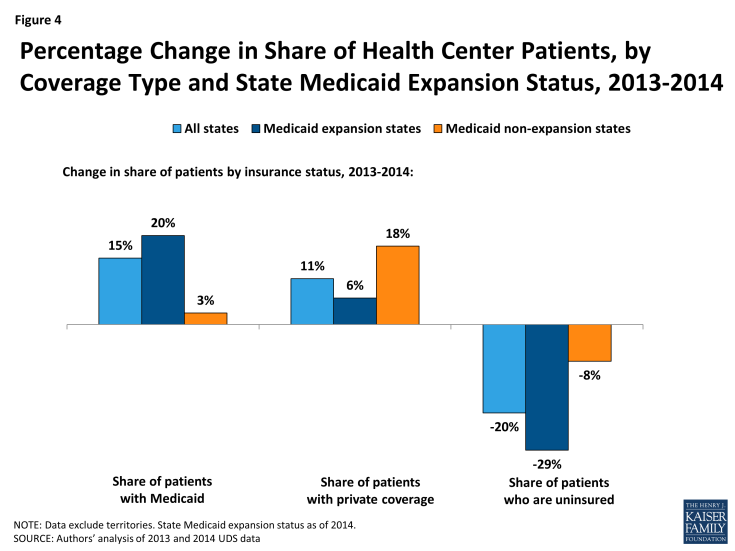 Health centers in Medicaid Expansion and Non-expansion States Report Some Common and Some Different major Barriers to Current Enrollment Activities. 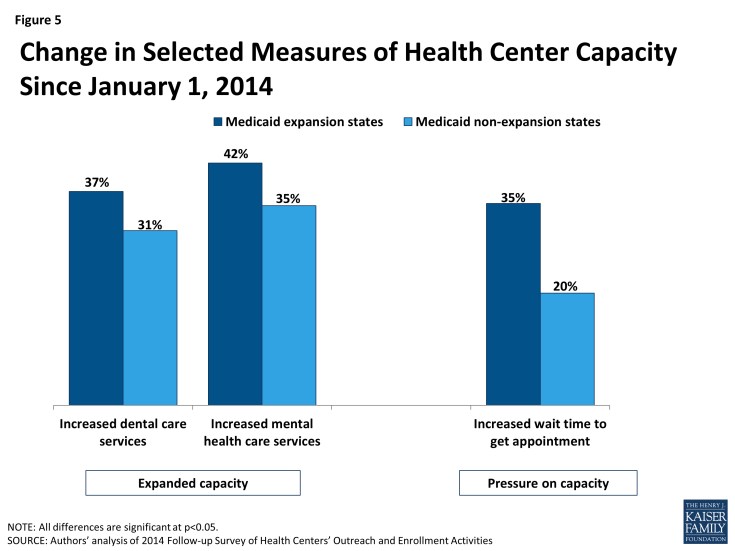 Regardless of their state’s Medicaid expansion status, health centers play a crucial role in providing outreach and enrollment assistance to their patients and communities. Substantial gains in health coverage among health center patients provide new evidence of the impact of their efforts. Health centers are well-equipped to assist patients who are very poor, new to navigating a complex system of coverage, enrollment, and plan selection, and often without access to technology necessary to enroll online. Even so, despite streamlined enrollment systems under the ACA, patient confusion about eligibility and documentation requirements pose major challenges to health centers’ current enrollment activities. Health center grant funding will remain important to sustaining health centers’ ability to link their patients and communities to coverage.

As ACA implementation proceeds, a key ongoing role for health centers will be to identify and enroll uninsured health center patients who are eligible for coverage. Some patients remain ineligible for Medicaid or ACA coverage because of their immigration status. But health centers’ ability to connect patients with coverage is most powerfully influenced by state Medicaid expansion decisions, and at this writing, 20 states have not moved forward, leaving millions uninsured and straining health centers’ capacity to serve them. These non-expansion states are mostly in the South,15 where poverty is deepest, communities of color are more concentrated,16 and gaps in access to preventive care and treatment, leading to avoidable complications of disease and poor health outcomes17 are particularly great. It will be important to continue to assess the implications of Medicaid expansion for health center primary care capacity, including access to pediatric care, women’s health services, general adult medicine, and services for special needs populations, such as patients with physical and mental health disabilities. Understanding the broader impacts of Medicaid expansion on low-income communities, for example, on employment opportunities and local economies, would also help to inform state policy choices.

The high uninsured rate even among health center patients in Medicaid expansion states underscores the continuing importance of federal grant funding for health centers, as well as coverage expansion, to sustain and improve access to care in underserved communities. In addition, considering the significant role of health centers in serving Medicaid beneficiaries and other low-income populations, the extent to which they are integrated into emerging delivery systems that involve new provider alignments and performance-driven payment systems will have important implications for health care access and quality, the future of the health care safety-net, and efforts to improve population health.

Funding support for this paper was provided to The George Washington University by the RCHN Community Health Foundation.