This report provides the latest data on donor government resources available for family planning activities in low- and middle-income countries. It is part of an effort by the Kaiser Family Foundation that began after the London Summit on Family Planning in 2012 where donors committed US$2.6 billion in additional funding to increase access to family planning by 2020 (see Appendix 1).1 This current report provides data on donor government disbursements in 2016, the most recent year available. It includes data from all members of the Organisation for Economic Co-operation and Development (OECD)’s Development Assistance Committee (DAC), as well as non-DAC members where data are available.2 Data are collected directly from donors and supplemented with data from the DAC. Ten donor governments that account for 98% of total disbursements are profiled in this analysis. Both bilateral assistance and core contributions to UNFPA are included. See methodology for more detail. For information on family planning funding from other sources (e.g. multilateral organizations, foundations, etc.) see Appendix 2. 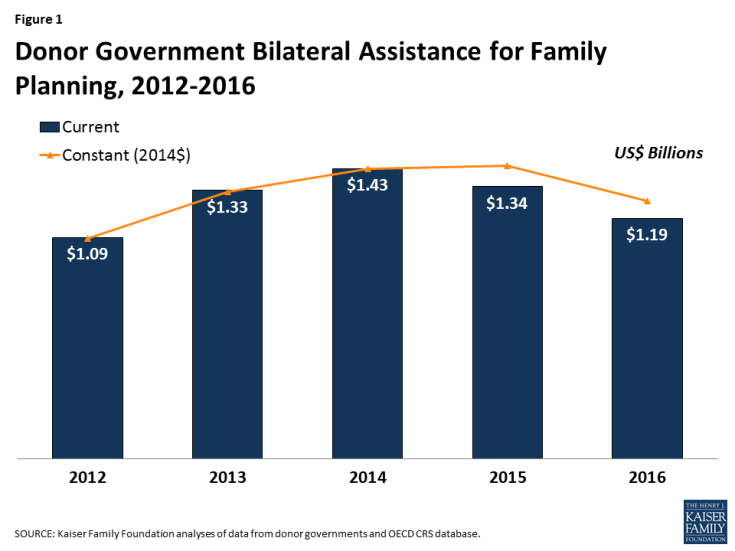 In 2016, donor governments disbursed US$1,187.8 million in bilateral funding for family planning activities (see Table 1, Figure 1 & Appendix 3), a decline of more than US$150 million (-12%) compared to the 2015 level (US$1,344.0 million). This marks the second year of declines after initial increases following the London Summit in 2012. Much of the decline over the past two years can be attributed to two factors: 1) the rise in the value of the U.S. dollar compared to other currencies in 2015, which accounted for 36% of the decline; and 2) an apparent delay in the timing of disbursements by the U.S., which accounted for 42% of the decline (while U.S. funding declined by more than US$100 million in 2016, annual funding commitments appropriated by Congress have remained flat for the past several years; in addition, there have been other years where disbursements have varied from commitments; see Figure 2).3 However, even after accounting for currency fluctuations and the timing of disbursements, funding declined by 22% over the two-year period and returned to 2013 levels.

Among the donors profiled, five (Australia, Denmark, Germany, the Netherlands, and Sweden) increased FP funding in 2016, four decreased funding (France, Norway, the U.K., and the U.S.) and one remained flat (Canada). This was the case in current U.S. dollars as well as after adjusting for currency fluctuations. 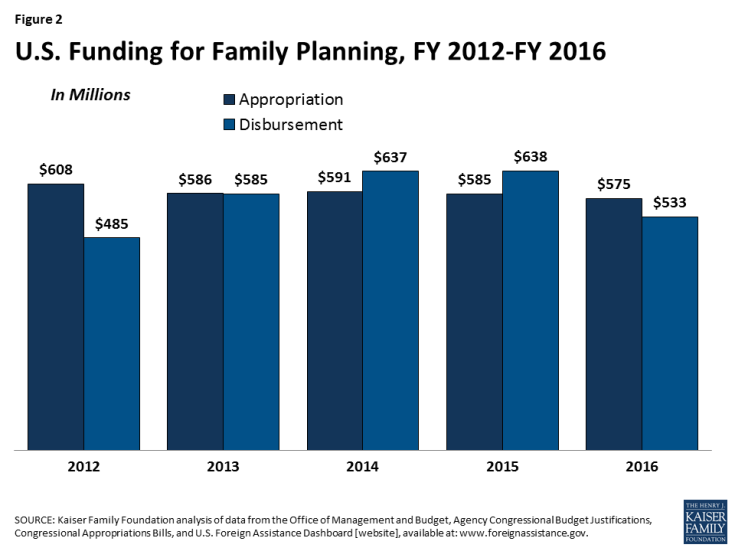 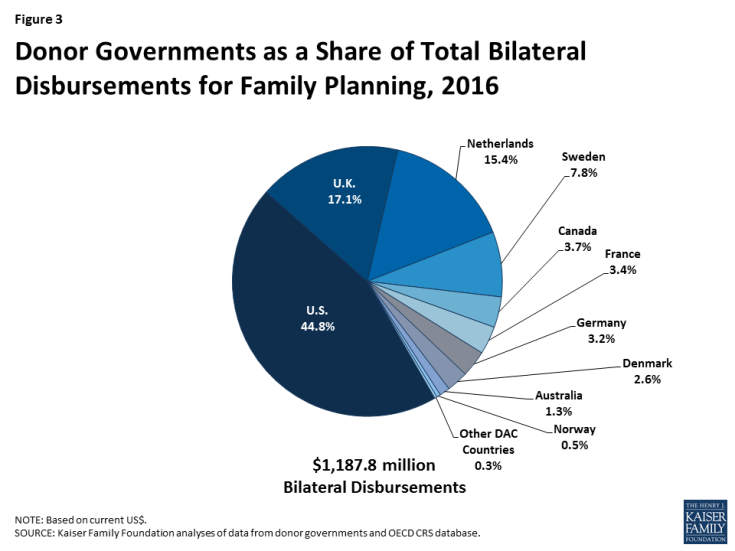 Figure 3: Donor Governments as a Share of Total Bilateral Disbursements for Family Planning, 2016

In 2016, donor governments provided US$347.8 million in core contributions to UNFPA, a decrease of US$44.8 million (-13%) below 2015 levels (US$392.6 million) and US$123.7 million (-26%) below 2014 levels. Despite the overall declines, the majority of donors either increased funding (Germany and Sweden) or remained flat (Canada, France, Netherlands, and U.S.); four donors declined (Australia, Denmark, Norway and the U.K.); however U.K. contributions remained flat when measured in currency of origin. Sweden provided the largest core contribution to UNFPA in 2016 (US$59.0 million), followed by Norway (US$46.8 million), the Netherlands (US$39.1 million), and Denmark (US$28.1) (see Figure 4 and Table 2). Among the ten donors profiled, one donor – Norway – provided a larger contribution to UNFPA’s core resources than their total bilateral disbursement for family planning. 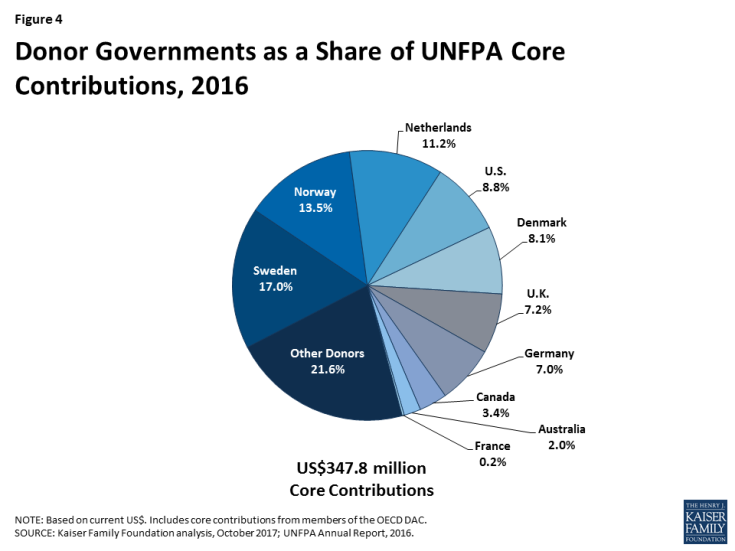 Figure 4: Donor Governments as a Share of UNFPA Core Contributions, 2016

As this report finds, family planning funding initially increased after the 2012 London Summit on Family Planning but more recently has begun to decline and future funding is uncertain.  While this recent decline is due to several factors, including currency fluctuations and the timing of disbursements, even after accounting for these factors, funding in 2016 had fallen to 2013 levels.  Moreover, future funding from the largest donor to family planning – the United States – is uncertain. In 2017, the Trump Administration ended funding to UNFPA and has proposed eliminating all bilateral funding in 2018. While the U.S. Congress has not yet finalized funding for the 2018 fiscal year, but is expected to continue bilateral funding at some level, this downward pressure on the family planning budget is likely to continue.

Against this uncertain backdrop, donors met in London earlier this year to renew their commitments to FP2020. In addition, following President Trump’s reinstatement and expansion of the Mexico City Policy, which requires foreign NGOs to certify that they will not “perform or actively promote abortion as a method of family planning” with non-U.S. funds as a condition for receiving U.S. global health assistance, the governments of Belgium, Denmark, the Netherlands, and Sweden co-organized the “SheDecides” conference in early 2017 to address potential funding losses to broader reproductive health. Whether these new and renewed commitments can increase overall FP funding levels or replace potential declines from the U.S. remains to be seen and ongoing tracking of donor government efforts will continue to be critical.

Bilateral and multilateral data on donor government assistance for family planning (FP) in low- and middle-income countries were collected from multiple sources. The research team collected the latest bilateral assistance data directly for 10 governments: Australia, Canada, Denmark, Germany, France, the Netherlands, Norway, Sweden, the United Kingdom, and the United States during the first half of 2017. Data represent the fiscal year 2016 period for all governments. Direct data collection from these donors was desirable because they represent the preponderance of donor government assistance for family planning and the latest official statistics – from the Organisation for Economic Co-operation and Development (OECD) Creditor Reporting System (CRS) (see: http://www.oecd.org/dac/stats/data) – which are from 2015 and do not include all forms of international assistance (e.g., funding to countries such as Russia and the Baltic States that are no longer included in the CRS database).  In addition, the CRS data may not include certain funding streams provided by donors, such as FP components of mixed-purpose grants to non-governmental organizations. Data for all other OECD DAC member governments – Austria, Belgium, Czech Republic, the European Union, Finland, Greece, Hungary, Iceland, Ireland, Italy, Japan, Korea, Luxembourg, New Zealand, Poland, Portugal, the Slovak Republic, Spain, and Switzerland – who collectively accounted for less than 2 percent of bilateral family planning disbursements, were obtained from the OECD CRS and are from calendar year 2015.

For purposes of this analysis, funding was counted as family planning if it met the OECD CRS purpose code definition: “Family planning services including counselling; information, education and communication (IEC) activities; delivery of contraceptives; capacity building and training.”4 Where it was possible to identify funding amounts, family-planning-related activities funded in the context of other official development assistance sectors (e.g. education, civil society) are included in this analysis. Project-level data were reviewed for Canada, Denmark, France, Germany, the Netherlands, Norway, and Sweden to determine whether all or a portion of the funding could be counted as family planning. Family-planning-specific funding totals for the United States were obtained through direct data downloads and communications with government representatives. Funding attributed to Australia and the United Kingdom is based on a revised Muskoka methodology as agreed upon by donors at the London Summit on Family Planning in 2012. Funding totals presented in this analysis should be considered preliminary estimates based on data provided by representatives of the donor governments who were contacted directly.

It was difficult in some cases to disaggregate bilateral family planning funding from broader reproductive and maternal health totals, as the two are sometimes represented as integrated totals. In addition, family-planning-related activities funded in the context of other official development assistance sectors (e.g. education, civil society) have in the past remained largely unidentified.  For purposes of this analysis, we worked closely with the largest donors to family planning to identify such family-planning-specific funding where possible. In some cases (e.g. Canada), specific FP percentages were recorded for mixed-purpose projects.  In other cases, it was possible to identify FP-specific activities by project titles in languages of origin, notwithstanding less-specific financial coding. In still other cases, detailed project descriptions were analyzed. (see Appendix 3 for detailed data table).

Bilateral funding is defined as any earmarked (FP-designated) amount and includes family planning-specific contributions to multilateral organizations (e.g. non-core contributions to the Global Programme to Enhance Reproductive Health Commodity Security at UNFPA). U.S. bilateral data correspond to amounts disbursed for the 2016 fiscal year. UNFPA contributions from all governments correspond to amounts received during the 2016 calendar year, regardless of which contributor’s fiscal year such disbursements pertain to.

With some exceptions, bilateral assistance data were collected for disbursements. A disbursement is the actual release of funds to, or the purchase of goods or services for, a recipient.  Disbursements in any given year may include disbursements of funds committed in prior years and in some cases, not all funds committed during a government fiscal year are disbursed in that year. In addition, a disbursement by a government does not necessarily mean that the funds were provided to a country or other intended end-user. Enacted amounts represent budgetary decisions that funding will be provided, regardless of the time at which actual outlays, or disbursements, occur. In recent years, most governments have converted to cash accounting frameworks, and present budgets for legislative approval accordingly; in such cases, disbursements were used as a proxy for enacted amounts.

UNFPA core contributions were obtained from United Nations Executive Board documents. UNFPA estimates of total family planning funding provided from both core and non-core resources were obtained through direct communications with UNFPA representatives. Other than core contributions provided by governments to UNFPA, un-earmarked core contributions to United Nations entities, most of which are membership contributions set by treaty or other formal agreement (e.g., United Nations country membership assessments), are not identified as part of a donor government’s FP assistance even if the multilateral organization in turn directs some of these funds to FP.  Rather, these would be considered as FP funding provided by the multilateral organization, and are not considered for purposes of this report.

All data are expressed in US dollars (USD).  Where data were provided by governments in their currencies, they were adjusted by average daily exchange rates to obtain a USD equivalent, based on foreign exchange rate historical data available from the U.S. Federal Reserve (see: http://www.federalreserve.gov/) or in some cases from the OECD.  Data obtained from UNFPA were already adjusted by UNFPA to represent a USD equivalent based on date of receipts.