Community health centers are an integral component of our nation’s health care system, representing the largest source of comprehensive primary health care for medically underserved rural and urban communities and populations. The health center program, which enjoys broad bipartisan support, has grown significantly over time due primarily to expanded Medicaid eligibility and substantial increases in federal grant funding, most recently under the Affordable Care Act (ACA), which expanded Medicaid to nonelderly adults with income up to 138% of the federal poverty level (FPL) and established new private insurance marketplaces and subsidies for people with incomes between 100% and 400% FPL. The ACA also created a special trust fund for health centers, extended in 2015 for two additional years (through September 30, 2017). The 2012 Supreme Court decision on the ACA effectively made the Medicaid expansion optional for states; as of January 1, 2017, 32 states (including the District of Columbia (DC)) had adopted the expansion and 19 states had not.1

This issue brief provides a 2015 snapshot of health centers and their patients. In addition, it compares the characteristics and experience of health centers in Medicaid expansion and non-expansion states, including the coverage profile of their patients, their revenue sources, their service capacity, and changes in these factors relative to January 1, 2015. The analysis relies on data from the federal Uniform Data System (UDS), into which all community health centers must report on an annual basis, as well as data from the 2016 round of the Survey of Health Centers’ Experiences and Activities under the Affordable Care Act, designed jointly by the Geiger Gibson/RCHN Community Health Foundation Research Collaborative at the George Washington University’s Milken Institute School of Public Health and the Kaiser Family Foundation. Previous rounds of the survey were conducted in 2013 and 2014.2

In 2015, 1,375 community health centers in more than 9,750 communities served 24.3 million patients (Figure 1) – nearly 1 in 12 U.S. residents. This patient caseload is more than 10% greater than the caseload just two years ago, in 2013. Health centers serve a diverse, low-income population. Over half (55%) of health centers are located in rural areas and 45% are located in urban areas. In 2015, the vast majority (92%) of health center patients had income at or below 200% FPL ($40,180 for a family of 3 in 20155), including 71% who had income below 100% FPL (Figure 2). Nearly 6 in 10 patients were female. The large majority of health center patients were non-elderly adults (61%) and children (31%), but almost 1 in 10 were elderly. The patient population was also racially and ethnically diverse, with non-Hispanic Whites, Hispanics, and African Americans each making up a sizable share of the total. 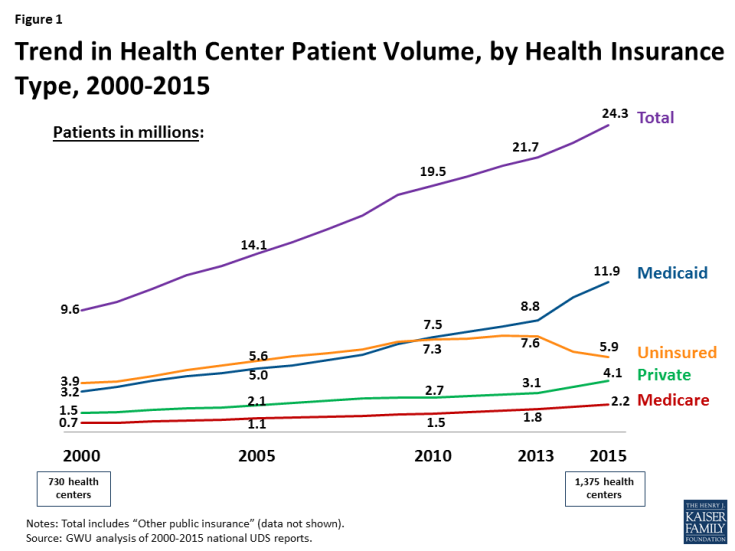 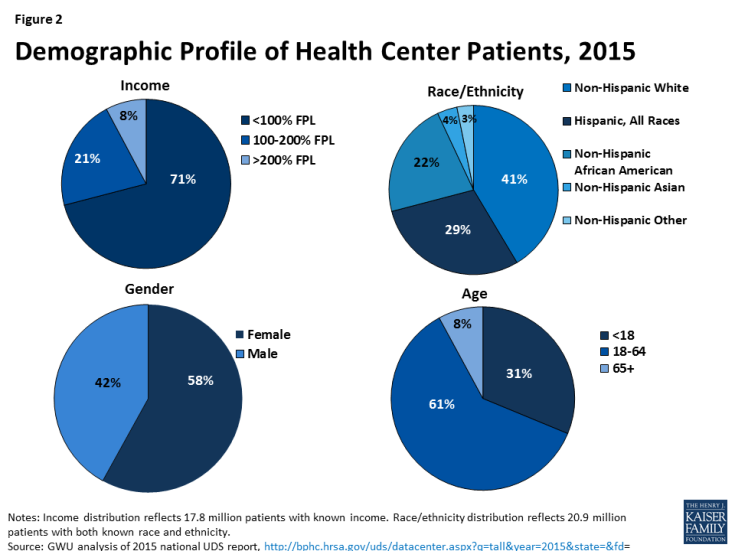 The health center patient population is increasingly insured, primarily due to Medicaid. 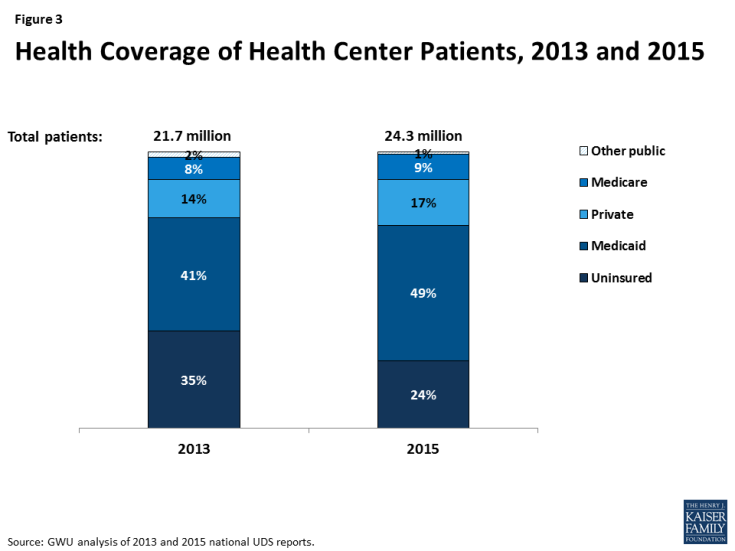 Even with expanded coverage, 1 in 4 health center patients remains uninsured. 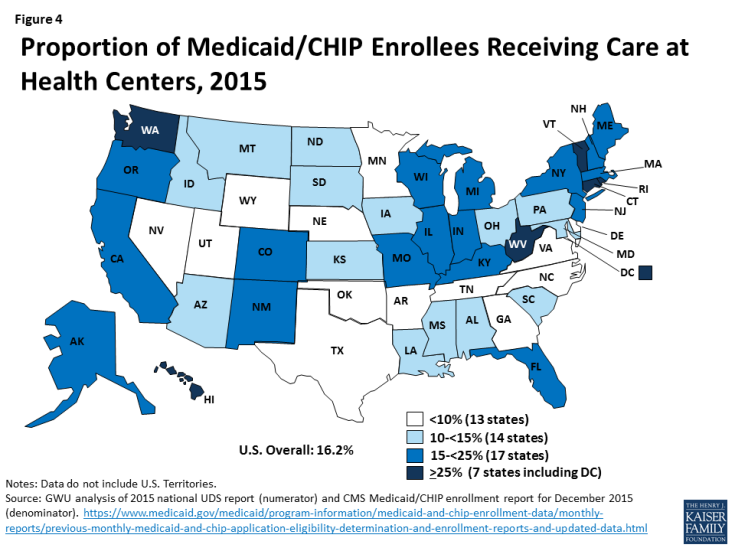 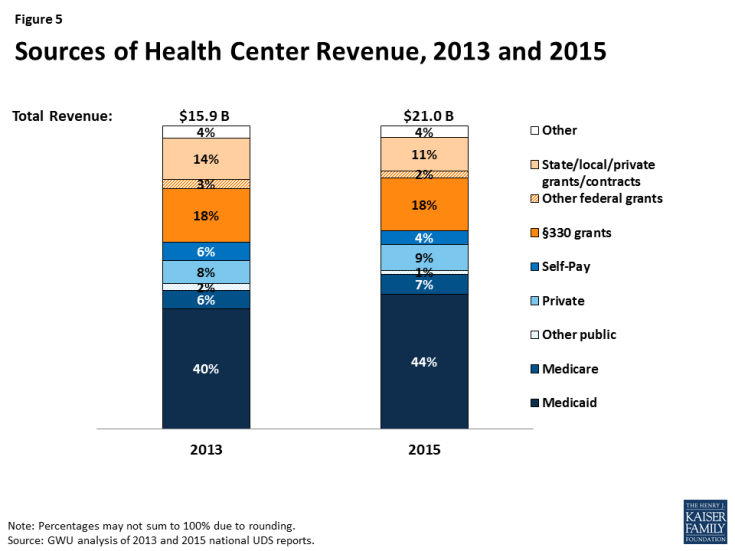 More than 70% of all Section 330 funding comes from the ACA health center trust fund, which Congress extended through September 30, 2017.7 Grant funding enables health centers to provide care for uninsured patients; provide services not covered by most insurance, such as adult dental care, transportation, translation services, and care management; and use sliding fees for privately insured patients who cannot afford their deductibles and cost-sharing. 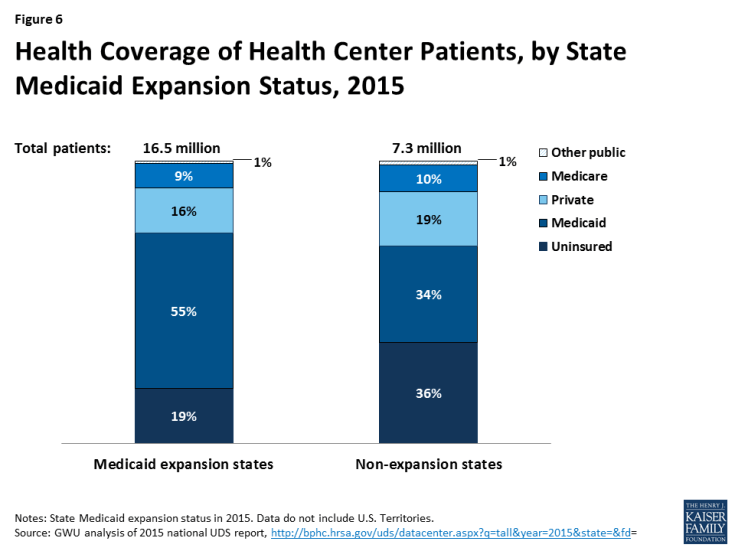 Health center patients in Medicaid non-expansion states are more likely to be uninsured.

Health centers in Medicaid expansion states have higher total revenues, get more revenue from Medicaid, and rely less on grant funding than those in non-expansion states. 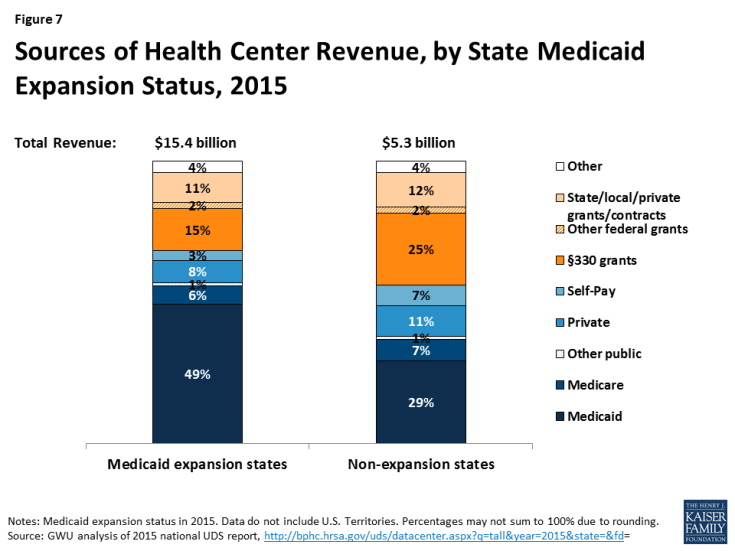 Many health centers report increased coverage lapses and underinsurance among their insured patients, which put pressure on health center finances.

As the ACA enters a period of uncertainty, health centers offer a window into what the ACA has meant for many of the nation’s poorest communities. Increased access to affordable health insurance has led to marked gains in coverage among health center patients, particularly in Medicaid expansion states, and increased direct investment in health centers has led to expanded primary care capacity and access to services. Over a two-year period, health centers were able to add 2.6 million patients – an increase of more than 10% – and expand services such as oral health and mental health treatment, for which there is great need. Notably, even with the progress in coverage, 1 in 4 health center patients remains uninsured, and many insured patients need help with cost-sharing and non-covered services. Thus, grant funding for health centers has continued to be essential both to finance care for uninsured patients and to subsidize insured patients who face high out-of-pocket costs, limited benefits, or both.

The findings from this analysis document the growth in health center patient coverage and health center capacity to serve low-income communities following implementation of the ACA. By extension, the findings also suggest what would be at risk in these communities if the ACA were to be repealed. Increased numbers of uninsured patients, together with the loss of Medicaid revenues associated with the Medicaid expansion and most federal grant funding, would be a severe financial shock to health centers and likely leave them unable to sustain their operations and capacity at current levels. The contraction of health centers would likely leave the most medically underserved urban and rural communities in the nation – for which the health center program was created – with reduced access to comprehensive primary health care.

Additional funding support for this paper was provided to The George Washington University by the RCHN Community Health Foundation.